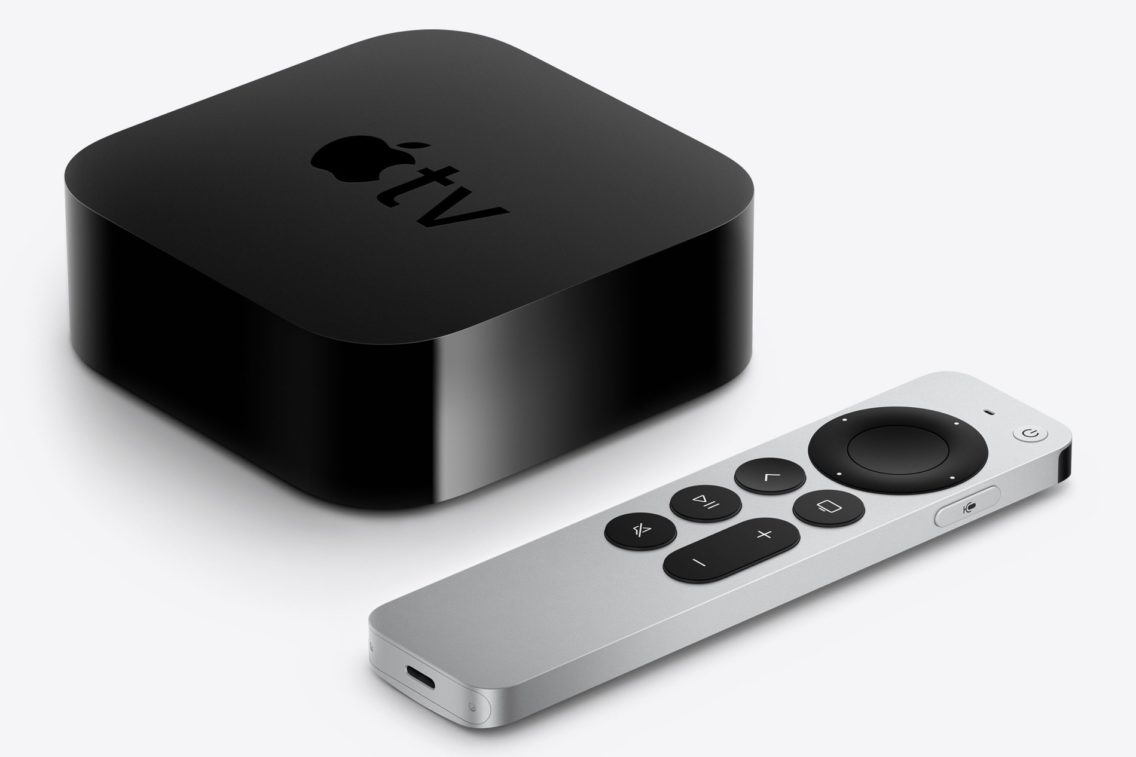 With subtle enhancements to the picture quality and a new remote control, the Apple TV 4K Gen 2 media player shapes up as one of the best smart lounge room companions.

As with many product categories, Apple didn’t invent the streaming media player, but it took it to the next level. When the Apple TV launched in 2007, it brought media players to a wider audience and raised the bar in terms of the user experience.

Google and Amazon later followed suit with their cheaper stripped-down HDMI dongles. They’re also designed to bring streaming video into the lounge room. Today, the three tech giants are competing to be your gateway to the world of online entertainment – with the Apple TV 4K Gen 2 up against Google’s Chromecast with Google TV and Amazon’s Fire TV Stick 4K.

All three devices are on almost equal footing when it comes to streaming services and picture quality. This means the battle mostly comes down to the user experience, where the Apple TV 4K Gen 2 has a few tricks up its sleeve.

At first glance, the box itself has only undergone a few minor tweaks compared to the Apple TV 4K gen 1 (review here 8.6/10) released in 2017.

Apple continues to stick with the traditional set-top box-style design rather than release a cheaper dongle-style device like Google and Amazon. Because we all know Apple doesn’t do cheap.

Thankfully, the compact design doesn’t take up too much room in your home entertainment cabinet. It’s small enough to tuck away alongside or behind a television if need be.

The most obvious change with the Apple TV 4K Gen 2 is the new remote control. It’s a welcome improvement for those frustrated by the trackpad and slender design of the remote released with Apple TV 4K gen 1. Even Apple acknowledges this, selling the new remote separately for $79 – catering to those who love their old Apple TV HD/4K but hate the old remote.

Under the bonnet, the Apple TV 4K Gen 2 has Apple’s A12 Bionic chip with 64-bit architecture. Apple has also upgraded the video port from HDMI 2.0 to HDMI 2.1. This extra grunt and increased HDMI throughput supports High Frame Rate content at 60 frames per second. That’s assuming your television can handle it. The new Apple TV 4K Gen 2 also steps up to WiFi 6 to support smoother streaming.

Increasing the number of frames displayed per second helps smooth out fast-moving action, making it great for blockbuster movies and sport. The problem is that there is precious little content produced or delivered in 60 fps. Almost everything is still 24 or 30 fps.

Hollywood’s trials with High Frame Rate (HFR) have been hit, and miss, such as when The Hobbit was canned after the use of 48 fps made things look a bit fake. Sport is where HFR should really prove its worth.

Put to the test

You can get a taste of 60 fps on the Apple TV 4K Gen 2 via YouTube, Netflix and Red Bull TV. But you need to search hard for content, and the improvement when stepping up to 60 fps is very subtle. The short film Meridian looks spectacular on Netflix in 60 fps on my LG OLED. You can see the difference when switching the video output between 30 and 60 fps, but you need an eye for detail to appreciate it. You also run into that problem where the image looks so crisp it looks fake as if the objects have been pasted into the scene.

I showed these scenes to my family without explaining the frame rate issue, and they also felt that it looked unnatural and distracting. There’s no indication that the broader entertainment industry is rushing to embrace HFR the same way it rushed to embrace higher resolution and dynamic range. It is quite possible viewer backlash will kill it off.

For now, if you’ve got an iPhone 12 Pro in your pocket, it can shoot 4K HDR video at 120 fps. The Apple TV 4K Gen 2 can show in 60 fps if your television is up to the job. As a result, right now, HFR mostly feels like future-proofing for a future that may never arrive. Even if it does, HFR’s improvements are perhaps too subtle – or too distracting – to impress your average punter.

When it comes to picture quality, Apple has added a new calibration feature that lets you point your iPhone at your television to fine-tune the Apple TV 4K Gen 2 colours. To be fair, it’s not exclusive to the new box and is also supported by some earlier Apple TV models.

It’s a nice idea, and you could argue that it will encourage people to pay more attention to picture quality without getting lost in the calibration menus on their television. Or you could argue that anyone who cares enough about picture quality to go to the trouble of doing this would likely go the extra step of actually calibrating their television to look its best.

While streaming video is the headline act, Apple is determined to ensure that the Apple TV 4K Gen 2 is much more than merely a conduit to Apple’s movie library and the various streaming video services. You’re more likely to appreciate the extra grunt from Apple’s A12 Bionic chip if you use the box as a games machine. It also introduces HFR support for games.

Not that an Apple TV 4K Gen 2 is ever likely to steal a PlayStation or Xbox’s pride of place in the lounge room. But the Apple Arcade subscription service makes it a more attractive option for casual gamers.

Apple is also working to tie together its hardware and services, although they’re not exclusive to this Apple TV 4K Gen 2. For example, if you own an Apple Watch with an Apple Fitness+ subscription, you can watch workouts on the Apple TV – with your heart rate and other stats displayed in the corner. Plus you’ve got AirPlay streaming, allowing you to fling video or mirror the screen from iGadgets.

Apple has gone back to basics with a click wheel-style design similar to the Apple TV gen 1 remote, in fact, similar to the very first iPod. It’s large and a little clunky compared to the previous slender remote, but it’s still a welcome change. Forgoing physical navigation buttons for a touchpad on the old remote might have been good for gaming. Sadly, it made for a clunky and frustrating user experience when navigating through apps and menus.

What’s impressive is that the new click wheel is also a touchpad. This gives you the best of both worlds with slick scrolling and precise control. Switching between them grows you on quickly, although you need to take care not to accidentally brush the trackpad with your thumb when navigating through a grid of apps. The ability to predict and ignore inadvertent brushes in this scenario would be helpful.

Sliding your finger around the click wheel also offers precise control when scrubbing back and forth through a paused video. It’s a big improvement on how most other streaming devices behave. Apple’s new remote also introduces power and mute buttons, making it easier to control your television without needing to reach for another remote on the coffee table.

The latest tvOS brings with it a few nice improvements which enhance the overall user experience. While the Apple TV was already strong on cross-platform search, the latest update also improves cross-platform discovery. The “Up next” video home screen now displays a better range of content from a wider range of streaming services. This makes it easier to jump into your favourite shows and see when new episodes are available.

Apple has also added the ability to switch between different user profiles in your household, similar to how you can switch between user profiles within streaming apps like Netflix. It’s a smart move, following the lead of the Amazon Fire TV Stick 4K, in that it makes it easier to treat the Apple TV’s video home screen as your personalised gateway to the world of entertainment.

The Apple TV 4K Gen 2 is a great addition to Apple-centric lounge rooms, especially if you have a 4K television that supports HDR. If you’ve got an iPhone in your pocket and an Apple Watch on your wrist, then Apple’s media player will feel right at home.

If you’re not wedded to Apple, you’ll get more bang for your buck from a Google or Amazon streaming stick. The trouble is that the Apple TV 4K Gen 2 doesn’t offer much of an update compared to the first-generation model, except for the great remote you can buy separately. Many other interface improvements will also come to the existing Apple TV 4K via a tvOS software update.

Support for HFR 60 fps is nice future-proofing if you’re buying your first Apple TV 4K. But if you already own the first-generation model, you wouldn’t bother upgrading. Not unless your television supports HFR and you’re sure you’d make the most. That’s assuming you can even find something you want to watch or play that’s produced in 60 fps, and you like the look of it.

Yes, if I was an Apple-centric home and I didn’t own the Apple TV 4K gen 1.