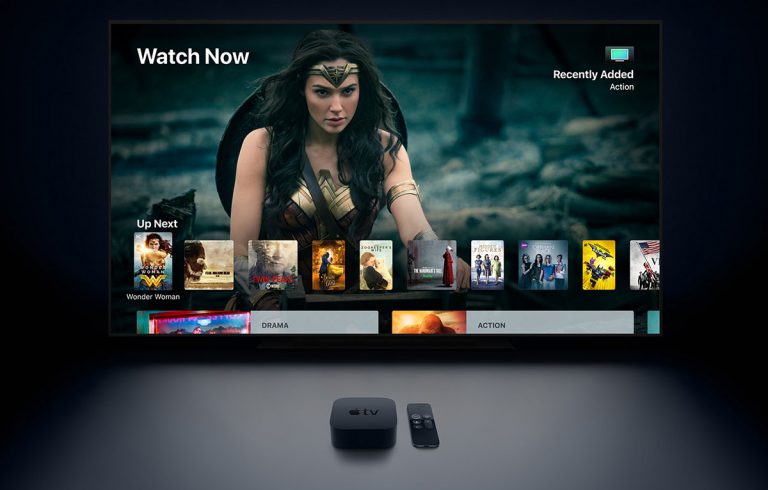 Just about all premium TVs – and for that matter the $899 bargain at your local supermarket – now offer Ultra High Definition resolution. But sources of UltraHD content have been relatively slow to appear. Now Apple has joined in with what might be one of the most important new sources, thanks to a new version of the Apple TV, and an upgrade to iTunes content.

The new Apple TV 4K looks physically the same as the “old” – fourth generation – Apple TV. But it has a whole lot of upgrades that don’t look apparent on the surface.

First, there’s the stuff that Apple is promoting. Instead of full HD the HDMI output of the new model will deliver UltraHD output – that’s 3840 by 2160 pixels. Lower resolution material will be upscaled to UHD if your TV supports it. (HDMI devices always query the capabilities of the devices to which they are connected, and try to match their preferred resolution.)

In addition, it supports HDR and Dolby Vision. HDR – High Dynamic Range – is sometimes known as HDR10. It allows four times the number of steps from white to black compared to traditional formats, allowing for smoother graduations (no more of those paint-by-the-number colour bands) along with even brighter whites as TVs improve in the future. Dolby Vision expands that further, quadrupling the steps again and using “metadata” in the video stream to give the TV information on how best to display the material, scene by scene.

So, where are the movies and TV shows with these magical UHD and HDR or Dolby Vision characteristics? They are in places like Netflix and Amazon Prime video. And in iTunes.

If you rush into the Apple store when they become available on 22 September to buy one (hey, you can order from tomorrow), chances are you won’t be able to stream UHD Netflix straight away. Apple says that the “4K HDR content from popular video services, including Netflix” is “coming soon”. So it looks like they’re putting the finishing touches on a firmware upgrade to get that happening.

More important for those in the Apple entertainment ecosystem, iTunes is offering 4K content. Indeed, there a very important announcement that came with the Apple TV 4K announcement:

iTunes users will get automatic upgrades of HD titles in their existing iTunes library to 4K HDR versions when they become available.

Cool. I paid for “Westworld” in HD on iTunes and I see that it’s being launched on UHD Blu-ray in coming months. Looks like that’s a shoo-in for an early iTunes upgrade.

Meanwhile, the Apple TV 4K has received a whole bunch of serious hardware upgrades. The A8 processor has been replaced with the A10 Fusion, otherwise used in the iPad Pro. The Bluetooth has been upgraded from version 4.0 to 5.0. The WiFi is still 802.11ac but the Ethernet port has gone from 10/100Mbps to Gigabit, which is to say 1000Mbps.

The Siri remote looks like it’s pretty much the same. It continues to pack the dual microphones, the accelerometer and gyro and its rechargeable battery still gets pumped up via a Lightning port.

Apple says that Siri can now understand commands like “Show me movies in 4K”. In addition, the Apple TV App, which integrates content from a wide range of video services, is being rolled out to Australia. It works not just on Apple TV but on other iOS devices.

Apple is also foreshadowing an upgrade to AirPlay. AirPlay is Apple’s “casting” service, allowing music and in some cases video to be sent wirelessly to speakers and display devices. Apple says that with AirPlay 2 “coming later this year”, “Apple TV can control multiple AirPlay 2-compatible speakers as well as your home theatre speakers to create the ultimate home music experience.”

That sounds to me like multiroom capabilities are being built into AirPlay.

Thirty dollars more for the bigger one? That’s what I’d do. With 4K, you’re going to want a big buffer to make sure there’s no interruption to your viewing pleasure.

The old generation 4 Apple TV remains available in a 32GB version for $209.