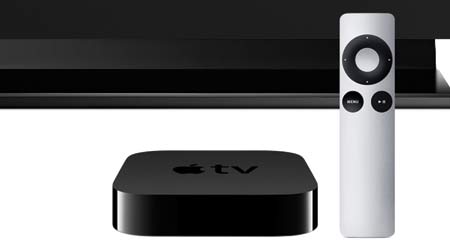 The second generation of Apple’s video serving platform has arrived, three years after the original was released. Looking at it, you’d think the unit was born from a completely different family, so what’s changed?

As with most Apple products, the attention to design is excellent. Apple has shifted from the larger set-top box style to a form factor that is barely bigger than a hockey puck.

Obviously, the change in size has meant that a few things had to go. Unlike the previous Apple TV, there is no longer a hard drive to which you download movies. Instead, everything on the slimmer, smaller Apple TV streams from the web or your computer over a home network.

So you can’t download movies from iTunes to the new Apple TV, and indeed, none were availalbe for sale via the device during our time with it. You can, however, stream movies downloaded to your PC from iTunes and stream them to your TV that way.

Support for Apple’s streaming music controller “Airplay” has been included and requires iTunes to work, but provided your Apple TV is logged into your iTunes account and set for “AirPlay Speaker” on, you can control what music gets streamed from any iTunes 10 installation in your home.

Apple has also redesigned the hardware, shifting the Intel Pentium hardware-based design to one that contains components very similar to that of the iPad and iPhone 4.

Connectivity-wise, you’ll find inbuilt WiFi 802.11n, an Ethernet port and an optical audio output for exporting digital stereo and surround soundtracks to an external AV receiver, an HDMI out for connecting to HD displays and a microUSB port Apple says is for receiving firmware maintenance and repairs.

Much like most Apple products, setup and operation is a doddle. Whether you’re wired or wireless, Mac or PC, you just connect the Apple TV to your network and the device will work. Wired connections involves a network plug, while wireless is automatically turned on and can be easily set up through the settings menu.

Provided you run iTunes on your Mac or PC computer at home, you’ll also be able connect it to your network for media sharing using ‘Home Sharing’. Setup is fairly easy, but requires you be logged into your iTunes account said computer.

The original Apple TV interface has been streamlined to make access and use even easier, yet it still manages to display all the information you need to successfully navigate to various content areas. You can jump straight into a new release at the top of home screen, for instance, or hit up one of the menus to access web features such as YouTube and internet radio, content on other networked computers, device settings, additional movie selections and trailers.

Movies can be browsed by new release or genre, or searched by typing in the name of the film. Once you’ve made a selection, information about the title will display, accompanied by ratings from the Rotten Tomatoes website and links to other movies with the same cast or crew.

We would like the search facility to be more powerful. The categories are standard, but you can browse only alphabetically by title, not by actor or director or some other criteria. Rental period is 48 hours from when you first start watching, and in that time you can watch the video as many times as you want.

The cost and experience
Movie prices sit at $6.99 for a new HD release and $5.99 for a new standard definition title, with older movies costing $1.99-2.99. This is competitive with other online rental services, but the SD service is delivered in the lower quality NTSC 480 standard.

HD movies are streamed at 720p rather than the higher 1080p high definition standard. This is in line with other HD streaming devices, such as some programs via the PS3, and better than the standard definition services currently availalable from Fetch TV, Telstra T-Box and Tivo.

As long as you’re logged into your iTunes account, you can rent and buy titles at will. Pick one, and buffering takes but a few minutes, depending on your connection speed. Provided you’ve got a decent broadband connection of 1.5Mbps DSL or higher, you shouldn’t ever see slowdowns. We’d recommend ADSL2+ or cable just to be safe.

Titles rented from Apple TV comprise the feature film only, meaning you’ll not enjoy the bonus features that might accompany the DVD or Blu-ray version. You do, however, receive some chapter control via a timeline displayed at the bottom of the screen through which you can fast-forward and rewind

What’s wrong
While the entire Australian iTunes movie catalogue is availalbe via Apple TV, TV shows listed for rent from the Oz iTunes were not available during our review period. In addition, some movies from iTunes costs a dollar more than their iTunes store price when rented from Apple TV. So with this Apple TV you pay more to access a library with less choice – is Apple penalising us for leaving our computers?

Then there’s the quirk: all the iMacs in our office fell under the control of Apple TV’s swanky little remote whenever we started waving it about. According to forums, the cause is a function of infrared issues within the computers. While the solution is easy – turn off infrared on your Mac – it’s not going to be known to everyone, and seems like something Apple could have programmed around.

An excellent interface and the ability to conveniently and easily watch movies on-demand (without having to pay a monthly subscription fee) makes the Apple TV a solid choice for those seeking an alternative to the brick and mortar video store. It’s not as capable as the model it replaces, and the entire iTunes rental catalogue really needs to be made available, but at $129, Apple TV is a supremely affordable entertainer.