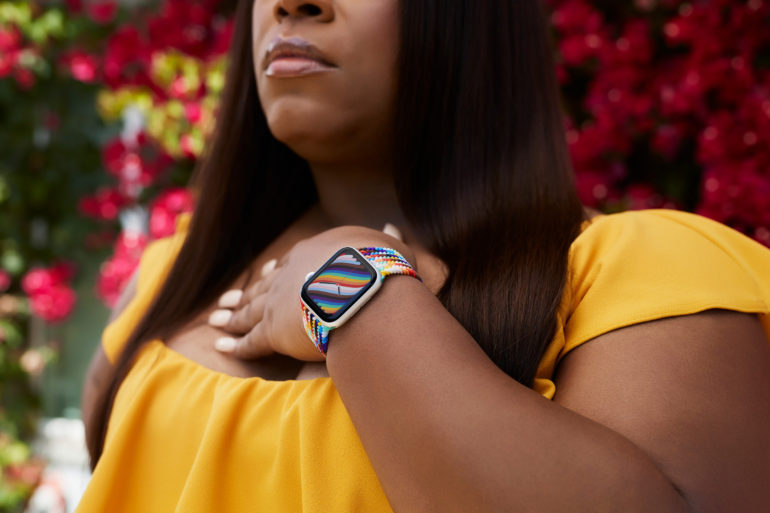 To celebrate the International Day Against Homophobia, Transphobia and Biphobia (IDAHOT), Apple has unveiled a new Apple Watch Pride Edition band and dynamic watch face. They incorporate a broad set of colours inspired by multiple Pride flags which have represented the diverse LGBTQ+ community throughout its rich history.

The Apple Watch Pride Edition Braided Solo Loop combines the rainbow Pride flag colours with light blue, pink and white. These represent transgender and non-binary people. It also incorporates black and brown, to symbolise the Black and Latinx communities, along with those who have passed away from or are living with HIV/AIDS.

“Even before the events at the Stonewall Inn brought the LGBTQ+ movement to new prominence, Black, Brown and transgender activists were key leaders in the march toward equality,” says Apple CEO Tim Cook. “On many fronts, Apple supports the ongoing and unfinished work of equality for diverse and intersectional communities, and we want to provide every opportunity to celebrate and honour this history during Pride season.”

The Braided Solo Loop band is made from stretchable recycled yarn. It is interwoven with silicon threads, removing the need for buckles or clasps. To ensure the best fit, the band is available in 12 lengths. It is compatible with the Apple Watch SE and Apple Watch Series 4 or later.

To accompany the new bands, this year’s Pride watch face mirrors the colours to represent the combined strength and mutual support of the LGBTQ+ movement. The 2021 Pride watch face coming soon as part of a software update for the Apple Watch.

With the rotation of the Digital Crown, the threads on the watch face animate and scroll with a raise of the wrist. Apple’s new App Clip functionality is also included within the band packaging. This makes it easier for customers to immediately access the new matching watch face.