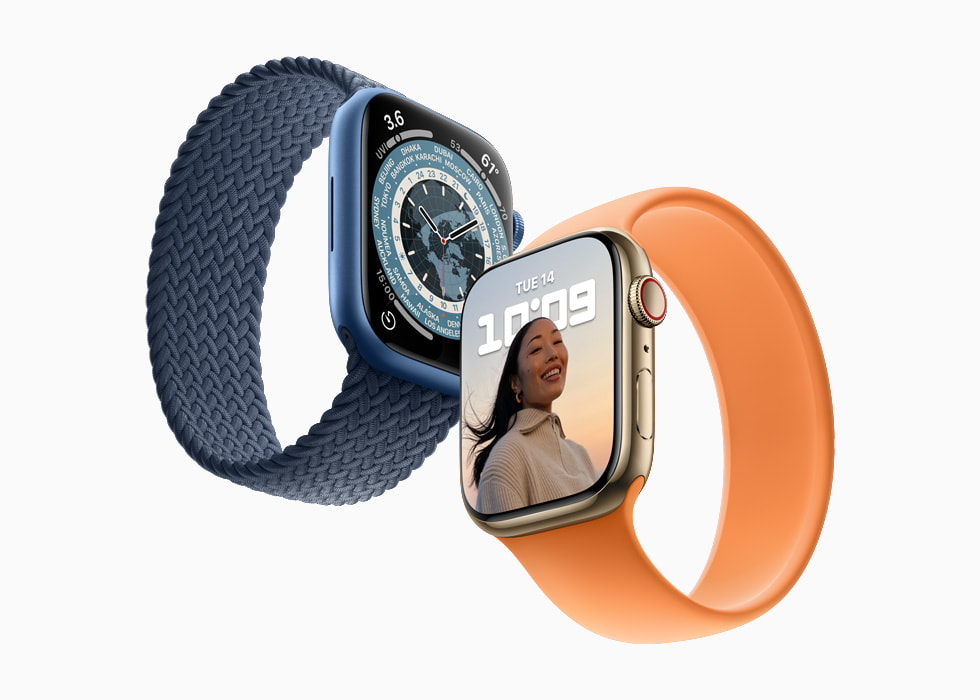 With a larger display, faster charging and more robust design, the Apple Watch Series 7 makes it easier to check on the world at a glance.

Say what you will about Apple, but it knows how to build an elegantly entwined ecosystem. The Apple Watch is the perfect example, so tightly ingrained with all things Apple that you’re practically strapping a mini iPhone to your wrist. Building on this, the ability to use the Apple Watch to unlock your iPhone when wearing a mask is a real game-changer in COVID times.

Of course, the flip side is that Apple’s walled garden has very high walls indeed. The Apple Watch is the most functional smartwatch for iPhone owners because iPhones deliberately don’t share some of those advanced features with non-Apple watches.

At first glance, the biggest change with the Apple Watch Series 7 is a slightly larger display, thanks to much smaller bezels around the edge of the screen. As a result, the watch is available in a choice of 41 and 45 mm displays, up 1 mm from previous models. It doesn’t sound like much but it all adds up. You get almost 20 per cent more screen area than the Series 6 and more than 50 per cent more than the old Series 3.

While you wouldn’t call it petite, there’s a subtle change in the curve of the body and it’s still an elegant design with a choice of aluminium, stainless steel or titanium chassis. As you can imagine, the price goes up as you explore the wide range of construction materials, bands and connectivity options.

Opting for cellular connectivity adds another $150 to the price. This makes the watch fully independent of your iPhone when making calls, sending texts and connecting to the internet. To take advantage of this, you’ll need to sign up for a separate eSIM mobile plan for the watch.

Strap it to your wrist and the 45 mm model seems a bit chunky at first if you’re not used to wearing a large watch. Just like buying a new larger television, the extra screen real estate soon grows on you.

Apple has bumped up the resolution slightly, to ensure the larger screen doesn’t come at the expense of a crisp image. You don’t pay a high price in terms of increased bulk either. The body is roughly 1 mm thicker and wider than the Series 6. Meanwhile, with the aluminium model weighing in at only 2 gm heavier.

The new design is also better equipped to survive some rough and tumble. The screen features a 50 per cent thicker front crystal, which Apple calls “crack-resistant” – something you’ll hopefully never need to put to the test. It’s also IP6X dustproof, along with waterproof to 50 metres.

The always-on OLED display is now 70 per cent brighter indoors when your wrist is down, making it easier to steal a glance at the time.

In terms of hardware, not much else changes from the Series 6, with the notable exception of charging. A fast-charging USB-C cable allows the Apple Watch Series 7 to go from 0 to 80 per cent charge in only 45 minutes. A mere 8 minutes on the charger is enough to provide 8 hours of sleep tracking.

That’s a welcome improvement considering that battery life has always been the Apple Watch’s Achilles’ Heel compared to some rivals. With the Series 7, Apple promises an “all-day” 18-hour battery life, but that’s rather conservative. Taking it off at the end of the day, after wearing it for 18 hours, I typically had 40 per cent charge left even when I’d tracked a workout at the gym. Obviously your mileage may vary depending on how hard you push yourself and the watch.

It’s worth noting that Apple doesn’t include a USB-C AC power adaptor in the box. That’s a bit rich considering that iGadget lovers are unlikely to have many spare USB-C chargers lying around.

Most of the other changes with the Apple Watch Series 7 come via watchOS 8, which is optimised to take advantage of that slightly larger display.

Across the board, you can typically see one or two extra lines of information in each app. This makes for less scrolling. There are also larger menu titles and larger buttons in apps like Stopwatch, Activity and Alarms.

Alternatively, you make everything that bit bigger without sacrificing too much in the way of onscreen detail, with Apple offering two additional larger font sizes.

This all comes in handy if your eyes aren’t what they once were, especially when you’re flicking through workout options at the gym without your reading glasses.

The extra screen real estate also allows for a new onscreen QWERTY keyboard which you can peck at or swipe your finger, with the benefit of predictive text. It works surprisingly well, although it’s a little hard to see the keyboard with your finger in the way.

If you’re already comfortable with using Siri to interact with your Apple Watch, then you’re unlikely to call on the keyboard often. It’s worth noting there are still times when both the Apple Watch and iPhone will respond to “Hey Siri” – even when your phone is in your pocket – despite fact only one or the other should respond. If this problem persists, consider disabling “Hey Siri” on the phone.

There are little gems in watchOS 8, like the ability to ask Siri for multiple timers and give them names. This is really handy when you’re in the kitchen, assuming it works. During one test Siri lost her mind, quietly killed the first timer and almost left me with burned pizza.

As a FitBit Versa owner, my key ongoing frustration with the Apple Watch is still that you can’t receive alerts on the watch and phone simultaneously. If your iPhone is unlocked, it displays notifications. If your iPhone is locked, the watch vibrates and makes a noise – at least in theory – while the phone doesn’t react at all.

Worse yet, sometimes neither device reacts and you miss an important message, typically a text message. My wife has this problem with her Apple Watch Series 6. It’s so frustrating that it’s the primary issue stopping me from switching from a FitBit to an Apple Watch, as much as I love the ability to unlock my iPhone at the shops while wearing a mask.

In terms of health features, there’s not nothing really new here compared to the Series 6. The blood oxygen sensor is still one of the headline features, even though it doesn’t really have a specific use case.

There’s also the electric heart sensor, added in the Series 4, which can capture electrocardiogram (ECG) heart scans, plus it can spot an irregular heart rhythm.

With watchOS 8, the Apple Watch Series 7 can use its built-in accelerometer to track your breathing rate while you sleep. That said, wearing the watch all night doesn’t leave a lot of time for charging. That’s why fast charging is such a welcome addition.

In terms of mental health, there is an updated Mindfulness app with reflections and breathing exercises. Telling you to take a deep breath when you’re stressed or anxious seems clichéd, but it works its magic surprisingly quickly. Meanwhile, Reflect instructs you to “picture gentle ocean waves” or ponder a motivational question, while watching trippy colours dance across the screen. It won’t appeal to everyone.

From a fitness perspective, there are also incremental upgrades, with new workout tracking options for Pilates and Tai Chi. For cyclists, the watch automatically detects when you begin pedalling and reminds you to start a workout. Fall detection is now optimised for cycling and other workouts, with the option to call emergency services if you take a spill.

The Apple Watch Series 7 is a worthy successor to the Series 6, honing and enhancing the slick Apple smart watch design.

To be fair, if you’re happy with the Series 6 then there’s little here to encourage you to upgrade. Yet, if you’re still rocking an older Apple Watch, the bigger jump in screen size makes it a more attractive upgrade – especially if your old Apple Watch doesn’t have an always-on display.

Almost, if I could just be sure that I wouldn’t miss the occasional text message when the Apple Watch and iPhone both fail to respond.