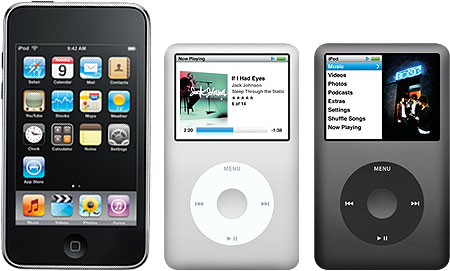 Regardless of what you think of Apple’s particular brand of hype and smugness, it’s hard to argue that the latest generation iPod Touch isn’t an impressive little sliver of technology. Here’s a device so thin it’s actually a fiddle to connect the plug to it, with a higher resolution screen (for its size) than most notebook computers, and a DAC capable of very decent audio output.

Gadgets like the Touch get me thinking about how the listening experience has changed, just over the last ten years. As 2001 opened, the original iPod was still in development (it came out in October), and we were listening to bulky Walkman-style cassette players or portable CD players. The whole concept of digital music was limited to compact disc, and file compression was the exclusive domain of IT super-geeks. Unless you were one of those MiniDisc wonks, but that’s a whole other kettle of magneto-optical obsolescence.

It’s worth remembering that ten years ago, if you wanted to carry around more than 70 minutes of clear, crisp digital music, you needed a bag. Probably a backpack. Or at least one of those wallet things that used to get stolen all the time.

Or you could have taken the analog hit and stuck with the trusty Walkman. Make no mistake: the Walkman did far more than any other device in giving the music industry a kick in the guts. ‘Personal audio’ meant consumers had more hours in the day to listen to music, and so they needed to buy more music to fill those hours. Usually what they bought were really embarrassing Hot Hits compilation tapes in the 1980s, but hey, to the likes of The Knack and Ultravoxx, every royalty counted.

Tape, with its record function, really was the predecessor of how we consume audio today. What we want to listen to, when we want to listen to it. You may have blocked out memories of the experience though. Cassette was pretty terrible: low-fi hissing and popping, and tedious fast-forwarding and rewinding. Three hour tapes (90 minutes to a side) hardly took the curse off it. And there was always the risk of the dreaded gurgling warbling sound, and when you opened the tape deck, metres of unspooled cellulose would spill out like so many technological entrails. Did reading those tangles augur the digital future? Probably – it’s easy to imagine a nascent iPod developer hurling his Walkman across the room in frustration and wishing for something better.

Indeed it’s portable audio that has really driven a decade of change in the listening experience. The CD just works so well in a home environment: fantastic audio quality, a form-factor that’s similar to a paperback book so it works in small shelving (especially compared to those giant papery vinyls), and it’s compatible with all the latest advances in signal processing, amps, speakers etc.

Given how insanely popular the iPod has become in its 10-year lifespan, and how many pretenders have been launched in its wake, it’s kind of odd that mass-storage, file-system based audio hasn’t had a bigger impact on the lounge-room listening experience. Blame the goodness of CD.

Are we about to see a big change in this, though? Your phone can control some high-end stereos, and this will filter down to mass-market systems soon. Online music subscription services are about to explode. Compact systems now deliver big sound.

More importantly, buying music online is now the norm, even if the model is largely geared toward portable audio rather than loudspeaker listening. And why not? I know I’ve caught myself just plugging the earbuds in and bashing out an editorial when I’m at home, rather than switching on the big hi-fi. Even when we at Gadget Guy HQ have a $15,000 system in for review, it often just feels easier to use the iPod.

And that’s about control and content. If starting up the big stereo was as simple as tapping an icon on my phone and selecting an album from a list, of course I’d want to use the superior speakers and the clever amp.

We’ve come a long way from wax cylinders and the crank handle, that’s for sure.