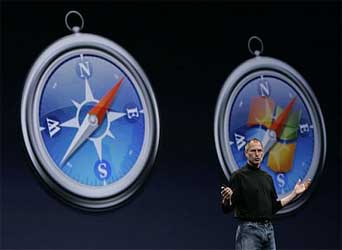 2008 is set to be a busy time for new versions of the major browsers. Microsoft apparently have Internet Explorer 8 close to release, and Firefox 3 has moved through development phases to also be close for release to the general public, but the first next-gen browser relased in the new version of Safari.

Apple today introduced Safari 3.1, which Apple claims loads web pages 1.9 times faster than IE 7 and 1.7 times faster than Firefox 2. It is also claimed to run JavaScript up to six times faster than other browsers, and is the first browser to support the latest innovative web standards needed to deliver the next generation of highly interactive Web 2.0 experiences*.

The incredible performance of Safari, combined with its elegant user interface, lets users spend more time surfing the web and less time waiting for pages to load. Safari features an intuitive browsing experience with drag-and-drop bookmarks, easy-to-organise tabs, an integrated Find that shows the number of matches in a page and a built-in RSS reader to quickly scan the latest news and information.

Safari 3.1 is available immediately as a free download at the Apple website (link opens in new window) for both Mac OS X and Windows users. Safari software updates are delivered seamlessly through Apple’s Software Update application, which automatically checks for updates.

Safari 3.1 for Mac OS X requires Mac OS X Leopard or Mac OS X Tiger version 10.4.11, a minimum of 256MB of memory and is designed to run on any Intel-based Mac or a Mac with a PowerPC G5, G4 or G3 processor and built-in FireWire. Safari 3.1 for Windows requires Windows XP or Windows Vista, a minimum of 256MB of memory and a system with at least a 500 MHz Intel Pentium processor.

*Performance will vary based on system configuration, network connection and other factors. HTML and JavaScript benchmarks based on VeriTest’s iBench Version 5.0 using default settings running on an iMac 2.4 GHz Intel Core 2 Duo system running Windows XP, with 1GB of RAM.