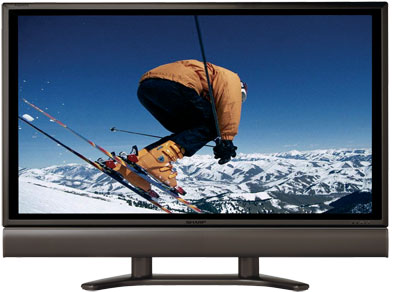 Sharp blows all preconceptions about LCDs out of the water with its monstrous 65 inch Aquos LC-65G5X.

Big screens are great, although the bigger they get, the bigger the pixels on screen. Sharp deals with this issue by upping the resolution of the LC-65G5X to a whopping 1920 x 1080. This makes it the only plasma or LCD in this guide that can handle native 1080p progressive scan high-definition. 1080p isn?t being broadcast at the moment, but we?re sure to see some 1080p content in the form of Blu-ray and HD-DVD movies, which will hit shelves late 2006.

The LC-65G5X also has an impressively fast response time of 12ms, which cuts down on motion blur. The backlight is also specially made to output four different wavelengths, which combine to produce brighter colours and a smoother picture.

It?s massive, and it has an unparalleled specification, but it?s also a monstrous slug to the wallet at over $25,000!