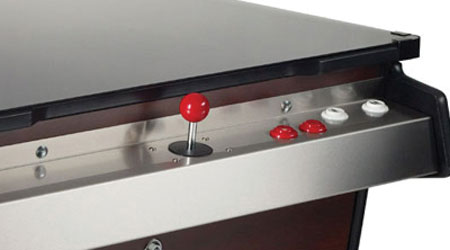 Designed in Australia by Brisbane-based company, Arcade Tables, the ‘Classic’ is the modern day equivalent of a video game machine found in arcades in the 1980s. It’s 100 percent retro, offering only six large red buttons and a couple of red-knobbed joysticks as controllers, and in a nod to the goings-on in most man-caves, it’s topped off with spill-proof glass.

Constructed from plywood, glass, and stainless steel and weighing a hefty 75 kilograms, the Classic Arcade Table will, at 80 x 70 cm, take up a small chunk of floorspace – more than a PS3, but less than a pinball machine. Oh, and it even comes with a pair of retro-style Ikea stools.

In fact, the only real difference between the Classic and similar tables found in commercial venues like pubs and clubs is that it lacks a coin slot, making all of your games free.

Well, not exactly. The Classic under review here retails for $2980, but there is the option to pay it off in monthly installments, which will lessen the ‘ouch’ on your credit status. You can even purchase it using Qantas frequent flyer points – provided you have a minimum of 395,000 in your account.

Arcade Tables offers two other model choices in addition to the Classic – the Custom Classic and the Stealth – all three of which you can customise for an additional cost. You have the option of different finishes, or a LCD or CRT screen. You can also choose to have the legs positioned inside or outside the frame, just in case you want to adjust the height of the table (legs on the outside make this easier). Our review sample came with an LCD screen for $3180, but stock models come with a CRT.

A selection of 60 games has been provided, and there are some great choices available, including Donkey Kong, Arkanoid, Frogger, Qix, 1942, Space Invaders, Galaga and no less than nine variations of Pac-Man.

The Classic supports two players – one on each side – with each player getting control of a directional stick and two red buttons. Player one receives two extra buttons for deciding how many players are gaming, but otherwise there’s nothing else sitting atop the stainless steel trim.

To get gaming, simply open up the cabinet at the bottom, switch it on, and once the menu has loaded, select a title to play. It’s easy to use, exactly how you remember it, and yes, your high scores are saved. There’s also an option to select one game only – something that a pub would opt to use – although you do have to trudge through more than 30 horribly designed menu settings to get there.

Now the Classic is intended to replicate machines from a simpler era, and it does this convincingly and, it has to be said, appealingly. The directional stick supports just eight points around a circle compared to the 360 degree movement of most modern day controllers. The two red control buttons on each side make physical ‘click’ sounds each time they’re pressed, which like the click of the shutter in a film camera is deeply (and strangely) satisfying. And unlike the controls on today’s super-consoles, they not super-responsive: rapid button pressing – like when shooting your way out of a Galaga dogfight – doesn’t translate into an equally rapid release of missiles.

Games run at the right speed, however, and without any lag, complete with sound effects that are pure arcade too – just loud pings, simple digital riffs (a la the Popcorn theme) and explosion noises like the kind that five-year-old kids make when smashing Hot Wheels cars together.

On a technical level, then, the Classic has nothing on a modern gaming system such as the Xbox 360 or PlayStation 3, but anyone looking at owning a Classic probably already has these in their entertainment rack. So the Classic’s raison d’être is to deliver a different type of gaming experience, not one of high resolution graphics or DSP-massaged sound, but one that replicates gaming when gaming was young (and you were too). It did this authentically and enjoyably – especially for the over-30s in our office.

We would recommend, however, that you don’t install it in an area where any level of quiet is necessary. When powered on, the electronics emit a loud hum – a bit like an old fridge – and in the office where our review sample was located, the noise added considerably to the Classic’s already strong powers of distraction.

At a price of $2980, the Arcade Table isn’t the cheapest thrill you can get, nor is it the most sophisticated. It has huge appeal, nonetheless, and once it’s installed in your (or your fella’s) man-cave, you won’t have to keep a pocket full of change to enjoy it.

Overall
Features
Value for money
Performance
Ease of Use
Reader Rating0 Votes
Just like when you were a kid; Sturdy construction
Can’t be upgraded; Setup mode has some of the worst menus ever; Expensive
4.1