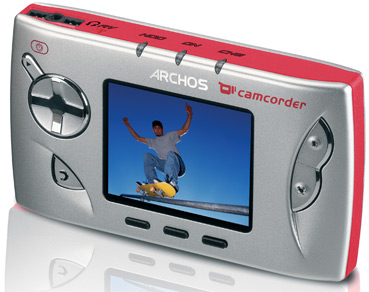 Mike Jones spotted this in his travels and just had to have one. Here’s why.

While all the video world seems to be talking in a binary language consisting of just two letters (‘H’ and ‘D’) and drooling at the bold vibrancy and pixel enormity of high definition cameras, LCD and plasma TVs, and the elusive Blu-ray/HD-DVD players, there is, simultaneously, a popular and, arguably, maturing, shift in the opposite direction. This shift is towards the ultra-mobility, uber-convenience and, in some cases, specific visual aesthetics offered by small, low-res video images.

I am, of course, speaking of the micro-video camera, the personal recorder that slots into a hip pocket and can be carried with the daily ease of a wallet or mobile phone. In many cases such cameras are mobile phones and, while purists might scoff at the viability of low-res video footage captured on such tiny devices, the fact that TV stations now have no qualms about upconverting such footage and broadcasting it as nightly news for major world events, or streaming it live via videophones in war zones (complete with pixilation as a badge of authenticity) says much about our evolving notion of what ‘broadcast quality’ is. Indeed there are reports that some TV news directors deliberately request footage be compressed so as to introduce the recognisable artifacts of low-res, heavily compressed video and engage an audience’s ingrained connection to such footage as immediate, in-the-action and highly-personal.

When the DV format was introduced it was intended as a cheap, quality format for consumers to make home movies on, nothing more. It developed into something quite different, however, as every form of production from docos to feature films and news reporting took to the high-quality, cheap digital format. In many ways, micro-cameras are undergoing the same maturing process. Originally intended as a cute feature for personal use, we are now seeing the low-res standard of micro-cameras being embraced as a desirable production form. Indeed, a mobile phone camera has been used to shoot the full-length feature film SMS Sugar Man, which is receiving very positive reviews.

The range of device options for capturing video of this sort is more varied than perhaps any other format, with mobile phones and the video function on tiny still-photographic cameras being the two most common means of acquisition.

This leads us to Archos, a company best known for their MP3 players and, more recently, hard-disk portable media players. Archos has taken their product line in a new direction, pursuing the popularity of personal video and the media collecting nature of twenty-first century techno-humans. The Archos Gmini402 camcorder adds a video camera to the video playback functionality of the original Gmini and turns the device into a veritable Swiss Army knife of digital media.

The Gmini402 Camcorder (hereafter referred to as the 402c) is essentially a 20GB, ultra-portable, battery powered, USB2.0 connected, hard disk drive with a whole lot of virtual accessories hanging off it! Its incredibly vibrant, full-colour screen gives access to a host of features that begin with being an iPod-rivalling MP3 player (10,000 songs in your pocket and all that). The 402c is likewise a digital photo-wallet with the ability to store and display your digital photo collection, and can connect directly to your digital camera for computer-free downloading. It’s also an audio recorder through both a line-in signal or via the built-in microphone.

I must confess I was knocked into the back of my seat when I heard the quality of the audio recording from the simple built-in microphone. I have never heard anything so good from an in-built mic, especially one not much bigger than a couple of pinheads. Audio is encoded by the 402c in uncompressed .WAV format at a max rate of 48kHz, so it’s identical to DV or DAT audio specs.

The 402c is also a video player, and with plenty of room to store many full-length films or entire TV series – the perfect companion for a bored train travelling commuter. This is taken further by the AV output that allows you to connect the 402c to a TV and watch stored programming from the couch at home. And just to be really complete for the modern age, the 402c is also a portable gaming platform with a host of games available for download. While it’s no rival for the PSP, the games are certainly a cut above your average mobile phone games.

In itself that’s a pretty impressive collection of attributes and personalities, the addition of a videocamera to the unit is really just icing on the cake.

The 402c’s camera allows the recording of video images up to 640 x 480Â  (known as VGA) at full frame rate of 25fps. Whilst slightly smaller than standard definition resolution of 720 x 576 the images are still quite viable for TV viewing and certainly make for superb web video. With a 20GB hard drive at your disposal, it’s feasible to record more than 30 hours of video!

The Archos uses DivX MPEG4 format to encode and compress the video data which, since DivX is a freely and widely available codec, makes video files from the 402c highly compatible and transferable across devices and software tools.

DivX MPEG4 is also a highly efficient codec, achieving a very high degree of quality while dramatically reducing file size. The catch, however, as with any highly compressed format, is the viability of the files for editing and post-production. Strictly speaking, formats like MPEG4 are delivery formats, not production formats. Armed with this technical ‘fact’ as a mantra, the purists among us would scoff at the thought of throwing DivX files on an editing software timeline. But throw them on the timeline you can, and most popular editing platforms that are format-friendly will happily accept and edit these files.

Two issues arise from this process, however, that should prompt users who are considering using such a tiny camera for a creative project to think carefully about their workflow. The first is that, because the original files are already heavily compressed, you have to be careful about the final output format you use, else you risk piling heavy compression on top of heavy compression and ending up with a barely watchable image. Using a very light or lossless codec (DV, AVC-H264, YUV etc) on final render is a smart move to maintain the best possible result from the data-starved image. Of course the trade-off will be much larger files sizes.

The second issue for editing this footage is, that the files being smaller and more compressed than standard DV files, they actually require more computer horsepower to edit. This is because the editing software and the computer system have to unpack the heavy compression on the fly and effectively create individual frames where there is no actual individual frame information in the file.

A fast computer system should avoid these issues by sheer grunt, but you might also choose to transcode all your DivX files to lossless, frame-based formats (like DV or YUV codecs) for editing. The files will be much larger but they will be easier in the system to edit. This process is exactly the same as that often used in editing HDV format material, whereby the MPEG2 transport stream files form the camera are transcoded into a HD lossless format that is easier to edit.

All that said, the quality of the video images on the 402c is remarkably good; smooth motion from the maintained full frame rate goes a long way to pleasing the human eye in an image short on dimen-sions. The images themselves have a very particular visual characteristic that in many instances reminds me of old 8mm film in the way it captured colour and motion blur.

Light levels are, of course, the killer on any small digital camera and the smaller the lens the bigger the problem. While the 402c offers some quite useful manual exposure settings you’re going to want and need to ensure your subjects are well saturated in bright light.

From a usability perspective the 402c is extremely well designed and laid-out. With just a handful of buttons it makes very efficient use of navigation and there is no task, setting or menu option that cannot be accessed in just a click or two.

What is interesting is what Archos has chosen to omit from on the 402c, but which either exists in their other models or would seem an obvious, even necessary, inclusion. While you can play video out to a TV, there is no option to record an AV signal directly into the 402c. All other models in the Archos range (those without videocameras) function as portable DVRs able to tape your favourite shows off the TV for watching on the train to work. Adding this feature would have made the 402c a truly complete portable digital media device. While you can still certainly download from the computer to the 402c the absence of this feature is a real oversight.

The other element that seems odd is the inability to record directly into MP3 audio format. Whilst uncompressed .WAV files allow for the best quality, recording into MP3 saves a huge amount of space and, at high enough bitrates, delivers files that are to the human ear almost indiscernible form an uncompressed WAV file.

The internal file navigation of the Archos is, like much of the interface design, very, very good (the operating system is based on linux) but the system lacks the ability to move files from one folder location to another. This can, of course, be done from the computer when you connect the 402c in via USB as an external hard drive, but is a small and useful feature for the next edition. The 402c has upgradeable firmware so that features like this might well be introduced with a free firmware download.

Placing the video from the Archos next to footage from a HDV camera or even a DV camera is clearly going to show up the size and compression shortcomings of the MPEG4 format, but it would be an unfair comparison as the 402c isn’t designed to compete with these devices. It’s an all-round media player and recorder that slips into a top shirt pocket, rather tha a replacement for your DV or HDV camera and, as such, does all things very nicely.

Compare the 402c to other micro-cameras in its class – those on phones and video functions on digital still cameras – and the 402c comes up very shiny indeed. The quality is indeed proportionally very good, certainly very watchable on both small screen and TV. The sound is quite remarkable and I’d even go so far as to say better than 90Â  percent of the built-in mics on DV cameras.

Any tool has its purposes and a number of tasks it is best suited to. If you’re keen to have a videocamera on you wherever you go, like to challenge the perceptions of how a movie can be made and delivered, and are perhaps interested in taking a video camera to places where a normal video camera might not be viable, then the 402c is an excellent choice – with a host of other talents besides.