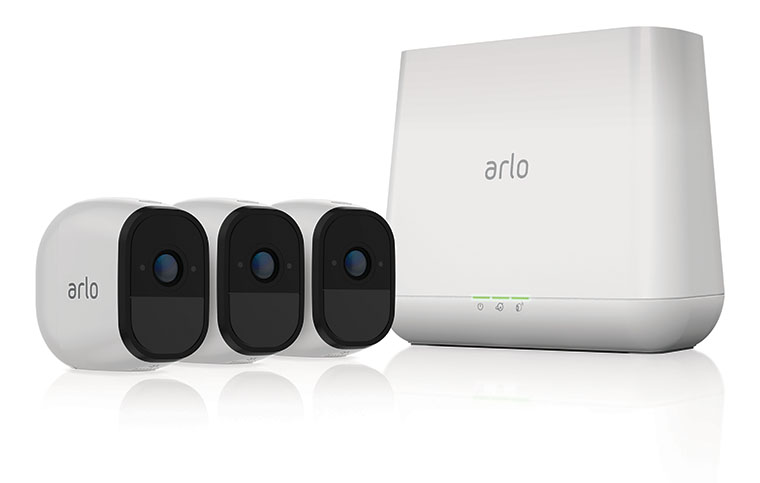 Wireless stuff somehow, seemingly inevitably, ends up needing a wire. Your “wireless” loudspeakers might get their signal from some proprietary or network radio interface, but you still have to plug them in to a power point. That’s why Netgear’s Arlo Pro equipment is so intriguing. Netgear calls it the “Arlo Pro Wire-Free HD Security Camera Systems”.

“Wire-free”? Yes. Network for communications, of course. After all, Netgear is most known for its network infrastructure products. But also wire-free in the sense of not needed to be plugged into a wall socket. Thanks to what Netgear is calling “long-lasting rechargeable batteries”.

The cameras are rain and dust proof, certified to IP65 standard, which means completely dustproof and safe against water jets from any direction. (including those from the sky in the form of rain). And okay in hot and cold weather, with an operating temperature from -20 °C to 45 °C.

The cameras have HD resolution, which is to say 1280 by 720 pixels. They work in colour and their fixed focus provides a sharp image from 600mm out to infinity. They offer a wide 130 degree field of view. Infrared LEDs support night time operation at ranges of up to seven and a half metres.

They deliver the ability to communicate from afar as well, thanks to the built in speaker and microphone.

They also operate as motion detectors, with adjustable sensitivity and the ability to send notifications, including email alerts.

There are four variations on the system: a single base station in each case (with a built in siren) and one, two, three or four cameras. Additional cameras and batteries can be purchased. Wall mounting hardware for the cameras is included.

The batteries which power the cameras are rated at 2440mAh but the camera battery power run-time isn’t stated (because it “varies based on settings, usage, & temperature”). There isn’t even a ballpark figure so I have no idea whether you’re going to have to charge them up hourly (seems unlikely) or monthly (seems equally unlikely). But of course they can be plugged to power as well, so you’ll probably want to do that if power is available nearby.

The remote viewing is via Arlo servers, to which as a system purchaser you have access for free. In addition, your free access includes viewing recordings from the camera for the most recent seven days. I gather that the recordings are triggered by the motion and sound detection systems. You can have up to five cameras on the free plan.

But there’s a “Premier” plan ($12.99 per month) which provides thirty days of access and supports ten cameras, and an “Elite” plan ($18.99 per month) with fifteen camera support and sixty days.

Arlo recommends the availability an Internet connection with a minimum upload speed of 1Mbps. That’s going to be quite the challenge for many, many Australian homes until the NBN monopoly finally makes its way to their area. I, for example, have 0.85Mbps.

Which should make things interesting when I get my hands on a system in a few days to check it out.

Also available are silicon skins ($35) in various colours so that you can better blend them into your home’s external colour scheme, if the standard white doesn’t work.

Arlo Go 2 4G is a mobile security camera for anywhere

Arlo Pro 4 camera kits cash back in November and December