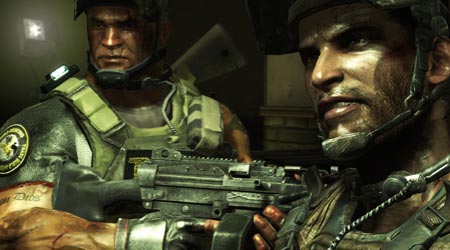 The sequel to EA’s rather disappointing attempt to make a co-op focused action shooter game almost two years ago now, 40th Day starts very badly, with the racist comment ‘I feel tall’ spewing forth from one of the character’s mouths right at the outset, referring to finding himself in China.

The own-foot-shooting is sporadically – but still very, very annoyingly – in evidence throughout this game, with archaic design decisions such as checkpoints that are too far apart, throwing you back to the start without the weapons you’d earned prior to being killed and then, to add insult to injury, making you sit through unskippable cut-scenes that you’ll find yourself forced to watch repeatedly.

But it can be huge fun too, played with a friend over Xbox Live, co-operatively working your way through the Die Hard-ish plot. It looks superb and the ‘morality’ system at least offers up sufficiently difficult choices that you’ll want to play through a second time to see what happens if you take the other path, adding to the quite brief total campaign.

The tagline for the game from EA’s PR geniuses “When a disaster of epic proportions strikes Shanghai…” could easily describe what’s happening to EA’s action games department and the terrible guidance most of their recent in-house releases have been subject to but here, at least, there’s some above-average entertainment.