Around the track with Nissan Z 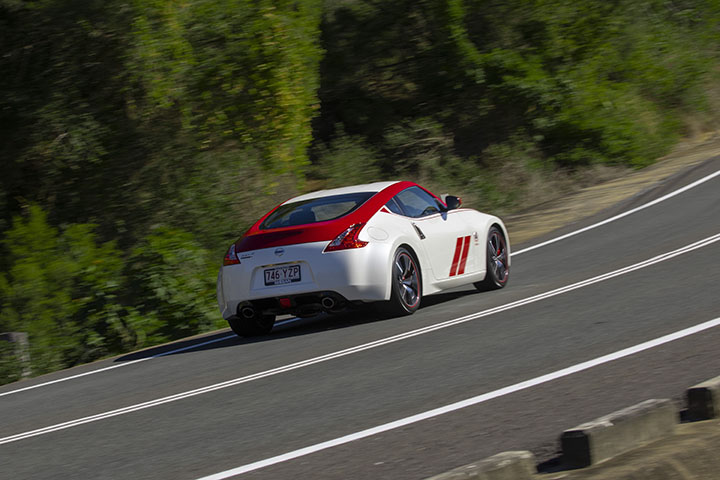 Yes, I get it. The future is the EV – Electric Vehicle. Nissan get’s it too, being a leader on that front. But fifty years ago it was a leader on another front. You see, 2019 is the 50th anniversary of Nissan’s sports cars: the Nissan Z series and the Nissan GT-R series. Last week Nissan Australia ran an event in celebration.

We didn’t see the GT-R series of cars here in Australia for many years, but the Nissan Z series showed up fairly early in the form of the Datsun 240Z.

I was around and old enough at the time to pay attention to such things. The Datsun 240Z was unlike anything else on our roads. Sure, there were some pretty amazing high-performance vehicles around, such as the Torana XU1 and the GTHO Falcon, but they were essentially beefed-up family sedans (albeit, sometimes in two-door form). And there were sports cars, in the form of MG and Triumph. They were cool, but generally not high-performance vehicles. The Fiat X1/9 was a Bertone-styled, mid-engined wannabe supercar, but it was fitted with a normally-aspirated 1.3 litre motor, for goodness sakes.

The Datsun 240Z looked like a sports car – it was a true two-seater – and it employed a 150 horse power 2.4 litre engine. It could accelerate to 60 miles per hour (97km/h) in 8 seconds. That wasn’t GTHO Phase III fast, but it was faster than nearly everything else on the road at the time.

Nissan’s celebration event was at the Norwood track, a private race and test track nestled amongst the sugarcane fields some 40km southwest of Brisbane. Nissan had a bunch of new model Nissan Z series cars – now called the Nissan 370Z – and Nissan R35 GT/Rs. All were liveried in celebratory 50th Anniversary colours.

But also present were the proud owners of older Nissan Z series and Nissan GT/R cars. Many of them permitted us to drive them around the circuit.

Around and around in Nissan Z Series cars

Perhaps the most authentic time-machine experience was in a T-topped Datsun 280ZX. That model was around from 1978 to 1983. The first owner of the 280ZX at the track had died a couple of years after purchasing it, whereupon his family garaged the vehicle for 24 years. On track day, it showed well under 40,000 kilometres on the odometer.

It felt smooth, with a comfortable suspension and snappy, but not rip-roaring performance. It would be fun car for touring.

And there was a real, red-coloured 1970 Datsun 240Z. It also had a lowish odometer reading. The speedo was denominated in miles per hour. It also was snappy by normal standards – we’ll get to abnormal shortly – but it took me right, right back. Although a sports car, if felt very much like a 1970s car. There was the very slim steering wheel with a wood-grain look. It was possibly even made of wood. I find it hard to tell. The five-on-the-floor gear shift was also skinny. But the steering felt fairly direct (even though I think it used a recirculating ball mechanism) and not especially heavy. The brakes needed to be pushed hard, but that was in due to my being accustomed to earlier driving some 1990s GT-Rs.

The Datsun 240Z was just fun. And it looked like fun, too, with a lovely red finish and black interior, and wonderful little quirks like the interior door latch at the bottom of the door panel.

The Nissan Z series started in 1969 and so did the GT/R series. Whereas the Nissan Z series were sports cars from the outset, the GT-R was a modification of a pre-existing road car, the Skyline. The Skyline first appeared in 1957. Its original motor produced a modest power output of 44kW. The first generation of Skyline GT-R bumped that up to 118kW.

We are now up to the sixth generation. Nissan has dropped the Skyline name for the car. The 2019 R35 Nissan GT-R delivers 419kW. Add to that the 632Nm of torque (compare 177Nm of the first generation GT-R) and you have astounding performance.

With a drivetrain to match. Not least is the all-wheel drive.

On the track I spent much of the two laps simply noodling around in the 2019 50th Anniversary GT-R. Why? Because it only took a few seconds to get to the 100km/h speed limit, and for this car one of the main corners was easily taken at 100km/h. But getting to 100km/h so quickly was exciting. In fact, it was extremely easy to drive. The car can be driven in automatic transmission mode so it was pretty much just a matter of pointing and shooting. When cruising, there wasn’t even much to give away the performance on tap, apart perhaps from a greater feel of the road surface.

But I’d push down the accelerator, the engine would growl and I’d be pushed hard back into the seat.

I did laps in the 50th Anniversary Nissan 370Z as well, and it was very nearly as much fun, perhaps a little more so because the car was manual. It also was super-civilised until I lowered the right foot.

What was more interesting was the drive out to the track from the airport in the 370Z. Around halfway we had to pull off the motorway into a side street to swap drivers. I confess: I had forgotten the car was manual. A six-speed manual, actually. I was puttering around the side streets to the correct place for a while before I noticed I was still in fourth gear. It happily pulled from maybe 15km/h in fourth. I found that (if not my driving) impressive.

I went into this with no knowledge of what these cars cost. I was surprised twice. It turns out that the 2019 50th Anniversary Nissan GT-R is basically a $200,000 car – there are five models ranging from $193,800 up to $247,000. The two higher models are performance-orientated “Track Editions”.