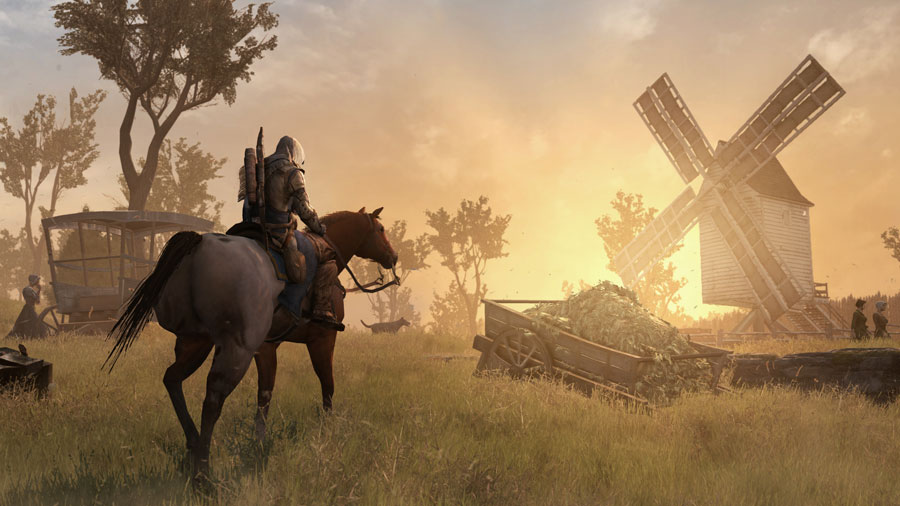 If, like us, you’ve been eagerly anticipating the arrival of Assassin’s Creed III (AC III), be warned that it takes a really, really long time to get going.

For the first few hours of the game, you won’t be playing as the eventual principal character, and in fact you won’t really be playing at all, but rather slowly plodding from one trigger point to another following rigid directions between video ‘cut scenes’ to complete very mundane tasks.

This doesn’t get AC III off to the best start.

As you play more, you’ll quickly discover that AC III is starting to feel more and more like Rockstar’s “Grand Theft Auto” and “Red Dead Redemption” titles, but with game design so loose as to be entirely unraveled.

As before, primary missions are triggered by heading for the exclamation mark symbol on the game map, but these are often hard to locate or at least less than obvious on the dreadful map system that you’ll spend hours just casting around trying to work out what on earth you’re supposed to be doing next.

So not a great start. But AC III eventually puts you in the ‘shoes’ of Connor, a native American character, and accordingly the player has the opportunity to spread his wings a little.

AC III features an enormous variety of gameplay styles: parkour free running, adventuring, armed combat, hunting, collecting, compiling and even sailing. For the most part, these are all enjoyable, and some of them are easily robust enough to spend a good chunk of time playing, away from the main game, just for kicks.

One of the biggest changes – apart from the temporal relocation to eighteenth-century Boston – is the main character Connor’s ability to run nimbly above ground through the trees.

This is great when it works, but it doesn’t always. You will have some moments when everything comes together: Connor sprints through the streets, deftly avoiding pedestrians, leaps majestically towards a building, scales it as swiftly as a lizard, kills a rooftop sentry without breaking pace and continues onwards tracking a bigger quarry.

And then you’ll have moments when Connor stumbles through the environment like a drunkard, smashing into people in the street, hopping uselessly up a wall just inches to the side of the actual scaling point, falling out of trees, jumping onto waist-high fences while being pursued by soldiers, and so forth.

Speaking of control systems, in ACIII the developers have seen fit to overhaul the way you select weapons, send Assassin colleagues on missions and buy stuff, and it’s all perfectly horrible. It’s confusing, hard to navigate and just downright painful to do.

There is, however, a whole lot to do in Asssassin’s Creed III.

The new naval warfare missions can be diverting, challenging you to get alongside and on a parallel course with enemy vessels before you can unleash satisfying volleys of cannonballs, and hunting provides some peacable down time between missions, if you choose to do it, encouraging steatlthy baiting and stalking of your prey (providing what are quite possibly the only true stealth opportunties in the game).

Sadly, though, the biggest issue with AC III is the inability to be stealthy. The awareness levels of enemy characters have been noticeably increased, so they spot you quicker and at greater distances than ever before, and there’s an annoying abundance of timed sub-missions, with the result that the overall gameplay in Assassin’s Creed III is much more action than stealth oriented.

It’s often so hard to remain undetected that, after a few tries, you just give up and end up charging in and getting the job done instead. Even then, unfortunately, the combat system remains the simplistic, slow and frustrating affair of strike-counter-strike it has always been, despite having been tweaked a little this time around.

While this is the latest in a long line of Assassin’s Creed titles, graphical glitches abound, particularly with anything involving hair, and it’s not uncommon to watch characters pass right through one another. The game even outright crashed on us twice, less than halfway through, locked in a perpetual loading sequence.

Assassin’s Creed III is undeniably an epic undertaking, requiring meticulous research and a Herculean programming and artistic effort, and Ubisoft has crammed an enormous amount of game onto the discs.

The bold move to a near modern-day setting is successful, the storyline is hammy but entertaining and there really is a hell of a lot to do.

Perhaps the various issues indicates that the series has outgrown this generation of consoles, and such gargantuan gaming epics will be more at home on more powerful machines; in the meantime, AC III has a lot to offer, even though we wish it was just a little more fun.