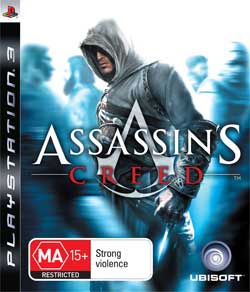 There’s been a lot of hype around this game, principally hype that was meticulously engineered, surrounding that rarest of things in the videogames industry; a young, willing and beautiful member of a development team who not only spoke eloquently and authoritatively about the game in question, but actually looked like she (in this case) might want to play it too. This is all a great thing, and Lo! the generally male-centric videogames media went into conniptions trying to get closer to the truth of what Assassin’s Creed was all about. At least that was their excuse.

But getting closer to Assassin’s Creed, you soon find, is something a lot of people are going to want very much to do. It’s excellent. It starts in a quite unexpected fashion, given what early looks at the game suggested, and then gradually sucks you in, making you feel at once excited, enthralled and intrigued and desperate to explore further, and deeper, into the game.

Excited, because this game looks and feels vast. Early on, your character, placed in Ancient times, discovers the transport of the day, a horse, and you quickly discover how invaluable the horse is in getting around the joint. Cleverly designed as an integral way of moving the game?s storyline forward, the player is compelled to properly explore the game world, including clambering manfully up as many high buildings as possible. This gives your character a tremendous ‘bird’s eye’ view of things and it’s something that never gets tired in the game, as you survey the various kingdoms.

We say ‘kingdom’ to provide ourselves with a neat segue into the next major observation of the game, which is that your character takes on the guise of a kind of medieval superhero, able to run, leap and fight like Batman in a monk’s habit. And that superhero tag is very apt, because Assassin’s Creed plays a lot like some of the more recent videogames based on more recognisable superheroes such as Spider-Man and the Hulk, in that a major part of the enjoyment of the game is to be found in simply running around exploring the huge, virtual world that you find yourself inhabiting. The ‘go-anywhere’ exploration can yield certain rewards too – quite frequently some of the collectable items, such as flags, can be found skulking inconspicuously down a dark alleyway – but quite often the fun of exploration is reward itself.

The intriguing aspect of Assassin’s Creed mostly lies in the story and, since it’d be pretty easy to spoil that for anyone who is reading this and hasn’t yet grabbed a copy of the game, we won’t go into that here. But, thanks to a very cohesive art direction and probably a huge amount of planning, the entire game world in Assassin’s Creed is enthralling and just ‘fits’. As an example, the use of traditional videogame ‘hints’ like signposts, which you find in nearly all games in some form, are inscribed pillars of stone and retain that sense of context, making it all feel very convincing indeed. In play, you just want to press on ever further, trying to get to the bottom of what’s going on. The first time you crest a hill on your horse and see the city of Damascus laid out before you, there’s a real sense of excitement and anticipation, as you realise not just that it?s a huge place, but that you’ll be able to go anywhere and everywhere inside it during your investigations.

The reason it’s so much fun to do all that running and jumping is down to a single French word – ‘Parkour’. Parkour is also called ‘free running’, and is an extraordinary and exhilarating blend of running, jumping and acrobatics that makes the movement of traditional rock climbers look like glaciers. It’s fast, fluid and breathtaking to watch – and Assassin’s Creed lets you live it, with character movement that betters even the superb Prince of Persia games, and makes you feel like a legend.

Like those other superhero games mentioned earlier, it’s true that there’s not much variety in the missions you’re given and the mechanics of achieving results in those missions are quite repetitive. But the excellent story, the incredibly complex, convincing environments, the huge degree of activity in the crowded streets, the tangible tension stalking and dispatching your prey brings, the excitement of the chase and the quite brilliant exploration aspect while free running – all that easily transcends any minor faults and makes Assassin’s Creed an absolutely essential purchase.

This game was reviewed on a PlayStation 3 – the game is also available for the Xbox 360 console.