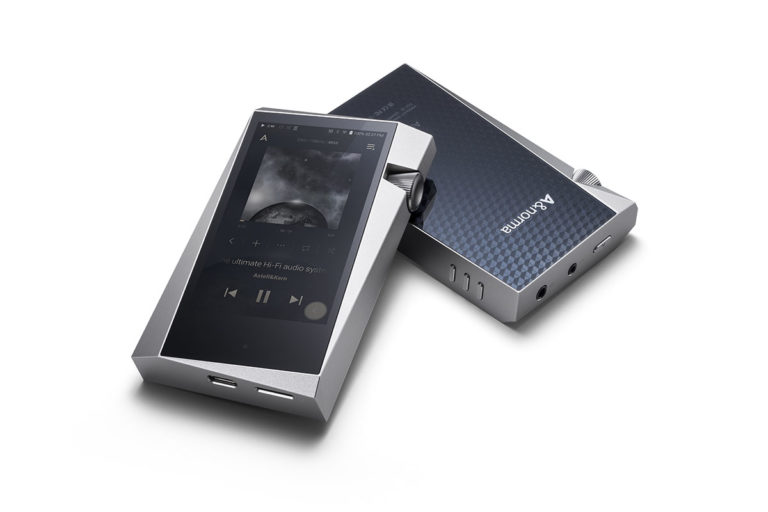 (UPDATE: The Australian distributor of Astell&Kern products has advised me that you can install additional apps on the SR25. But you do that by manually downloading *.apk Android application files. Further, the version of TIDAL pre-installed on the SR25, but it can be updated in this way. I’ve editing this review to reflect this information.)

Long before the Astell&Kern A&norma SR25 there was the iPod. Indeed, let’s go back to 2004. A South Korean company called iRiver had been the world leader in portable digital music player sales for some time. But the Apple iPod, first released three years earlier, caught up and surpassed iRiver’s sales. Within three years the iPod was responsible for more than 40% of Apple’s revenue.

Now the classic iPod is long-since gone and the iOS-based iPod Touch is a tiny bit of Apple’s business. But iRiver lives on in Australia in the form of its wholly-owned subsidiary, Astell&Kern, which specialises in the high-end side of portable audio. Its latest digital audio player is the Astell&Kern A&norma SR25.

The iPod Touch is based on iOS. The SR25 is, like Astell&Kern’s other players, based on Android. But it’s a skinned Android. Unlike some other Android-based music players, you can’t install other music players from the Play Store. You have only what’s provided out of the box (plus anything A&K decides to include in a firmware update). It turns out that you can install additional apps, including such apps as Spotify, Apple Music, Amazon Music, Foobar2000, Soundcloud and many more. But you do that by downloading their *.apk Android application file from a safe site and installing it. I’ll return to this.

What is provided out of the box is pretty impressive. First, for a portable player it’s quite substantial. A&K hasn’t gone for slim and light, but solid and fancy. The body is created from a block of aluminium with 5-axis machining. The front and back are glass. The front is largely constituted by a touch screen. The SR25 comes with four screen protectors in the box. Protective leather cases in various colours are available for $109.

The display has a 3.6-inch – 91mm – diagonal display and a resolution of 720 pixels across by 1,280 pixels vertically. A large rotary volume control dominates the right side near the top. On the left side are forwards skip, backwards skip and play/pause buttons. The top has a power button along with the headphone outputs. One is a standard 3.5mm socket while the other is for 2.5mm balanced headphone connections.

At the bottom is a USB Type-C socket and for charging the unit and accessing its storage. It uses MTP – the Media Transfer  Protocol. The internal storage is 64GB of which around 53GB is available for music storage. Not enough? Also at the bottom is a microSD card slot. According to the specifications, it supports SD cards up to 1TB in size. I used a 256GB card with no problems. You can also plug more storage into the USB-C socket.

There are already six high resolution music files on the internal storage as samplers, consuming 830MB. Two are FLAC format (96kHz and 176.4kHz), two are DSD and two are MQA encoded. That last stands for Master Quality Authenticated, a Meridian-developed system for both certifying the quality of the recording and packing high resolution music into standard resolution file sizes.

Copying a large file to the internal memory of the SR25 proceeded at around 40MB/s. Copying that file back out only ran at 17MB/s. The slow download speed doesn’t matter since there’s little reason to copy from the unit back to your computer. Because it uses MTP, if you have a Mac you’ll need to install Google’s Android File Transfer app on the computer.

The SR25 will play pretty much every commonly available file format, including high resolution ones. Specifically: WAV, FLAC, WMA, MP3, OGG, APE, AAC, ALAC, AIFF, DFF, DSF and MQA. And it supports PCM-based formats of up to 32 bits and 384kHz sampling along with Direct Stream Digital in DSD64, DSD128 and DSD256 forms.

It also includes apps to play Deezer and TIDAL. And “V-Link” which gives access to the likes of YouTube. I’ll stick with my phone for YouTube, given the small screen.

The SR25 includes Wi-Fi, of course, otherwise it wouldn’t be able to provide those streaming services. It also updates its firmware that way. And while for the best quality you’re going to be using wired headphones, it does also support Bluetooth. And for best quality via that channel it offers both the aptX HD and LDAC codecs – assuming your headphones supports one or the other. aptX HD is backwards compatible with regular aptX.

Buried in the settings menu I came across something intriguing: a CD ripping function. Turns out that A&K sells a CD drive which you can plug in and rip directly to the SR25 in your choice of format, including FLAC (Free Lossless Audio Codec – the most popular lossless compression system for music out there). If the player is connected to Wi-Fi, it will populate the ID3 tags with data from the Gracenote online CD database. You can also play CDs.

Listening to the Astell&Kern A&norma SR25

So, how long can you listen on a charge? A&K rates the playback battery life at 21 hours (that’s with CD-standard resolution FLAC files through the 3.5mm headphone socket, the screen off and the volume at 50. Those are reasonable criteria, except the volume setting. Using my favourite over ear headphones, the Focal Elear (80 ohms, 104dB for 1mW) the setting at 50 was barely audible. Switching to more appropriate earphones – the Final Audio B3 in-ear monitors (19 ohms, 102dB for 1mW) – the volume was better, but still way below my normal listening levels. The volume scale goes up to 150. With the B3 earphones, 90/150 was a nice level, and 110/150 for when I was getting into the music. For the Focal headphones, those levels were 110/150 and 130/150.

So, how did music sound? Brilliant. Absolutely brilliant. The SR25 packs a couple of high-end Cirrus Logic CS43198 DAC chips for state-of-the-art level digital decoding. In addition to sounding great and exercising first class control over all the headphones I tried – I used five different brands – the player had sufficient volume to drive even my ancient Sennheiser HD 535 headphones to ridiculous levels.

About the only interruption to my enjoyment of music was when using TIDAL. The player didn’t seem to buffer ahead at track boundaries, so there was often two to five seconds of gap between tracks. Clearly that was far from gapless. Of course, gapless playback worked well with content in the player itself.

I have struck out the last paragraph because Busisoft AV, the Australian distributor for Astell&Kern products, tells me that the version of the TIDAL app pre-installed on the SR25 is an old one. I downloaded the *.apk file for updated one and installed it. That fixed gap problem.

Now let’s talk a little about this. Most of us simply go to the Play Store for our Android apps. The Play Store is run by Google and makes a decent attempt at keeping things fairly safe. You can generally download apps from there without worrying too much if they are infected with viruses or other bad stuff. So if you’re going to download and install apps on your SR25, you’re going to want to be confident about the safety of the site.

I guess the best thing to do is to proceed according the A&K’s FAQ on the subject. It kind of suggests — it calls it an “Example site” for downloads — Apkpure.com.

But even A&K is cautious. At the foot of its FAQ it warns:

Caution – The applications on the list are unknown to source. The installation of app may result in damage to the device and personal data or it might cause security vulnerabilities. Perhaps some functions may not work normally.

Anyway, you find the app you want there. Download it to your computer. Plug the SR25 into your computer and copy the file to the OpenService folder on the SR25. Then you open up the main menu on the SR25, select services and select the newly downloaded app. Tap on it. You’ll get another warning similar to the above. Agree to proceed and soon you’ll have a new version of TIDAL, or whatever, to play.

The output impedance of the 3.5mm headphone socket was pretty much spot on 1 ohm – my calculations over six measurements had it at a mean of 0.9 ohms with a standard deviation of 0.22.

As for output power, the player happily (before clipping*) delivered up to 20mW into 15.9-ohm loads. That means a maximum output of up to 13dB above the headphone sensitivity rating. Say, 115dB SPL or more for typical in-ear models. Into high impedance – 295-ohm – headphones, you can expect well over 13mW or 11dB above sensitivity rating.

When I first started measuring high resolution audio devices in a systematic way, I was a little disappointed about how their high frequency output rolled off quite early. But that’s not the case with the SR25. With 192kHz signals, I measured the output down by just 0.5dB at 60,000 hertz and 1dB at 77,000 hertz. With 96kHz sampling, the output was down by less than 0.1dB at 40,000 hertz. High resolution indeed!

For the all-important 44.1kHz music files, the output was less than 0.1dB down at 20kHz.

(Some listeners prefer a slower roll-off in the high frequencies, which is why so many devices do that. Me? I have never been able to detect a difference between slow and fast roll-offs, so I prefer the more accurate delivery, which is fast.)

I routinely measure a noise floor in devices delivering 16-bit audio of around 96dB or 97dB.

What I found unprecedented was when I measured the noise floor of the Astell & Kern SR25 player using 16-bit audio. It came in at -114.0dB. No way. I figured I’d accidentally selected the 24-bit test. So I ran it again, with great care. Again, -114.0dB. But then I noticed that the measuring software had put the “Dynamic Range” at a more reasonable -97.7dB. The software uses “full black” to test for the noise floor, but for dynamic range it includes a reference 1kHz tone. So I must conclude that the Astell & Kern SR25 player analyses the signal, and if there’s nothing happening it gates the signal to zero, leaving the residual -114dB of system noise. But -97.7 is the more realistic figure with 16-bit audio.

None of that is to criticise the SR25. It’s just an interesting way of dealing with the thing. The reality? Reducing the noise floor from -97.7dB to -114dB creates no audible difference.

The iPod Classic might be dead. High resolution audio is only available from your iPhone or iPod Touch if you use some fancy software and an external DAC. But the Astell@Kern A@norma SR25 provides high resolution audio out of the box, a massive storage capacity and true audiophile performance. If you want high-end audio on the move, accept my recommendation of this unit.

The Australian distributor’s website for this product is here. Price? Need you ask? $1199.

* “Clipping” is where the output of an amplifier is pushed too far, to the point where it chops the tops and bottoms off waveforms. The effect of that is to massively increase harmonic distortion, including nasty-sounding odd-order harmonics.