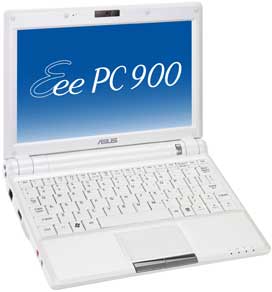 Asus’ second take on the ultra-portable, ultra-cheap Eee PC concept has a lot going for it, including a larger screen, more storage space, Windows XP Home as a standard option and a multi-touch trackpad. It’s still a machine best suited for those needing a supplemental notebook, however.

In pure notebook terms, the Eee PC 900 doesn’t have a lot that really stands up and shouts; a 900Mhz Intel CPU, 1GB of system memory and a relatively poky 12GB of storage space, split between a 4GB primary partition and an 8GB secondary partition. The 900 bumps the screen size up to 8.9″ diagonal, improves the integrated web camera to a 1.3 megapixel model, and offers a multi-touch capable trackpad, allowing you to zoom around documents and resize images – just like the much more expensive Macbook Air.

Like the Eee 700 before it, specification bragging isn’t the point of the Eee 900, however; it’s in the fact that it’s a highly affordable ultra-portable laptop PC; a market where machines typically cost north of $3,000. To sell the Eee 900 for just $599 (or $649 for the Linux version, which sports 20GB of overall storage to the XP version’s 12), while still retaining the ease of transport of an ultra-portable is remarkable in itself.

The 900 fixes one of the major complaints many users had with the 700, namely screen size. The 900 isn’t physically much bigger than the 700, but the screen goes to just about a centimetre from the edge, giving you a much larger (and higher resolution) 8.9″ display to play with. The keyboard remains the same small size, however, which is a challenge if you’re doing lots of typing on it.

You can’t expect stellar performance out of a 900Mhz processor these days, but to its credit, as long as you keep the workload low, the 900 is a pretty snappy performer. Given XP’s longstanding history of slowly degrading over time – especially once you add in necessary components such as an AntiVirus and Firewall package – we’d be interested to see how snappy it remains, but out of the box it was fine for basic web surfing, email and office applications. It comes with the low-rent version of Microsoft Office, Microsoft Works, which at least gives you Word compatibility out of the box. Star Office is also provided.

Windows XP preloaded does give you room to install any other applications you might need, but you do have to be careful if they’re applications that must run from the C: drive. Out of the box, our test unit had around 1.4GB of free space to play with on the C: drive. That can very quickly be eaten up by greedy applications. We attempted to update the Eee with Windows XP Service Pack 3, only to be told there was insufficient space left on C: to uncompress the files needed. Installing to the 8GB D: partition should help alleviate this problem.

The older 700 series Eee came with a Linux variant as the default operating system, along with a Windows XP driver CD. We found it curious that the manual that ships with the 900 still extensively uses the Linux OS for all its screenshots, which could be more than a touch confusing for many users.

Existing owners of the 700 unit probably won’t need to upgrade – the 900 is still an appliance-style notebook, best suited for jotting quick notes or short bursts of travelling. Those on the market for a new ultra-portable laptop shouldn’t overlook the 900, which with its improvements in screen size alone make it one of the best value notebooks you can buy right now.

It’s worth noting that Asus is promising an upgraded version of the 900 with a power-saving Intel Atom processor for later in the year – if you can wait a little longer, there might be a much, much better option in the offing very soon indeed.