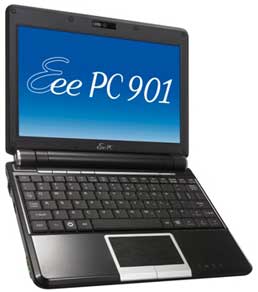 ASUS’ latest update to its popular Eee line of Netbook PCs incorporates some cutting edge processor technologies, along with a slick new design that makes it look a lot less cheap than its predecessors. The same old issues with keyboard size will still stymie some users, though.

ASUS has slowly been evolving the Eee PC concept, and the 901 shares more than a few similarities with the Eee PC 900; the same 1024 x 800 display screen, the same titchy little keyboard, and the same basic 12GB Windows XP Home or 20GB Linux choice – although at least this time either version costs the same.

The 901 does differ aesthetically from the 900, with a smoother, more appealing design that much more positions the unit as one of quality, rather than one where every cost corner was cut. It’s beneath its plastic skin (black or white, depending on your taste) where the real differences lie, though. For a start, the Eee 901 incorporates Draft 2.0 Wireless N networking. 802.11n is still rather nascent, but it’s a great future-proofing technology to have on board.

Moreover, the Eee 901 uses Intel’s latest low-power processor, dubbed the Intel Atom. It’s a low-power, high performance processor – the unit in the 901 runs at 1.6GHz, but uses less power than the processors ASUS used to throw into the Eee at the same time.

As with the entire Eee line, one thing that many users will find tricky to get used to is the keyboard. Beyond some shortcut keys at the top, nothing’s really changed with the 901’s keyboard, which is still tiny. There’s a definite skill to learning to type on something this small, and we certainly wouldn’t suggest using it for very long periods of time. The touchpad on the 901 is mildly improved, although that could just be the better bezel around the keys giving it more click accuracy.

The Atom processor certainly delivered on the performance front; for everything we threw at the XP Home version we tested, the Eee 901 responded very quickly indeed. It’s also possible to alter the performance dynamics on the fly, if you need more battery life, or more grunt as needed. In our tests, we easily went past four hours battery with wireless enabled most of the time. That could be even higher with no network or the screen dimmed down, which is highly impressive.

ASUS sells the 901 with either XP Home or Linux, and once again we’d suggest the Linux model is the better buy; you get 20GB of storage versus 12GB, and fewer configuration issues to deal with. Our test XP machine certainly worked, but you may have to do a lot of fiddling even just to find the space to install updates; by default XP sits on a 4GB partition, which doesn’t give you a lot of space to play with.

The 901 shows that ASUS isn’t just tinkering around the edges of the Eee PC; it’s making some very welcome internal changes to the hardware it’s offering, and in doing so, keeping itself atop the Netbook world.