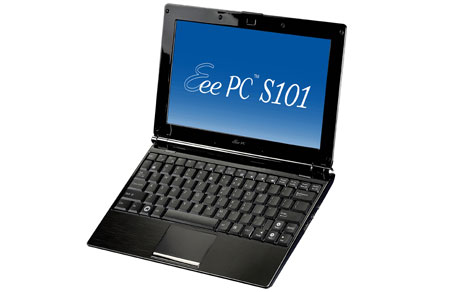 ASUS’ Eee S101H doesn’t advance the technical side of netbooks a jot, opting instead for injecting a dose of style. It’s undeniably possible to get the same performance out of a less elegant unit at a lower price, so the S101H’s value rests on whether you like the style or not.

The S101H is the hard drive equipped version of the S101, a stylish unit that featured only a small flash memory based drive within it. A label on the front advertises the S101H’s “Hybrid” storage approach, although it’s not quite as exciting as that might sound. The basic storage allotment in the S101H comes via a 160GB hard drive that’s internal to the netbook, along with 10GB of online storage capacity provided by ASUS.

Aside from that, the S101H’s recipe is straight out of the standard netbook recipe book. Take one Intel N270 Atom processor, stir well, drop in 1GB of memory and run the whole thing on Intel’s 945 graphics platform with Windows XP Home as the side-salad. The display is the almost standard 10.2″ 1024×600 pixel that most netbooks come with. Name practically any big-brand PC maker, and they’ve got a machine that matches those specifications within a stir or two. ASUS, in fact, has about twelve of them.

The S101H can’t sell itself on pure grunt alone, because it’s got essentially the same grunt as everybody else in the netbook game. Where it attempts to differentiate itself is by not looking as though it’s been made out of old cereal packets painted black, as so many do. ASUS wraps the Eee S101H in a mostly champagne-coloured casing with graphite keys and almost imperceptible Swarovski crystals embedded in the side of the hinges. While it’s undoubtedly a netbook, it doesn’t quite look like any other netbook out there.

With such a basic recipe underlying its construction, it shouldn’t come as any shock at all that the S101H performs identically to its less flashy looking brethren. Netbooks are still small purpose computers, best suited for a little bit of light web or word processing work, and less well suited for intensive visual or graphics work.

We can’t fault the S101H’s basic performance, but we have to note that if it’s just this type of basic performance you’re after, anyone else’s netbook – including models that are cheaper than the S101H’s chunky asking price – perform to the same standard.
ASUS’ Eee lines have often stood out for good battery life, and the S101H didn’t disappoint us, lasting two hours and forty-four minutes under a severe video playback test with the screen at full brightness.

The S101H follows a standard netbook recipe, and stands out only on account of its slim, stylish looks – if that appeals to you. More price-sensitive buyers can save a few dollars on a simpler looking system, but those who want flashy will certainly find it here, and without any particular compromises in the name of style beyond the asking price.

ASUS have also released a pink version of the Eee S101H, in partnership with the National Breast Cancer Foundation (NBCF), supporting the Pink Ribbon cause by donating a portion of each Pink Eee PC S101H sold.