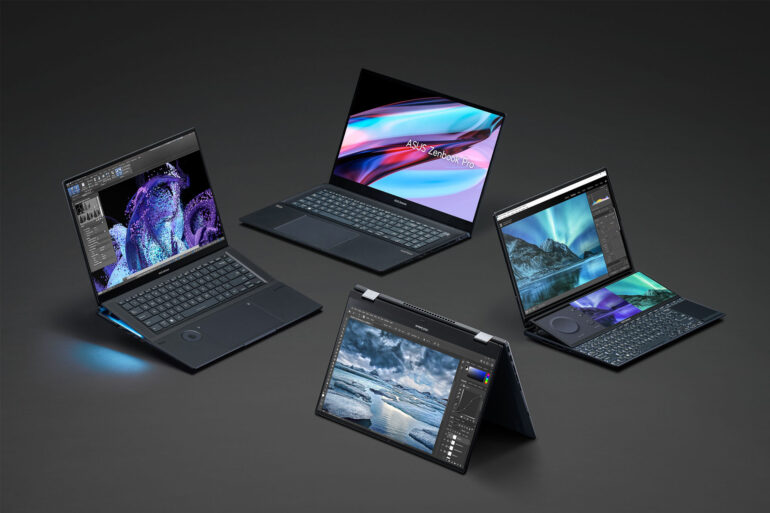 Over the past week, Taiwanese tech company ASUS has unveiled its latest laptops, ranging from the versatile Zenbook and Vivobook lines to the high-performance ROG gaming products.

Beginning with the Zenbook laptops, ASUS revealed the Zenbook Pro and Zenbook S series of laptops powered by 12th Gen Intel Core H-Series or AMD Ryzen 6000 H-Series processors, in addition to the graphical grunt of the NVIDIA GeForce RTX 30 Series of laptop GPUs.

For users who prefer a more flexible laptop, the Zenbook Pro 15 Flip OLED features 360-degree hinges, so you can flip the display over for use in a tablet-like configuration. It’s a little less powerful than its counterparts, with an Intel Arc A370M discrete graphics processor instead of the GeForce GPU series. Rounding out the Zenbook Pro range is the Zenbook Pro 17, the first 17.3-inch Zenbook ASUS has produced. Its 165Hz refresh rate makes it the smoothest display of the lot, plus it runs on the AMD Ryzen 9 6000 series CPU and can be fitted with an RTX 3050 laptop GPU.

These new Zenbooks sit alongside the available Vivobook range of OLED display laptops led by the Vivobook Pro 16X OLED, a more direct Macbook competitor running on up to an Intel Core i9 CPU plus an RTX 3070 Ti laptop GPU.

Also recently announced by ASUS were the latest additions to its Republic of Gamers (ROG) range of gaming laptops. First was the ROG Strix SCAR 17 Special Edition laptop, coming with two 17.3-inch IPS display options: a 1080p 360Hz panel, or a 1440p 240Hz variant. Powered by the 12th Gen Intel Core i9-12950HX processor, the ROG Strix SCAR 17 SE can have up to an RTX 3080 Ti laptop GPU and 64GB DDR5 4800MHz RAM for high-powered gaming sessions.

There is no shortage of portable PC options with the latest ASUS laptops, although local release timings and pricing details are conspicuously absent. Expect to see more details closer to each device’s launch sometime in 2022.