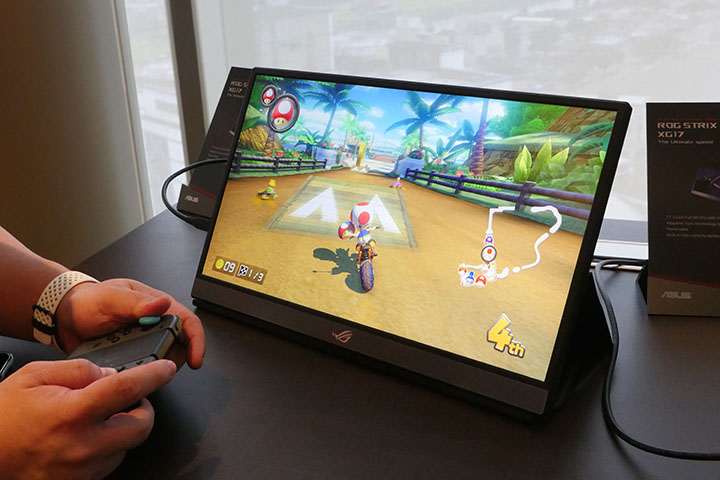 Gaming is all about speed. Speed of the gamers’ reflexes, of course. But the fastest reflexes in the world won’t help if the information is delayed. Which brings us to fast monitors. And, in particular, ASUS’ new ROG STRIX XG17 portable gaming monitor.

Not everything advances in the right direction all the time. For a few years there, one aspect of computer monitor performance went, if anything, backwards.

I can recall the first time I purchased a multisync monitor. That was way back in the 1980s. And it was, of course, a CRT monitor. LCD displays were well and truly only for portable computing. A multisync monitor switches automatically to the refresh rate of the signal it is receiving. As LCD monitors became ubiquitous even on the desktop, multisyncing pretty much disappeared. Almost all monitors were locked into 60 hertz – that’s 60 frames per second. (A rare exception was this one.)

But, as so often happens, gamers came to the rescue. They need monitors which show action fast. That means low latency (that is, little delay between the signal being received by the monitor and the result appearing on the screen) and high refresh rates. Over the past couple of years serious gamers have adopted 144 hertz frame rates.

The ROG STRIX XG17 pushes things well beyond that, all the way to 240 hertz. But of course, the monitor is adaptive. It will match the signal frame rate, all the way from 48 hertz to 240 hertz. Gamers already know this, but for the rest of us: ROG stands for Republic of Gamers, ASUS’ gaming brand.

The ROG STRIX XG17 really is designed for portable use. It comes with a built-in battery. ASUS says that it’s good for three hours of use when the monitor is running at 240 hertz, and longer at lower frame rates. The “17” stands for the screen size. It’s a 17.3 inch Full HD IPS panel with a 3ms response time. Connections include Micro HDMI and USB Type-C, says ASUS.

When I inspected the samples on display later on, it looked to me that the ROG STRIX XG17 had two Display Port compatible USB Type-C connections.

It comes with a “Smart Case”, which folds around in a manner to also serve as a stand. I would have liked to play with it, but the staff made it clear that certain ham-fisted writers weren’t permitted to lay a hand upon the demonstration units.

ASUS says that it is planning to provide a device which will allow the ROG STRIX XG17 to be attached above the regular screen on a gaming notebook, allowing dual-screen convenience. I had the sense that this has yet to be fully thought out, but the concept seems great.

No pricing yet. But expect it to be priced for the very keen enthusiast. This is new, leading edge tech. Keep an eye on the Republic of Gamers’ website for further information.

(The writer attended the ASUS launch in Taipei, Taiwan as a guest of ASUS.)