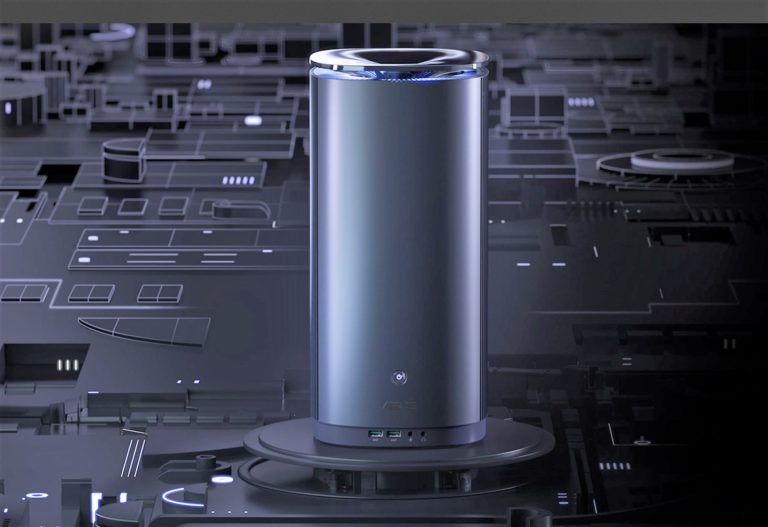 It did not stop there. Two power supplies for its massive Intel Core i9-9900K processor and NVIDIA Quadro Pro P4000 8GB card, four Display Port outputs, and Thunderbolt 3 connectivity. It is the most powerful PC GadgetGuy has tested to date. But Mini it ain’t.

It is a true workstation class PC disguised as a modern speaker!

It targets Mac Pro buyers who want to use Windows 10 Pro instead. A Mac Pro costs from around $5,000 and can hit well over $10K with similar processor, RAM and storage options to the ASUS. I will resist discovering the ProArt PA90 price until I finish the review! So, number one you must be able to flash the cash.

Next, with four Display Ports, two Thunderbolt 3 (40Gbps) and four USB-A 3.1 Gen 2 (10Gbps) ports it is for those who want to hook up lots of accessories – digitisers, pens, external SSD, and more. Greats for designers, still and video editors and creative types.

Finally, it has a unique ‘stay-cool’ system with a ‘pop-top’ that raises and lowers when the CPU temperature rises above 80° allowing 38% more airflow into the chassis. Not that you need it as there is liquid cooling in there as well.

Note: This is a review sample and specifications may change.

You can get an unlocked (overclocking perhaps?), Intel 9th generation Core i7-9700K or an i9-9900K. Both use the new Intel Z390 chipset and have an embedded Intel UHD Graphics 630 as well as the NVIDIA GPU card. Price is around US$500 for the CPU.

The AMD Threadripper 1950X and 2920X just beat the i9 at 21950 and 21334 respectively. Although the Threadripper 2950X is substantially faster again. TechSpot has a good rundown on processor speeds and game frame rates here.

UserBench said this CPU demolishes everyday tasks such as web browsing, office apps and audio/video playback. Additionally, this processor can handle intensive workstation and even full-fledged server workloads. Finally, with a gaming score of 100%, this CPUs is suitable for 3D gaming.

GadgetGuy’s take: Currently the fastest Intel desktop CPU. Gaming enthusiasts are more likely to want the Intel Core i9-9980XE, 18-core but it costs $1500 more and draws 165W TDP, so I think ASUS has made the right choice for its target market.

It also has a 1TB Seagate ST1000LM049 Hard disk. This is the OEM version of the Seagate Barracuda Pro, a 7200RPM, SATA 6 drive. This has a maximum sustained data read rate of 160MBps and is for low-cost storage. try moving large files around here – it is not designed for it.

It has two M.2 (2280) Slots (one with the Samsung SSD) and can support Intel Optane memory to speed up the spinning disk. GadgetGuy has an overview here and for an extra $20 it pays to add a 16GB Optane module.

It has a dual antenna connector on the back and connects to an external antenna (supplied). This minimises the effect of any case shielding or RF interference.

At 2m from our reference, D-Link HT160 enabled AC5300 router we achieved the peak speed – impressive.

It also has a 1000Gbps Ethernet RJ45 port. We did basic file transfer testing of both Wi-Fi and Ethernet. Ethernet is full duplex and achieved nearly 700Mbps, and Wi-Fi is half duplex (standard) and achieved just under 600Mbps. If your router does not support HT160, then expect Wi-Fi to achieve around 300-400Mbps.

Bluetooth is version 5.0 and supports Hi-Res sound codecs as well as SBC.

NVIDIA claims its Quadro Pro P4000 8GB GDDR5 (website here) is the world’s fastest single-slot professional graphics card. It supports the four DisplayPort that in turn each support up to 5K displays (5120 x 2880 at 60Hz) with HDR colour support.

It is VR ready and supports H.264 and HVEC de/encoding on the fly. NVIDIA aim this at video editors, animators, visual effects, and 3D texture painting

It is not a pro gamers card at 1792 CUDA cores but should handle most games well enough. The closest comparison is that it sits between the GTX 1060 and 1070. Benchmarks are here.

The ASUS reviewers guide states, “Although ASUS does not officially support graphics card upgrades, we cannot prevent more experienced users from performing this kind of upgrade, although such modifications void product warranty.  Note that ASUS will also offer the PA90 with the latest graphics cards, such as the NVIDIA RTX series.”

The Intel UHD Graphics 630 embedded processor powers monitor hooked up via the Thunderbolt 3 port and any downstream dock.

Noisy – no it is very quiet

At full load ASUS claim 32dB, and we can confirm that it is whisper quiet. It also remained cool to touch after 12 hours continuous, heavy load use.

In the absence of a manual (which we have no recevied), we tried to boot with one supply, but it did not. This is a relatively power-hungry device.

Also missing are instructions on how to ‘open’ the case for upgrades. I suspect this will be an issue that ASUS needs to address. The guide (also received after the review) states, “The ProArt PA90 supports user configurable hardware for both system memory and storage. The outer chassis can be removed to gain access to two DDR4 SO-DIMM memory slots, and one M.2 slot on the front of the mainboard.

“Slots placed on the rear of the mainboard cannot be accessed without removing the mainboard from the chassis, which will void warranty.”

ASUS has not given a recommended price, but we found it at the lowest price at iFrog (here).

The chances are that all your favourite PC stores (list here) will have it as well.

At the beginning of this review, I said I would not look at the price – until the end. I am pleasantly surprised that this is well below a MacBook Pro and yet offers higher specifications. Although you can’t compare Windows and macOS or programmes developed for each. But if your programmes have Windows equivalents this is the workstation to buy!

I am impressed with the price, performance and ASUS design. I think it is more for business use than gaming – the latter would look to an ASUS Republic of Gaming (ROG) Desktop and an NVIDIA RTX graphics card.

We are waiting to get our hands on the new ProArt PA32UCX 32” 4K HDR Mini LED backlit monitor that is an ideal match for this. It has

In all – would not look out of place on a creative types desk.

Features
Value for money
Performance
Ease of Use
Design
Reader Rating0 Votes
Beautiful design as ASUS are wont to do
Perfect for a workstation or casual gaming
None really
4.8