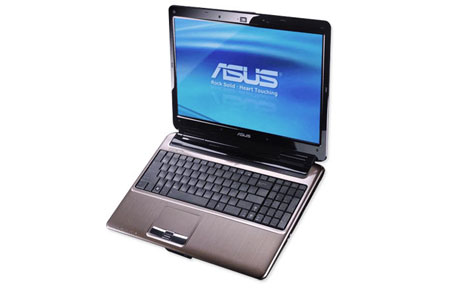 When it comes to choosing a notebook you have three options: grab a super-stylish and super-expensive Apple, pay a similar price for a “top brand” Windows notebook but maybe lose out on style, or go for a cheap-and-cheerful Taiwanese clone.

ASUS might have started life as a clone builder, but its recent models are anything but boring. Stylish design hides a standard – but proven – spec, in a notebook that make it look like you’ve spent a LOT more.

The N51 is actually a series rather than a specific machine. All N51s are inside this rather stylish grey-brown case, but start from this basic spec (the N51VG-S038X) and go all the way up to entertainment behemoths with HD TV tuners and more.

The S038X is an entry-level machine and priced accordingly. For less than $2,000, you get a decent 2GHz CPU, a 320GB hard drive, and basic graphics.

Unlike some other low-end machines though, the N51 includes a 2.0 megapixel webcam, FireWire connectivity, and most importantly an HDMI output.

While the NVIDIA GeForce GT 105M graphics chip won’t be much chop with the latest games, it’s more than capable of handling HD video, and having an HDMI output makes it easy to hook the N51 to a big TV.

Since this is an entry-level machine, we’re not expecting it to win the next world chess tournament. However, it’s testament to the pace of change that the S038X manages to make such a good account of itself.

In fact it’s probably easier to say what the machine CAN’T do, and that’s pretty much limited to playing cutting edge 3D games.

Everything else is well within its capabilities – music or video editing included.

The only real disappointment is the resolution of the display. A resolution of 1366 x 768 is something we’d expect from a smaller machine: 1440 x 900 is what we’ve become used to at 15″ and bigger.

Cheap and cheerful notebooks used to be plastic and ugly. But ASUS has demonstrated in the N51 an ability to combine pleasing (and expensive-looking) style with the flexibility to spec a machine to your requirements and budget.

No, the N51 isn’t especially exciting, and the 2.5 hour battery life is pretty average. But the price is right, the looks are good, and when it comes to a machine for your everyday tasks, beauty and brains win over sheer brawn.

A note on pricing and specs

This is a computer that you can build to your own specs. The price and specs attached to this review pertain to the N51VG-SX038C model.