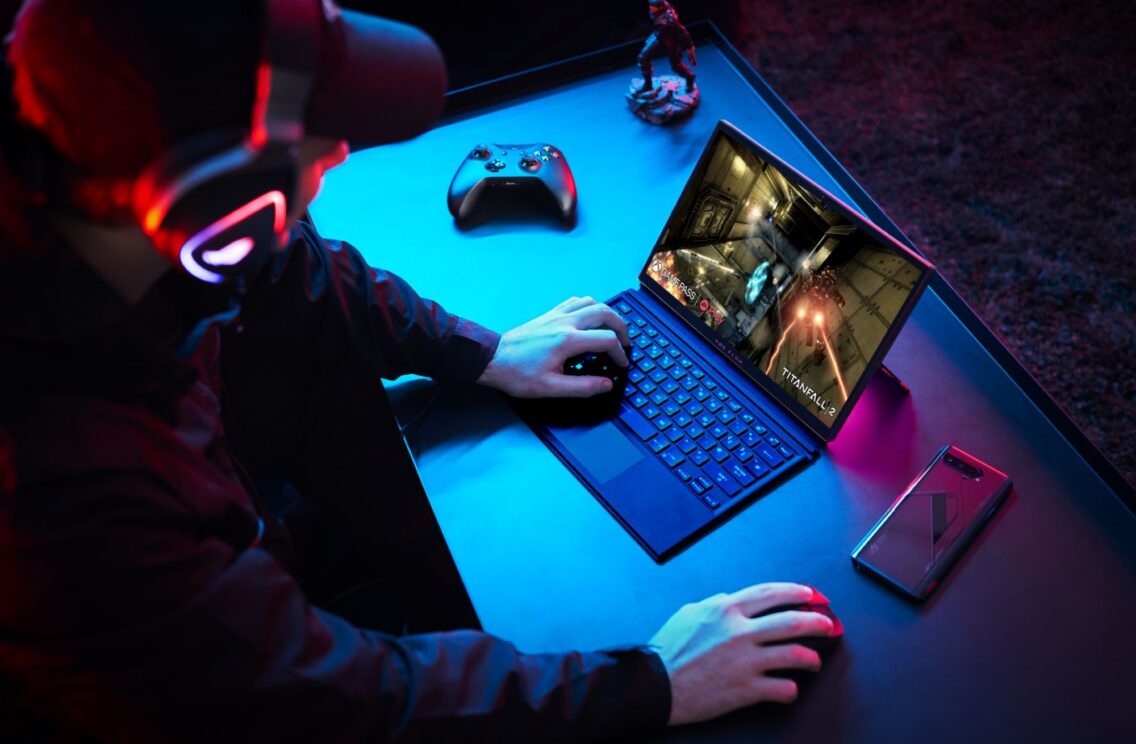 Striking the balance between power and portability is something that PC makers constantly wrestle with, especially when it comes to gaming laptops. After all, high performance parts generate heat and consume a lot of power – all of which fly in the face of portability and battery life.

ASUS, however, has done the seemingly impossible. The ROG Flow Z13 packs one of the most powerful mobile chips in the Intel 12th Gen Core i9 12900H as well as Nvidia’s RTX 3050Ti graphics card into a 13-inch Windows tablet that isn’t much bigger than a Surface Pro 8.

The Z13 has a built-in multi angle kickstand as well as a detachable keyboard and Pen included in the box. The Z13 even supports ASUS’ external GPU dock accessory with a mobile RTX 3080 that, when connected to the Z13, will rival the performance found on larger gaming laptops.

So has the Z13 cracked the portable gaming code?

It looks and feels premium as well with an aluminium frame that’s been tastefully stylised with cut-outs and etchings. By far the slickest design touch is the transparent window on the back that shows off some of the motherboard and is illuminated by RGB lights.

While the Z13 is a little too heavy to hold as a tablet, the built-in sturdy kickstand meant I could comfortably angle the Z13 on my lap or prop it up on a table with an Xbox controller paired, making for an enjoyable way to play PC games.

One other major selling point of this tablet format is the fact that the components are placed behind the screen, and that means that the keyboard folio always stays cool and comfortable to the touch, no matter what you’re running on the device. That’s not the case with other gaming laptops.

Snapping on the detachable keyboard feels just as satisfying as it does on the Surface Pro. Although I would’ve prefered slightly larger keys and a trackpad, the keys offer a surprising amount of travel and, coupled with a slightly taller 16:10 screen, the Z13 doubles as a decent productivity machine.

The 13.4-inch display uses a regular IPS LCD panel with a resolution of 1920 x 1200 and a refresh rate of 120Hz. It’s not as pixel dense as something you would find on a premium ultraportable, but it’s sharp enough and gets plenty bright at over 500 nits.

There’s also a 4K 60Hz display option, but that resolution seems like overkill for a display of this size and will likely result in shortened battery life.

The stereo speakers are average at best. They don’t get particularly loud and are seemingly devoid of any low end while their placement right on the bottom sides of the tablet means the sound can be muffled easily. Although gamers will mostly be playing with headphones on, it is a disappointing result given how great the onboard speakers sound on other tablets like the Surface Pro 8 and iPad Pro.

The webcam is well below the likes of what you’ll find on Surface though in line with what you would expect from a gaming laptop, amounting to some grainy video calls. The webcam doesn’t support Windows Hello to log you in with face recognition, but its side-mounted power button has a built-in fingerprint sensor that worked reliably in my testing.

The Z13 has only three USB ports (2x Type-C and 1x Type A) and a headphone jack as well as a microSD card reader hidden under the kickstand. While that’s more ports than what you would find on other thin and light tablets, it’s a little underwhelming as far as gaming laptops go.

Both of the USB Type-C ports are on the one side with top one being Thunderbolt 4 and the bottom one being USB 3.2 with support for DisplayOut. It would’ve been nice to have a USB-C port on either side to make charging more convenient.

Underneath the Thunderbolt 4 port is ASUS’ proprietary PCIe port, which is where you can plug in the powerful but very pricey XG mobile external graphics dock – more on this later. In addition to boosting the graphical performance of the Z13 to mobile RTX 3080 levels, the dock provides a bunch of extra ports including 4x USB ports as well as HDMI 2.1, DisplayPort, Ethernet and even a full size SD card reader slot.

ASUS claims the Z13 has over 10 hours of battery life, but I couldn’t get anywhere close to that. When used as a laptop for productivity with the screen running at 120Hz, the Z13 lasted under 5 hours. Dropping the refresh rate down to 60Hz didn’t make much of a difference to the runtime.

Compared to the more than 8 hours you get with other thin and light notebooks and even gaming laptops like ASUS’ own G14, this is an underwhelming result.

The Core i9 chip doesn’t exactly sip on power when in standby either. I left the Z13 sleeping on 55 percent battery on a Friday evening and when I returned to use it on Monday morning, the battery had run itself down to just below 10 percent.

The Z13 does at least include a 100w fast charger in the box, juicing up the battery to 50 percent in just 30 minutes.

The i9 12900H is the very same beefy CPU you’ll find in the best and fastest laptops on the market but the big difference is that it’s been throttled to keep temperatures down. While single core speeds remain unaffected, multicore speeds were around 10 to 20 percent slower in synthetic benchmarks. This is still a very impressive result considering we’re talking about such a power hungry and hot chip in a compact 13-inch tablet form factor but those who need all the performance that the Core i9-1200H has to offer should consider a full size gaming laptop.

For the GPU, the Flow Z13 series is available with Iris Xe graphics and an optional Nvidia GeForce RTX 3050 or RTX 3050Ti discrete GPU, which is the model I reviewed. Both RTX chips are Max-Q variants, running at 35W stock and up to 40W with Dynamic Boost. ASUS also added a MUX switch to the design, which helps the performance in certain games.

With the 3050Ti discrete GPU inside the review unit, I was able to play demanding titles like Metro Exodus and Red Dead Redemption 2 at 42fps (frames per second) at the display’s native resolution of 1920 x 1200 and with graphical settings set to high. While older titles such as Witcher 3 will hit a smooth 60fps, you’ll want to drop down the graphical settings to medium in more current AAA titles.

If you have $1699 burning a hole in your pocket, you can invest in ASUS’s XG Mobile eGPU for a significant boost to performance. The advantage in using ASUS’s proprietary connector is that it gives you a more direct PCIe connection to the CPU that utilises the full 8 lanes of PCIe Gen 3 instead of the four lanes you get with a Thunderbolt based external GPU. This means you should get all the performance that the mobile variant of the RTX 3080 GPU has to offer without any real bandwidth limitations.

Connecting the XG Mobile eGPU, the frame rates more than doubled across the board with Red Dead Redemption 2 and Metro Exodus delivering a consistent 103fps at the same settings and resolution. Meanwhile, games like Shadow of the Tomb Raider almost tripled in performance, hitting 150fps and far exceeding the Z13’s 120Hz refresh rate display.

ASUS’s proprietary connector is a chunky one and the cable is very short, making for some messy ergonomics. It isn’t exactly plug and play either. After connecting the XG Mobile, you’ll be prompted to close down all active applications that are using the GPU and thereafter it will take 20 seconds or so for the eGPU to initialise. You’ll also need to remember to remove the XG Mobile from the system tray before safely removing the connector.

Cramming components that you would normally expect to find inside a big and bulky gaming laptop into a relatively svelte 13-inch Windows tablet makes the ROG Flow Z13 nothing short of an engineering marvel. I love being able to just turn on the Z13, pair a controller and get straight to gaming without having the keyboard get in the way. It’s also nice to have the option of plugging in a beefy external GPU when I want that extra performance.

However, the Z13 compromises battery life to get there, falling notably short compared to other detachable notebooks and gaming laptops.

The biggest issue with the Z13 is one of price. The discrete RTX 3050Ti graphics model of the Z13 retails for $3499 and ASUS’s external GPU accessory adds another $1699 to the total. The reality is that the 3050Ti graphics chip doesn’t deliver the performance that PC gamers expect at this price. Springing for the eGPU accessory adds bulk, weight and cost to the equation that makes choosing a similarly powerful gaming laptop a less complicated and less expensive choice.