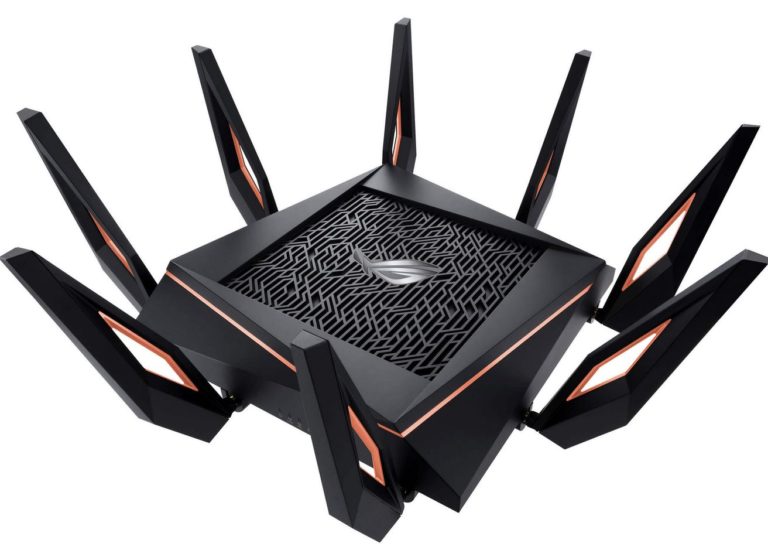 The Asus ROG Rapture GT-AX11000 is a 12-stream, AX11000 tri-band router. It is for big homes, fast Wi-Fi and Ethernet, lots of IoT devices and has some gaming-specific features. And, people that want to show off. Although this review is all about it as a router.

Perhaps the hardest thing about setting up the Asus ROG Rapture GT-AX11000 (let’s just call it GT-AX11000 from here) is screwing on the eight antennae and hoping all are the same, e.g. not special ones for 2.4Ghz and 5Ghz.

First, a segue. I have used Taiwan based-Asus PCs, laptops, servers, motherboards, and components for 30 years. It is my brand of choice and has been super reliable and excellent quality. But this is my first experience with its routers. Strange as I have owned and tested dozens, nay hundreds.

When you ask salespeople about routers, they invariably offer NETGEAR or D-Link first, Orbi, Google, Linksys or TP-Link next.

Perhaps it is because Asus is the province of specialist computer stores (like Scorptec, mWave or Umart) although JB Hi-Fi seems to have more including its Republic of Gamers (ROG) lines. This is a ROG router – it has some additional games features but don’t let that scare you.

Well, my first impression of the GT-AX11000 is overwhelmingly positive. Well-made, great performance and if you are a gamer, its ROG credentials show. If you are not, then you may find the flashing lights and design a little over the top.

Why a big, huge router?

Because you can! If you have $769 to flash around, then there is no better. I cannot find anything to complain about! It is for lots of IoT devices, as part of an AX/AC Mesh system, 4K streaming par excellence and gaming. And I tend to believe that ‘might is right’ where routers are concerned – bigger the better.

Why AX? Well, in brief, it is 4x better in dense or congested Wi-Fi environments, it is 40% faster than AC peak data rates, it is 4x more efficient and uses less client battery life.

Sure if you don’t need the speed, there are plenty of good slower Asus AX and AC routers that also have Mesh capabilities.

But this may, if properly placed, nix any need for an inefficient Mesh setup (tutorial here). It can’t extend the transmission distance (no router can), but it can extend the signal strength.

Mind you it would be a crime to hook it up to anything less than NBN 100/40bps – there is the bottleneck. The Asus Broadcom BCM4908 1.8Ghz SoC and Broadcom BCM 43684 AX chipset and 256MB/1GB, do an excellent job in time-slicing/sharing the internet – even for bandwidth-hungry 4K streaming and games.

It has 4×4 transmit/receive streams on 2.4Ghz and 5Hz (1 and 2) hence it is called a 12-stream router. Basically, that is a 6+6 lane highway that seldom becomes congested.

Add to that all the AX smarts like OFDMA (Orthogonal Frequency Division Multiple Access – choosing the best lane), Beamforming (standard-based and universal), 1024-QAM high data rate and 20/40/80/160 MHz bandwidth aggregation, and you have one fast Wi-Fi router. Catch 22 – if ever you can find a device to use all that. The Samsung Galaxy S20 Ultra and my Surface Pro 7 are AX devices and love it!

Because its tri-band plus gigabit Ethernet you can allocate devices over the three bands and five ports to load share.

You can use the Android or iOS Asus Router app. It is comprehensive, but the small phone screen does not do it justice.

The easiest method is to plug a PC/Mac via Ethernet (so you won’t lose connectivity when you change SSID etc.) – just type HTTP://router.Asus.com and get the login screen.

A Wizard guides you through the basic setup, including router and SSID naming and passwords. For many, that is all they will ever need to do or know. Oh, and write down your admin login and password as well as the Wi-Fi password. You can also enable the guest network. I particularly like it as there are no intrusive privacy policies or mandatory registration or cloud access – 10 points!

But delve further into the menu system, and you may need to consult a rocket scientist. It is also one of the most colourful and comprehensive menus I have ever seen.

Don’t be scared – the default settings are fine but know it can do much more.

The GT-AX11000 must go on a flat surface, preferably with clear line-of-site and Ethernet cable access to most of the major devices. It cannot be wall-mounted. Correct placement will give you a 20-30metre diameter range indoors.

So as far as is possible, we set both up using similar parameters with an AX enabled 5Ghz band. The test device was the Samsung Galaxy S20 Ultra with the Android Network Analyser app.

As I said its not a fair comparison, but it does show that the GT-AX11000 is a faster router with higher signal strength past 10 metres.

In part the issues included

User forums had many comments on the immature firmware and variable performance. But comments over the past few months are positive. Asus’s crime here was to get the router out early for AX market dominance.

By comparison, the NETGEAR RAX120 is up to V1.0.1.122 and is quite stable – a benefit of a later release. D-Link has delayed release of an AX6000 or higher until the AX Standard is ratified.

AiProtection – EXCEED, and it is free

Supplied by Trend Micro and has a lifetime subscription – terrific. But Trend does have access to your router and all it does and sees.

It scans to the router to ensure security; it can block malicious sites; has two-way intrusion protection; a good set off parental controls and more. This alone is worth any premium paid for Asus.

Gamers delight – not tested but the USP of this router – EXCEED

It has Aura RGB lighting with different lighting modes like breathing, colour cycle, and comet

AiMesh Compatible – not tested but EXCEED

While this is a beast, it cannot exceed normal 2.4, and 5Ghz transmission ranges 100/30m line of site and 30/10 metres inside homes typically.

You can add less expensive Asus AiMesh compatible routers and extenders and create a whole-of-home, single sign-on, roaming mesh. We have not tested this and are waiting on some new Asus AiMesh products.

It scans the 2.4Ghz and 2x5Ghz channels to see what channels other Wi-Fi routers are using and allocates the best available channels. In my test, it found dozens of routers in the area and successfully assigned clear space. Impressive.

This provides VPN access to the whole home network without having to install VPN software.

It supports PPTP, OpenVPN and IPSec VPN. If you use NordVPN or Private Internet Access (and others) you can get specific Asus setup parameters from them.

VPN Fusion – not tested but interesting

Allows you to connect to multiple VPN servers simultaneously and assign client devices to connect, or not to different VPN tunnels. Some devices like set-top boxes, smart TVs and Blu-ray players do not support VPN software.

For Gamer, VPN connection counteracts DDoS attacks to prevent your PC game or your stream from disconnecting with game servers. Building a VPN connection also can simply change your IP address to the region where the game server is, to improve your ping to game servers

There are also Asus AiCloud options for remote access.

Voice – PASS but FAIL if you are Google or Siri

Only supports Alexa and IFTTT at present. The voice commands are limited

Ports – EXCEED but would have liked more Ethernet ports

Power – EXCEED and cheap to run

Its big, bold, flashy and fast. And it is the fastest we have tested to date. I would have loved to test the AiMesh option using one of its 5Ghz as the backhaul – perhaps soon when Asus get stock.

I like that you can set the two 5Ghz bands for different modes. During tests, I set one to AC and the other to AX, and that is where you see a big difference. 866Mbps versus 1.2Gbps.

And its feature range is huge. It has every conceivable AX feature you could ever need.

What more could you want? Highly recommended.