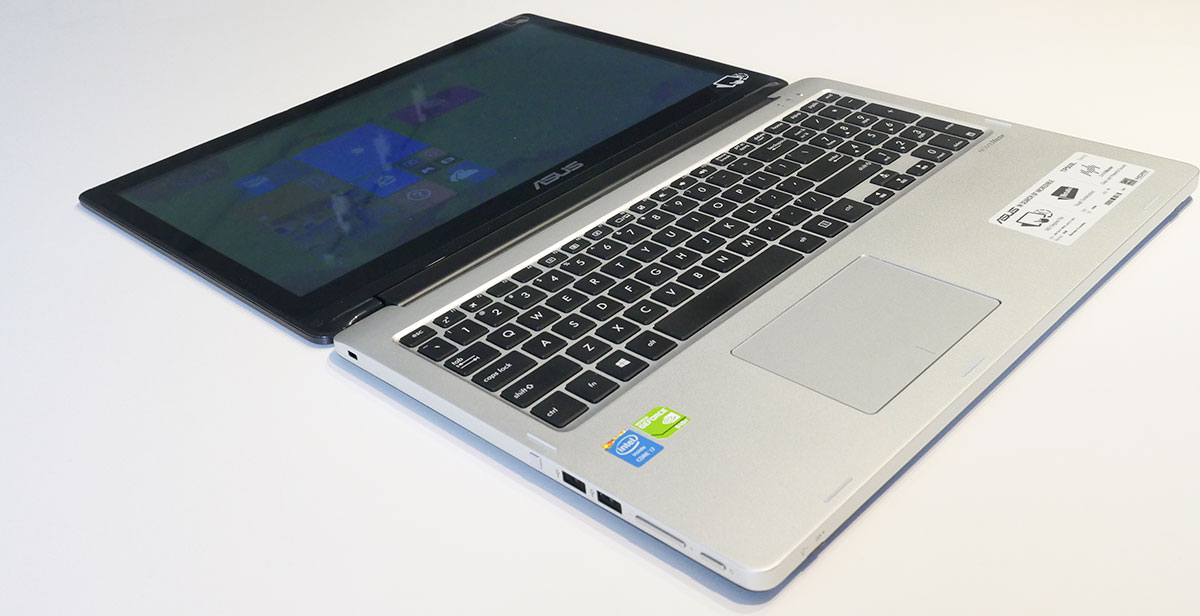 Tablets are laptops these days, and laptops are also tablets, an observation that is evident in the Asus Transformer Book Flip, a machine that tries to marry the best of both with a big 15 inch screen. Does it succeed, or just fall flat?

The latest entry in the long running Asus Transformer series is called the Book Flip, or more specifically, the Transformer Book Flip, and this results in a laptop that can be used in the conventional laptop way (screen perpendicular to the keyboard), tablet (back of the screen pressed up against the back of the keyboard), and even a stand mode (like a tent, with the screen and keyboard facing outward and sitting on the desk like an “A”) for playing back entertainment.

As a result of these needs, you can probably expect a different laptop hinge, but everything else is pretty much all your typical laptop computer, with an Intel Core i7 quad-core processor found inside this computer, from the fourth-generation known as “Haswell” and clocked at 2GHz (i7-4510U). Alternatively, a Core i5 (4210U) variant can be found.

Memory in this computer is set to 8GB RAM, with storage set to 1TB, though both of these can exist in different amounts, with memory set to either 4 or 8GB, and hard drive storage options including 500GB, 750GB, 1TB, and 1.5TB, with solid state storage of 24GB also an option alongside each of these.

Graphics on this notebook run on Nvidia’s GeForce GT840M processor working with 2GB RAM, while other multimedia features include an SD card slot, VGA webcam, and the Asus SonicMaster sound technology.

All of this helps run a 15.6 inch touchscreen running the high definition resolution of 1366×768.

With the laptop also working as a tablet, you’ll even find a few more buttons than a conventional laptop has, with the power button being joined by a volume button on the left side, as well as a Windows button moved from its regular centre screen position (which in this machine is occupied by an Asus logo) and found on the left edge with the rest of the buttons.

The hybrid market has helped revitalise the laptop world, and Asus was one of the original companies there, starting off with Android tablets that could be docked with keyboards to make notebook hybrids.

A few years later, the reinvention of Windows that is Windows 8 has pushed more new life into the notebook space, and Asus is here too, taking its designs for hybrid machines into several styles and sizes of computers that can be both a conventional laptop and even a tablet.

In the Transformer Book Flip, Asus is taking that concept and pushing out a 15 inch machine, bringing the large screen size for people that prefer bigger screens, and also want more than just the small amount of space a solid-state drive will offer, with around 1TB in our review machine, and as much as 1.5TB offered in some of the spec’d models you can buy.

Design-wise, though, Asus isn’t exactly coming up with anything new, taking a conventional laptop and adding a 360 hinge.

It’s familiar territory that we’ve seen time and time again from quite a few manufacturers, and here, it’s an oversized machine with the concept.

Materials used here feel like aluminium for the lid and the palm rest, and then plastic for the rest of the body, which comes off feeling fairly strong, though also not terribly durable, and we suspect that feeling is coming from the plastic. The metal body also feels like a casing what than a body made from the material like you get in other computers, letting down the feeling a touch.

Performance of the machine isn’t bad, though, that said, with quick on times, and enough guts to let you get some work done, as well as the odd game.

Nvidia’s GeForce 840M isn’t going to be ideal for every game title you throw its way, of course, but if you wanted to do a little bit of gaming, the combination of a mediocre screen resolution and the graphics card on offer will still let you get something done.

Over to the keyboard, and for the most part, there’s a decent set of keys here, with enough travel to be comfortable, though the keys do have a fair amount of bounce and spring to them. It’s not enough to be considered one of the best keyboards we’ve seen, but it’s also not bad, with Asus going with a full-size black and silver keyboard that you could seriously get some work done on, though its keys don’t always register consistently, and we would lost a character every 400 words or so.

The mouse isn’t bad either, with a gesture-ready touchpad beneath the keyboard that seems to offer enough room to move for your fingers, though it is, of course, a secondary mouse.

Secondary to the touch offered by the display, which is where the Asus Transformer Book Flip starts to go horribly wrong.

Screens are the main section of a computer you look at, and It is the main section a tablet is generally based around, and yet here, Asus has opted for something low-end and below par in as far as hybrid devices often go.

That might have been fine five or six years ago, but now it feels downright cheap, especially since this is a resolution often provided to 7, 8, 11, and 13 inch computers, and it’s not even a great resolution on the last two sizes.

But on a 15 inch machine, we can’t help but feel like we’re missing out, and while you do still see the high definition resolution on 15 inch computers, it’s generally the sort that cost at most $500, not the around-$1000 mark where Asus has positioned the Transformer Book Flip. Just no, Asus.

Not helping this poor resolution is the panel choice, with only dead on making this screen look decent, and angles — any angle, really — showing this display for what it is: horrible.

How this would be an acceptable tablet is beyond us, because while we can ignore the idea of a 15 inch two kilogram tablet (which we can’t, and we’ll get to shortly), a tablet with such a woeful screen is hard to even consider. Just put it on your lap and you see why, with extreme colour washout due to the disastrous screen.

Seriously, even if Asus wanted to stick with a low-resolution panel — which it shouldn’t — it could have opted for a better grade screen, and one that is actually usable at angles, one of the obvious requirements of a tablet.

Most people will probably use this machine as a laptop, though, and in this capacity, the screen hinge seriously needs tightening. Touch the display and it wobbles. Touch it again, and it wobbles. Wobble central here, with the shaking and shimmering only going away when the hinge — which is one of the primary features on a hybrid that flips into a tablet — is presses the screen back into the body to work as a tablet. A two kilogram tablet.

Again, we have issues with a two kilogram tablet because simply put, tablets are supposed to be easy to carry with you, and easy to use.

As a laptop, the two kilogram Asus 15 inch Transformer Book Flip isn’t totally hard to take out with you, but as a tablet, good luck gripping all 15 inches with easy, and unless you have well built finger and hand muscles, try to enjoy lifting this thing.

While the specs are decent and the keyboard isn’t bad either, Asus really lets down hybrids with the Transformer Book Flip, which is a shame, since Asus practically invented the hybrid laptop area.

We can’t stress just how bad the screen in this computer is, and while we’re not surprised to see this style of screen used in a $400 or $500 computer, we are close to appalled to see it in use in a computer closer to the $1000 mark, or even $1400, which the review model we’re looking at manages.

As a laptop, you could probably get used to its washed out colours, and many of us did for years with older computers, finding the right angle and making sure you stayed there. But with a hinge that turns the laptop into a tablet? In that scenario, the screen Asus is using totally misses the mark, and is one reason why we can’t stomach a tablet this poorly put together.

Overall
Features
Value for money
Performance
Ease of Use
Design
Reader Rating2 Votes
Fair amount of hard drive space, with 1TB inside; Full-size keyboard with decent traction; Includes Gigabit Ethernet port; Can work as both a laptop, a tablet, and a media player;
Display has pretty poor viewing angles; Terribly low resolution screen: a 1366x768 resolution should not be on a 15 inch laptop anymore, Asus; Screen hinge isn’t tight enough, meaning the screen wobbles every time you touch it; Only one USB 3.0 port, and it’s not marked; Has a very plastic feeling; Heavy;
2.6