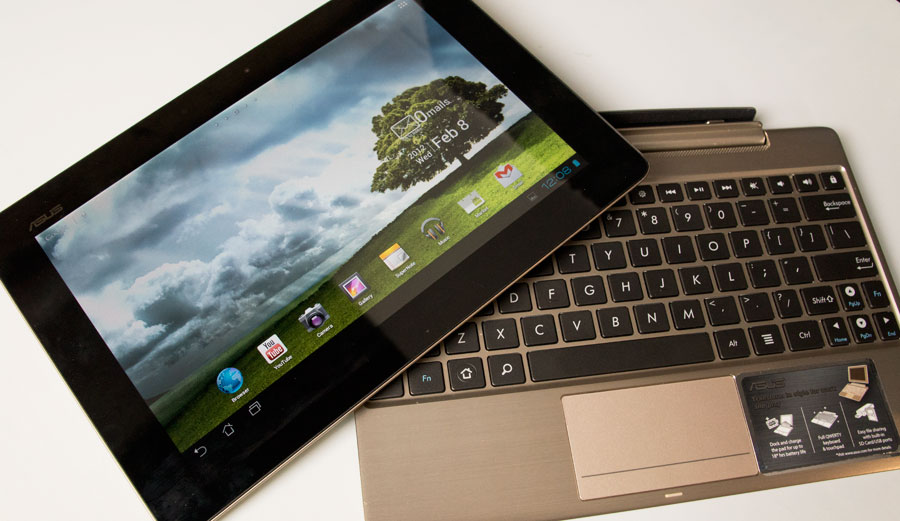 With the second iteration of its Transformer series, Taiwanese company Asus finds the middle ground between tablet and laptop in a way unmatched by other companies. Is this the perfect hybrid?

Encased in a rose gold-finish in spun aluminium, the Asus Transformer Prime is but a shadow of its former self. The brother to 2011’s Transformer TF101, the new model is thinner, lighter, more powerful, and features a stronger battery.

Designed in two sections, the Transformer Prime resembles a netbook, but one that can be broken into two components. At the hinge is a release switch that operates to separate the screen section from the keyboard.

Like the first version of the Transformer, the screen is a 10.1 inch multi-touchscreen with 1280 x 800 high definition resolution covered in Corning’s scratch-resistant Gorilla Glass.

The panel is a high quality IPS screen – like that in the iPad 2 – although Asus has improved it considerably by making it a “Super IPS+” screen, a brighter model with wide viewing angles that has been designed to work better in sunlight. Switching to this mode will reduce battery life, however.

Two cameras are included here in the screen: a rear 8 megapixel camera with 1080p Full HD video capture and LED flash, and a front-facing 1.2 megapixel camera – useful for video conferencing.

New to the machine is the Nvidia Tegra 3, a quad-core processor featuring more speed and enhanced graphics. Google’s latest version of Android – 4.0, Ice Cream Sandwich – is included here, making it more up to date than any other Android-equipped tablet currently available.

Connectivity is strong in the screen section, with Asus providing a micro HDMI port, 3.5mm headphone jack, and microSD slot – useful for expanding the memory beyond the 32 or 64GB provided.

Wireless is pretty straightforward, with 802.11b/g/n and Bluetooth 2.1 provided. There is no option for wired Ethernet, nor is there a built-in SIM card slot for 3G.

More connectivity options are provided with the included keyboard dock, an accessory that was an optional purchase in the previous Transformer product. Here in the Prime keyboard dock, you’ll find a island-key QWERTY keyboard, small trackpad mouse, SD card slot, USB port, and an extra battery capable of boosting the life of the Prime an extra six hours.