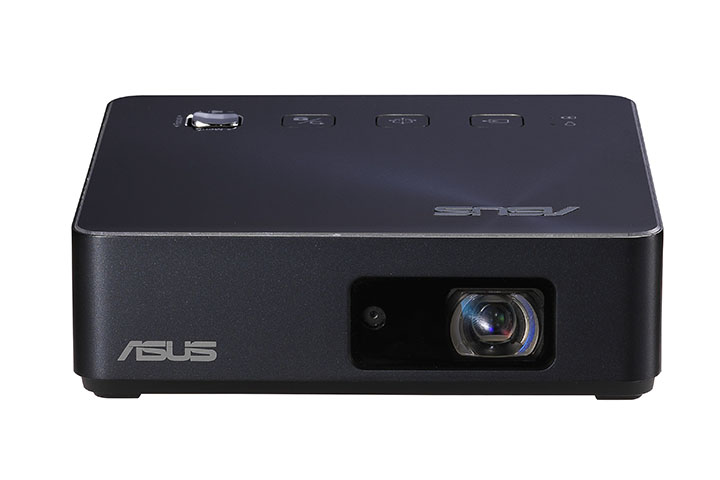 As part of my travel kit, I normally carry a Microsoft Wireless Display Adapter. That way I can kick back in the hotel room at the end of the day and sent Netflix from my computer to the hotel TV. Assuming I can reach the TV’s HDMI input.

What I’d really like to do is replace it with the ASUS ZenBeam S2 portable LED projector.

The ASUS ZenBeam S2 projector is a tiny little thing, but you can use it to project a large image on a convenient wall or (better yet) screen. ASUS says that it suits a screen size of 40 inches or 60 inches at the lower end (it depends which promo material you read) up to 120 inches. Yet the projector itself is only 120mm by 120mm by 35mm tall and weighs a hair under 500 grams. It comes with a neat padded zip bag, so it’s highly totable.

You can use the ASUS ZenBeam S2 as a power bank, too, if required.

The light engine is LED-based with a rated life of 30,000 hours. For all practical purposes, that’s forever. It uses DLP technology to form the image.

DLP uses (usually) one chip, called a Digital Micromirror Device. Instead of light being transmitted through pixels which can be opaque or transparent, as with an LCD projector, light is reflected off the chip’s surface. Each pixel is formed by a microscopic aluminium mirror which is hinged at one end. The signal causes the mirror to tilt up by 17 degrees redirecting the light.

(Does that seem almost unbelievable? Well, it does to me, too, and I’ve been writing about DLP for probably twenty years. The important this is that it works.)

The ASUS ZenBeam S2 projector uses a 0.3-inch DMD with 720p resolution. That’s 1,280 by 720 pixels. I haven’t done much with projectors of less than 1080p resolution for perhaps a decade, so I was interested to see what effect that would have on the picture quality. Texas Instruments does now have a 1080p DMD that’s nearly as small, but it would likely take a major redesign (and price boost) to fit it in to a ZenBeam.

The ASUS ZenBeam S2 is remarkably well-endowed with connections. It has a HDMI input with support for signals up to 1080p60. (It also works with such signals as 576i50 and 1080i50, even though the manual doesn’t mention them.)

It also has a USB Type-C port, which supports USB 3.1 and meets Gen 2 standards. That means DisplayPort compatibility. You can plug in some modern computers for display that way.

It has a USB Type-A socket, the sole purpose of which is to supply power for other devices. And there’s a 3.5mm audio output socket for headphones or external speakers.

The projector does actually have 2 watt stereo speakers built in.

And the projector supports dual band Wi-Fi, but only in a limited way. It won’t connect to your Wi-Fi network. Instead, it’s for direct connections via Miracast or Wi-Di, which should be available on most modern Android phones and Windows 10 computers.

On the bottom is a quarter inch screw mount, compatible with camera tripods. There’s also a low, two-position stand to raise the front of the projector. On the top are the control buttons. A small remote control is included.

Setting up the ASUS ZenBeam S2

I used my usual projection screen with the ASUS ZenBeam S2 projector and mounted it on a camera tripod for convenience. Don’t have a projection screen? Don’t have a suitable bit of white wall? In the picture settings, you can specify the colour of your wall and it re-castes the picture colours so that they look more accurate. Of course, a white projection surface is still best, but that illustrates the kind of flexibility ASUS has built into the ZenBeam S2.

I plugged in a HDMI cable from my Blu-ray player and inserted a disc with test patterns, then switched it on.

The projector has no zoom capability. You adjust picture size by moving the projector closer to or further away from the screen. The lens is a fairly short-throw design, so the projector sits quite close to the screen. For a 100-inch image it sits 2.5 metres away.

I fiddled with the powered focus a bit and got satisfactory results. But then I discovered that next to the lens on the ASUS ZenBeam S2 is a camera. It uses that to autofocus. I pressed the button for that on the remote and the projector threw up a crosshairs pattern, ran quickly through the focus range and settled on a sharp result in two or three seconds. That was easy.

Most of the usual picture settings are available in the menus. If you have to put the projector at an angle, then both horizontal and vertical keystone correction are available. With it you can adjust a trapezoidal image back into a proper rectangle.

But don’t do it. This projector is small enough for the correct placement. And it’s already relatively low in resolution. Keystone correction wastes pixels.

Finally, the projector can be set to flip the image to that it’s the right way around for ceiling mounting or rear projection. Seems like overkill, but it probably cost nothing so why not?

One of the nice things about a LED light source is that you don’t have to worry about how you place the ASUS ZenBeam S2. Projectors with lamps must be kept level or the lamp life will be shortened. With this projector, you can prop it up and project against the ceiling if you like.

Indeed, it’s so flexible it has a couple of decidedly non-traditional functions. When it’s running on battery, you can just use it as a flashlight. I wouldn’t suppose one would make it their prime flashlight, but in an emergency …

Speaking of which, you can also have it flash on an off to attract attention.

I found the multipurpose control button on the top to be tricky to use. When adjusting keystone, for example, you press the keystone button first, then use that multipurpose button to make the adjustment by pushing it forwards and backwards and side to side. Sometimes it didn’t seem to register, but then it did a second later. I later found several menu options had a similarly slow response. The trick is to do things one press at a time and wait to see that it has taken before proceeding.

I mostly used the unit with the HDMI connection, but I also checked out the WiDi/Miracast feature. It worked well with both my Android phone and my Surface Pro 2017. For some reason, when I used “Extended” mode with the computer, it defaulted to XGA – 1024 by 768 pixel – resolution for the ASUS projector. Changing it manually to its native 1,280 by 720 pixel resolution improved the picture quality considerably.

Okay, so what kind of picture can you expect from the ASUS ZenBeam S2 projector? Please excuse me for the next little while as I write about this projector using the same criteria I would for any home theatre projector.

First, one set of specifications suggests a screen size of between 60 and 120 inches. I’d strongly suggest keeping it towards the bottom end of that range. I used about 80 inches and the image was, well, less than adequately bright. At sixty inches? It was pretty good. You see, these days you can expect around 1,500 to 2,000 lumens from a low-cost home theatre projector. At 500 lumens, this one simply isn’t very bright.

The 720p resolution tended to make the picture fairly soft, too, at larger screen sizes. The smaller the size the sharper. That said, the upscaling of Australian SDTV – 576i – was respectable, as was the downscaling of 1080p content. There were no marked artefacts – the visual equivalent of distortion – and a pleasingly smooth picture was delivered. Again, keep that screen size small to get good strong colours.

There were some issues with Australian TV standards. First, all 50 hertz material was converted to 60 hertz for display. That produced a noticeable judder effect (you convert 50 frames to 60 frames by repeating every fifth frame – most displays simply run at 50 hertz to avoid that judder).

Australian standard definition content – that encoded at 576i50 – tended to be converted to progressive scan with a strong bias towards ‘weaving’ rather than ‘bobbing’. I won’t go into it here, but the former is best for stuff converted from film, while the latter is best for stuff shot on studio video cameras. In any case, the net effect was fairly impressive.

It was less so for content delivered at 1080i50. The interlace to progressive conversion seemed to be biased towards ‘bobbing’, resulting in some instability in fine detail on some films.

Black levels were pretty impressive, although they were in part a function of the relatively low output of the projector.

Now let’s consider the ASUS ZenBeam S2 not as a replacement home theatre projector, but as a portable projector used in less than ideal circumstances.

There its only real weakness is that it will have trouble competing with any ambient light. So it’s best to take steps to keep the projection area as dark as possible. That is especially the case if you’re running it on battery. I used a meter to measure one small section of light cast by the projector onto the screen. When running on mains power, it reported between 210 and 200 lux. When on battery, it was around 55 to 60 lux.

And all that said, the ASUS ZenBeam S2 projector was a great way to get a decent sized, highly watchable picture up in almost no time. It doesn’t have to be DVD/Blu-ray. I spent a while with it projecting Netflix, fed by a Chromecast Ultra. (HDMI devices communicate with each other, so the projector told the Chromecast that the maximum resolution it could handle was 1080p, and the Chromecast acted accordingly.) The Chromecast Ultra’s HDMI cable was plugged into the ZenBeam S2’s HDMI input. The ZenBeam provided power to the Ultra from its USB socket.

This was a nice little smart combo.

I’m kind of biased against any display with a resolution of less than 1080p, yet I fell in love with this little projector. The ASUS ZenBeam S2 is a smart and convenient way to get a decent sized picture up in almost no time. All you need is a source and flat surface.

ASUS’s site for the projector is here.

Features
Value for money
Performance
Ease of use
Design
Easy to use
Convenient size
A few hours of mains independence
I would like 1080p
Could improve 1080i50 deinterlacing and general 50 hertz handling
4.6