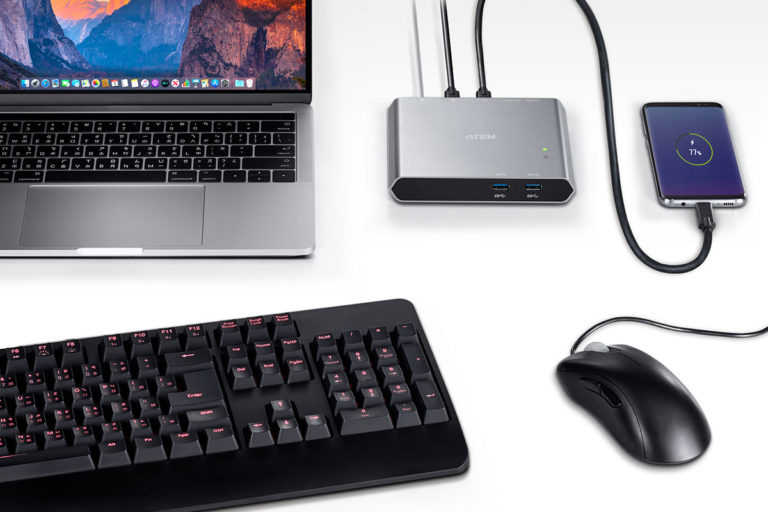 One of the reasons I purchased a Huawei P30 Pro phone was because I love its promiscuous docking abilities. With any of a wide range of USB Type-C docks, I can have a 1080p desktop up a large monitor and use a real keyboard. It isn’t locked into a Huawei-branded dock. So, would the ATEN 2-Port USB-C Dock Switch work nicely with it?

Let’s start by giving this device its full name: ATEN 2-Port USB-C Dock Switch with Power Pass-through. The formal model number is US3310. It’s a flat unit, solidly constructed of aluminium. On one side are two USB 3.23 Gen 1 Type-A ports. On the other side are three USB 3.2 Gen 1 Type-C ports, along with a HDMI output and a 2.5mm jack for the included one-button remote control.

One of the Type-C ports is for power input. No power supply is provided with the unit. It will support the full range of USB PD laptop charging supplies running at 5, 9, 15 or 20 volts.

The other two Type-C ports are for plugging in two devices that you want to share other resources with. For example, you may want to switch the dock between your phone and a computer, or between two phones or two computers. The resources that can be shared are any of the things plugged into the USB ports on the other wide, plus a monitor plugged into the HDMI port. Unlike some USB docks, there is no analogue audio output. Sound is fed to your HDMI display if it supports it.

One of the Type-C ports can pass through the full USB PD power to device. The other maxes out at 5 volts and two amps. So pick the right port for the right device.

If you’re not powering something hungry like a computer, you can get basic functionality from the unit with a USB power supply capable of delivering 3 amps at the standard 5 volts.

The ATEN 2-Port USB-C Dock Switch comes with two USB Type-C cables so it’s ready to run with your two devices, once you supply the power.

The one control on the unit is a push button on the end of a thin 1.8 metre cable. This plugs into the 2.5mm socket on the back of the ATEN 2-Port USB-C Dock Switch. Press the button and it switches from one of the USB Type-C devices to the other. Indicator lights on the top show which one is selected. Whichever device is currently selected has access to the various peripherals plugged into the unit.

At the moment I have a phone and a borrowed notebook computer plugged into the two USB Type-C ports. The computer is a little old so it does not support monitors over USB Type-C. So of course it showed nothing on the monitor when I switched the dock to use it. When I tapped the button to switch to my phone, its desktop display appeared on the monitor (at 1080p). It seems that the ATEN 2-Port USB-C Dock Switch “pretends” to each device that a monitor is connected, even when it’s switched to the other device. That means you can switch instantly between desktops on the two devices without them having the restart their display. Nice touch.

The ATEN 2-Port USB-C Dock Switch will support video at up to 4K at 30 hertz if your computer or phone does.

I plugged a 1TB external SSD into one of the USB Type-A ports and the dongle for a Logitech keyboard/touchpad into the other.

The keyboard/trackpad and SSD worked perfectly well with both my phone and the computer. I copied some large video files over to the computer and Windows indicated a transfer speed of 280MB/s or better.

The SSD disappeared from the list of drives on the computer when I switched over the phone. When I pressed the button again, it all went back the way it was. With the unit switched to the phone, the SSD was available for backup or whatever. I could access it using the File apps on have on the phone.

If your computer charges via USB Type-C, then you’ll already have a suitable power supply. Since I wasn’t powering a computer, I used a Belkin USB-Type C power supply, 5 volts at 3 amps. It provided plenty of power to charge the phone, run the SSD and keyboard dongle and deliver the HDMI video.

The ATEN 2-Port USB-C Dock Switch is nicely designed and convenient in use. In particular, the pseudo monitor it leaves connected to the device which it is switched away from keeps things very orderly, allowing fast switching.

ATEN’s website for this device is here. I notice that the website says that it supports DeX mode, which means it ought to support desktop display from the better Samsung phones as well.