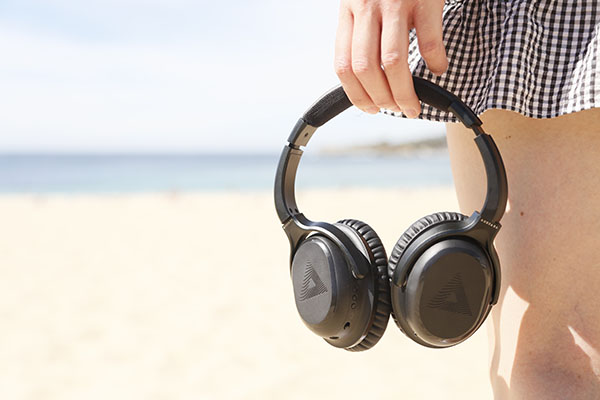 You’ve got to love Australian innovation. The Audeara A-01 Bluetooth headphones are the second Aussie model to cross my desk in the last few days.

The Audeara A-01 headphones have a couple of rather unusual features. One is a very long battery life. Very, very long. Another is that they’re “designed by doctors and engineers to deliver you perfect sound, always.” Say, what? Doctors? What do they have to do with anything?

Well, the Audeara A-01 headphones have a calibration feature. That is, the Audeara app can calibrate them for your individual hearing. The app is available for iPhone and Android of course.

I’ll return to that in considerable detail. But I’d say that the hearing test part is where the doctors come in.

Other more common, but still welcome features are active noise reduction, wired connection as an alternative to Bluetooth, and play/pause and volume buttons on an earcup, along with a switch to turn noise cancellation on or off. There’s a nice sturdy case. The cups swivel to a flat position, so the case is only 51mm thick, which makes it good for travelling.

A little cloth sack holds the bits and pieces, such as the charge cable and a small carabiner. (I guess that’s so you can hang the case up using its cloth loop. The headphones charge via Micro-B USB.

There are some nice touches: of course, you get a cable for wired mode. Niceness 1: it uses standard 3.5mm stereo sockets on both ends. It’s fairly short, but you can replace it with any of a million others if you need a longer cable. Niceness 2: it comes with a two prong adapter for airplanes. Sure, they only cost a few bucks, but it’s still a thoughtful inclusion. Niceness 3: it comes with a 3.5mm to 6.5mm adaptor so you can use it with a full-blown stereo system. Again, just a few bucks. Again, thoughtful.

So what about Bluetooth? For ages, I used an iPod Nano as my Bluetooth source. Some months ago I switched to an iPhone 8 and was rewarded with improved Bluetooth range. But the iPhone had to return to its maker, so I decided to combine my listening with the Android phone I carried with me all the time. That was the Google Pixel 2 XL. Apart from anything else, I like it because it supports aptX HD, and therefore regular aptX.

The Bluetooth connection page on the phone confirms that the headphones do use the aptX codec if it’s available on the phone. (Does it also support AAC for better quality with iOS? I’ve asked, but have no answer yet.)

Now, following the switch from iPhone to Pixel 2 XL, the next few sets of Bluetooth headphones I used seemed to be quite fussy about where the phone was for a reliable connection. Most didn’t like me having it in my front left jeans pocket. Most seemed happy having it in a front pocket of my jacket. So that’s what I settled on. So it took me a couple of days to realise that something was very different with the Audeara A-01 headphones. Very different indeed.

That is, these headphones didn’t care where I put the phone. The connection was utterly solid, regardless of pocket. When I realised this, I started stretching the relationship. If I put the phone in the middle of my house, would the connection remain intact to its furthest reaches? Why, yes it would.

How far could I go? I went out to my front yard, put the phone on a rock and set some music playing. I’d proceeded sixty paces before there was any hint of a dropout. I walked back towards to the phone a little and established that I could be facing any direction, and the connection was perfect to out beyond forty metres.

That’s about as good as a Beats Solo3 used with Apple gear (remember, it uses an Apple-designed chip for communications). And that’s as good as Bluetooth reliability gets.

The headphones were fairly comfortable for me to wear. The pads were soft, and the band pressure was a nice compromise between being gentle enough for comfort and firm enough so that they didn’t easily dislodge. What slightly reduced their comfort for me was that the earcup adjustment wasn’t quite enough for them to comfortably centre themselves on my ears. I had to tuck my ears up a little to get in them.

Now let’s be clear, that says as much about the size of my head as anything. Anyone who isn’t aware of having a particularly large noggin should be okay. But don’t worry, the Audeara A-01 headphones come with a “Legendary 60 day money back guarantee”. If they don’t fit, you can send them back.

The controls looked small and fiddly. But in practice, they were easily usable. They fell under my left thumb naturally, and I had no trouble determining which was which by touch.

I still haven’t come to calibration yet. That’s because I want to talk about their native sound. That is, how they worked when not calibrated.

In short, I loved them. The Audeara A-01 headphones produced sound which was bold and punchy and clean, with stacks of headroom. I guess the only criticism was that the bass level was a bit higher than neutral. But for all that, it was still tight and controlled and extended. It added a touch more fun to most music.

What particularly impressed me was the liveliness with drums. Some audio equipment compresses – accidentally – the dynamic range of the music. It simply can’t respond fully. There seemed to be no such problems with these headphones. Listening to the self-titled debut Santana album, the percussion bounced out, forwards and through the mix in the way it should. It didn’t obscure the melodic elements. It simply pieced through it. You know, kind of like in real life. Even without the doctor-assisted calibration capabilities, I’d be very satisfied with the sound quality of these headphones.

If you go to a professional to get your hearing checked, a big part of the process will involve you listening to test tones through a pair of headphones. Different frequencies are played and reduced in level until you can only barely hear them. They run through the whole audio spectrum for both ears and then they know how to treat any defects. As you get older, you lose high frequencies. You may have lost specific frequencies due to repetitive industrial noises. It’s different for all of use.

The Audeara A-01 headphones, combined with their app, do this for you. You can choose from three tests. “Standard” tests eight frequencies for each ear. “High Detail” bumps that up to 16. “Ultimate Precision” makes that 32 frequencies. The shortest takes around three minutes. The “Ultimate” one takes ten.

It plays each tone, and you turn it up and down until it’s barely audible, and that’s it. Afterwards, you tap a button and the app uploads the data to the headphones. The headphones hold that data and they process the sound on the fly. That’s why they’ll apply the calibration even when they’re wired.

After the upload, there’s one more step: you have to tell the headphones how much of the calibration you want to be applied. You can choose in 25% increments from 0% (no calibration) to 100%.

I like these headphones very much indeed. As I said, I’d be happy using them as my main Bluetooth headphones. But I would not use them calibrated. In my opinion, the notion of calibrating audio gear in this way is fundamentally misconceived.

I may be a minority in this. I’ve seen many very positive testimonials about their calibrated use. I may even be in a minority of one.

What I heard with these headphones was, well, a harsh, jagged mess of sound when calibrated. Tonal balance? Awful. Music was thin and discomforting. So what gives? Did I mess up the calibration?

No. As I said, I think the concept is in error.

Here’s the thing: hearing is more than just our ears. As we age, or as our ears suffer other damage, the hearing processes within our brains compensate. It’s similar to how the sight processes in your brain compensate for the colour of the light. You have an “auto white balance” processor in your brain. It’s imperfect, to be sure, but it’s why things don’t look orange to your eyes under incandescent light bulbs (while they do look orange to film cameras).

Likewise, our brains process the input from our ears to give the same subjective impression, even as our ears as instruments became less effective. Yes, your hearing will suffer. As you lose higher frequencies, you also lose the ability to determine direction as effectively. Your ability to pick out one conversation in a noisy room is hampered. As your insensitivity to the high frequencies increases and the threshold frequency lowers, it becomes harder even to understand what people are saying. But subjectively, in your mind, things still tend to sound the same.

So, if your headphones correct for those lost high frequencies, the sound is going to seem unbalanced, harsh with treble emphasis. Or for someone else with different defects in hearing, the emphasis might be in some middle or lower frequency where their ears are weaker.

The app says “The first time you experience personalised sound it may be very different from anything you’ve heard and this change can be overwhelming for some people.” That’s why it lets you choose the level.

Yes, it sounds different. But that’s because it makes the sound different to what it ought to sound like to us.

Now, if you were to wear these headphones all the time, with the full 100% personalisation in effect, then eventually your brain would reset the subjective EQ it’s applying, and music provided by these headphones would sound normal. Perhaps even better than normal. But when you took them off again, the rest of the world would sound abnormal until your brain equaliser adjusted itself again.

The period of adjustment? I don’t know. Perhaps an hour. Perhaps longer. That’s each time.

I like the sound of these headphones very much. Just not with the personalised adjustments.

Incidentally, the better your hearing, then less the adjustment, and then less objectionable you’ll find the personalised sound.

The Long Life of the Audeara A-01

I did say something about a long life. Audeara rates the battery life at a stunning 65 hours when you’re using them wired with noise cancellation switched on. With Bluetooth, Noise Cancellation and the Audeara processing on, that falls back to as still impressive 35 hours. Switch off noise cancellation, and that pushes it back out to 45 hours.

The Audeara A-01 Bluetooth headphones are fine headphones, well packaged and with thoughtful inclusions. Don’t let my reservations about the calibration function put you off. They are very nice without it, and you might find that you like it anyway.

The Audeara A-01 headphones are available here.