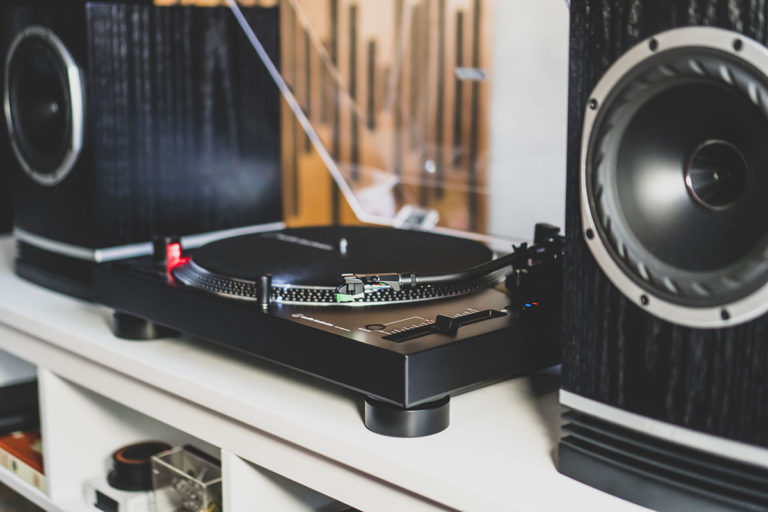 The Audio-Technica AT-LP120XBT-USB turntable has got to be one of the greatest value propositions on the market today. And it’s an interesting mixture of old-school analogue and shiny new digital technology.

What is the Audio-Technica AT-LP120XBT-USB turntable

As you can see from our “About” section, above, Audio-Technica has been in the vinyl reproduction game a long time. Today it sells a full range of turntables starting at just $229 and has models well onto the north side of a thousand dollars. The Audio-Technica AT-LP120XBT-USB turntable sits in the middle at around $750 – although you can score it for around $600 online. It uses a direct drive motor for trouble-free operation. The arm is fully manual, which means you have to raise the cue lever when it gets to the end. It is pre-fitted with an Audio-Technica AT-VM95E Dual Moving Magnet phono cartridge with elliptical stylus in a removable headshell. This has a rated output of 4mV. This was the same cartridge as that installed in the last turntable I reviewed.

Around the rim of the turntable platter are strobe markings. A pedestal at front left shines a red light on this so that you can see that the speed is accurate. (The Australian mains power alternates at a fairly stable 50 hertz. So a light switches on and off 50 times or 100 times per second, depending on its design. The relevant line of strobe markings appear to stand still if the turntable speed is right.) At the right is a slider control which allows you to alter the turntable speed. I’ve never really understood the purpose of this, but there it is.

There is also another pedestal with a white light that shines across the surface of the record towards the cartridge. Those various lights combined with the other red indicators make for a less than restrained styling.

A different kind of analogue

That slider is not the same as the main speed setting. There are two buttons. One is for 33 1/3rpm, the other is for 45rpm. Press both and the speed is 78rpm. That’s a rare feature! Note, if you’re going to hit the antique shops and grab a stack of shellac, remember you will need a different stylus or cartridge. They had much wider grooves and you’ll damage both the groove and your stylus if you use a modern cartridge. Fortunately, swapping cartridges is facilitated by the removable headshell.

Oh, even better! I see that the AT-VM95E cartridge can accept up to six different styluses. One of them (VMN95SP — $99.95) is suitable for 78rpm records. All but one of the other four are higher-level styluses than the installed one. You can replace its standard elliptical styus with a nude elliptical one ($199), a microlinear stylus ($279) or a Shibata stylus ($299). A replacement for the original stylus is $49.95.

You don’t need an amplifier with a phono pre-amplifier for the Audio-Technica AT-LP120XBT-USB turntable because it has a switchable built-in preamp with RIAA phono equalisation. This has a rated output of 240mV for the same modulation as the 4mV output spec of the cartridge. That suggests a gain of around 36dB. I found the output level more than adequate with this with several different amplifiers.

But there’s more. The Audio-Technica AT-LP120XBT-USB has an analogue to digital converter built in, along with a USB interface. Plug that into any computer and you can use any number of programs to record your discs to the computer. (Well, subject to copyright, upon which we offer no legal guidance.)

I plugged it into a Windows computer and checked to see what digital audio standards it supports. The useful ones are two channels, 16 bits and 44.1kHz or 48kHz sampling. Surprisingly, it also supports 32kHz, 22.05kHz, 16kHz and 11.025kHz sampling. It can record any of those in stereo or mono. Truth is, I’d like to see high resolution: 24 bits and 88.2kHz or better. That way if you want to do any processing to reduce noise, clicks and pops and such, there’s more data to work with. The final result is less likely to exhibit any processing artefacts.

Since the turntable digitises the music, why not transmit it via Bluetooth? Which is indeed what the Audio-Technica AT-LP120XBT-USB turntable can do. It supports the standard Bluetooth stereo music codec, plus the higher quality aptX codec, but not AAC.

Setting up the Audio-Technica AT-LP120XBT-USB turntable

The turntable had been reviewed by others before arriving to me, so some bits that would normally need to be assembled were already in place. Nonetheless, it was clear that putting them together would have been no problem. It was just a matter of following with reasonable care the Quick Start Guide. Setting the stylus pressure was easy: just screw the counterweight onto the arm to a point where the stylus balances at the level of the surface of a record, align the “0” calibration marking and rotate the counterweight back to the two gram recommended tracking weight. Then dial “2” into the antiskating dial. There, done.

Well, not quite. Using the ungrooved section of my old Shure test LP, it turned out that this was a bit too much antiskating. Bringing it back down to 1.5 on the dial gave the best counterforce. The counterweight calibration certainly seemed dead accurate. According to my Rega digital stylus pressure gauge, the tracking pressure was 2.04 grams.

While not the high-torque DJ turntable motor employed in some other Audio-Technica turntables, the direct drive motor spins up and slows down very quickly. Especially if you’re used to audiophile belt-drive turntables. In every respect this turntable was utterly trouble free. The cue lever dropped the stylus at a sensible rate. It was easily accessible and lifted the stylus properly. There was no cold-weather slowdown.

This turntable just worked. It was a genuine pleasure to use. This was clearly a no-fuss design.

With its own preamplifier, the turntable provides a good clean sound with a very solid rhythmic underpinning. Record surface noise was not hidden, but neither was it emphasised.

Stereo separation was good. “Merlin the Magician” on Side 2 of Rick Wakeman’s 1975 album The Myths and Legends of King Arthur and the Knights of the Round Table (it went Gold in Australia back in the day) has phasing tricks aplenty to send sound all over the room. Reproduced by this turntable, the effect was impressive.

My old Japanese pressing – that’s what we used for audiophile sources back in those days – of King Crimson’s Starless and Bible Black was very nice indeed, with plenty of impact on Bill Bruford’s drumming, and a good quiet floor under the Fripp’s fine and very fast picking in ”Fracture”.

With a really clean bit of vinyl the turntable shone. I listened to my CBS Half Speed Master record of Billy Joel’s 52nd Street, and the performance was magnificent.

I did prefer the sound with my Moon 110LP v2 phono preamp. It was more lively, with a sweeter top end. But that said, the turntable’s built in preamp was certainly competent. I should note that the Moon costs almost as much as this whole turntable!)

I paired a set of Bose noise-cancelling headphones to the turntable – I know, no aptX support, but I kind of like them anyway – and I have to say, they sounded very nice indeed. I was bit worried that vinyl surface noise fired directly into my ears by headphones might be intolerable. It wasn’t. The pleasing strains of Respighi’s The Fountains of Rome, probably recorded in 1973, on a disk I recently purchased for a buck from the recycling shop attached to the local dump, was really rather sweet, with only a few clicks. When I get around to cleaning it, it ought to sound pretty much perfect.

The USB output was trouble free, but a word of warning. Audio-Technica has set the analogue input level a bit too high. I recorded a segment of “The Safety Dance” by Men Without Hats from the 45rpm 12-inch single and sections of it were clipped by the ADC. You’d be hard put to hear it, and the fairly high transfer level probably increases overall enjoyment. Nonetheless, a purist like me would like to see perhaps 6dB more headroom.

Gadgetguy’s Take – the Audio-Technica AT-LP120XBT-USB is a no-fuss, high performance turntable with all manner of useful extras

Sure, you can purchase high-end turntables that may provide marginal improvements in performance. Audio-Technica itself sells at least one such. But the the Audio-Technica AT-LP120XBT-USB turntable is sweetly positioned as to pricing, performance, facilities and ease of use. See our coverage of other turntables.