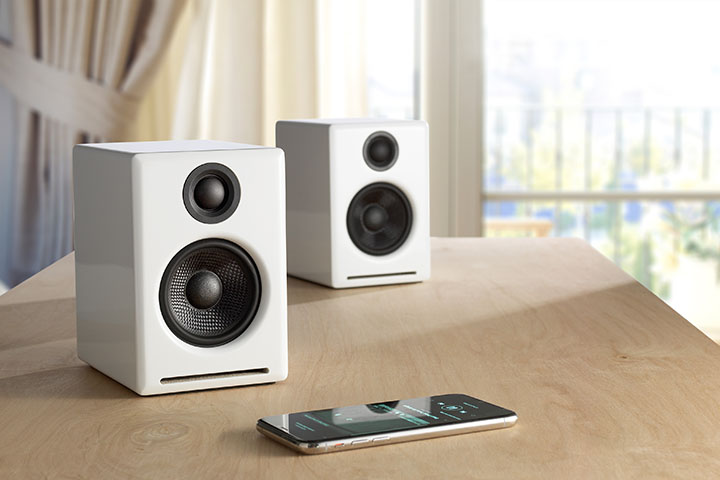 This isn’t the first time we’ve reviewed Audioengine wireless active speakers. Just over a year ago we reviewed the much bigger A5+ models and were so impressed we scored them at 4.7 out of 5.0. But how would the Audioengine A2+ speakers stack up. They are so very, very tiny.

Why the difference? That’s because all the electronics are packed into the left-hand speaker. It contains the two 30-watts continuous amplifiers and the power supply and the various connections, including Bluetooth. The right-hand speaker is passive. Included with the speakers is two-metre cable for driving the right-hand speaker from the amp in the left. Gold-plated binding posts on both speakers make for secure connections.

Each speaker is two-way unit, with a 19mm silk dome tweeter with neodymium magnet and a 70mm aramid fibre woofer. The cabinets are bass-reflex loaded, with a slot port at the bottom front of each. There are no speaker grilles, so the drivers are visible. I reckon they look good. Check out the photos for yourself.

Audioengine is one of those companies that makes its own speaker drivers, rather than simply using off-the-shelf parts. It says that this increased control allows its designs to work together more effectively.

Audioengine A2+ DAC and Bluetooth

On the back panel of the left-hand speaker are:

The other input is Bluetooth. The speakers support the regular SBC stereo audio codec, as well as aptX. That means higher quality audio from those phones which support it.

There is no input selector. If you send music to the Audioengine A2+ speakers via its analogue inputs and the Micro-B USB, it’s mixed and all comes out together. If you send music to the speakers via Bluetooth, it switches off the other inputs and only plays the Bluetooth music. When that stops – even though the Bluetooth connection remains active – the other inputs come back to life.

In their computer-speaker role, you’d typically plug a USB output of your computer into the Micro-B USB socket of the speakers. They operate in USB Audio Class 1.0 mode, which means that they’re compatible with just about all computers, including Windows 7 and Windows XP models.

Windows makes it clear they are locked to 16 bits and 48kHz. The purist in me objects a little to that, and it’s not because of a lack of support for high resolution.

The great majority of music people will listen to with these speakers is sampled at 44.1 kHz. When these speakers are being used, your computer will have to convert 44.1kHz to 48kHz sampling. That’s a conversion which does not have a mathematically neat solution, so some low-level noise and distortion is necessarily added.

But, to be clear, it’s extremely low in level, and the chances are few of us would be able to pick it, even in direct A-B comparisons. So it’s probably a reasonable design choice.

Listening to the Audioengine A2+ speakers

Um, what’s going on here? I’m playing The Offspring’s Americana at a rather high volume and the music is rocking. It’s reasonably clear. The drum kit has good punch. A little stressed? Perhaps. Drum kit a trifle anaemic? Well, yes. But those things are easily overlooked when one is listening to two tiny speakers. And when the output is peaking at – I’ve just measured it – at slightly over 100 decibels.

The Audioengine A2+ speakers got me thinking quite deeply about what defines quality audio. You see, with some music I was utterly delighted by the speakers, and other times rather less so.

These speakers clearly want to be high fidelity loudspeakers. With sensible music played at sensible levels, at their best the Audioengine A2+ are simply delightful. For example, I’ve switched to Laura Marling’s album Once I Was an Eagle, and her customary close-miked voice is clear and precise, yet restrained. Many speakers and headphones deliver this with some significant sibilance. There wasn’t a hint of that with these speakers. The acoustic percussion was clean and clearly audible, even when underlying the main musical elements.

There was an English sensibility to the sound: a little restrained, a little mellow. And that tempted me to wind up the volume. A temptation to which I, of course, succumbed. She continued to sound lovely.

At their best, the Audioengine A2+ speaker delivered a three-dimensional sound with astonishing precision in their imaging. A fine studio-speaker like intimacy and superb clarity, at surprisingly high levels.

That sense of true high-fidelity playback kept on popping up. Instances in “Burger Queen” by Placebo delivered tangible instrumentation at varying distances into the sound stage.

Coming back to The Offspring, the tonal balance was rather good, apart from the absence of a couple of octaves of bass at the bottom. That absence? I don’t know of any speakers of this size that could provide much better. But there is a solution for that, which I’ll get to.

It wasn’t as clear as the Laura Marling. That continued to be the case: fine recordings sounded good, busy, complicated recordings lost a bit of detail, especially if the volume level was pushed.

But, still, these speakers are perhaps one eighth of the volume of my regular computer speakers – they look positively diminutive on my isoACOUSTICS stands. I had to put an MDF platform atop the stands because the Audioengine A2+ speakers were too small to fit.

And, yes, you should use stands with your desktop speakers. Preferably ones that tilt up the front so that they point more directly towards your ears. Audioengine sells ($49) wedge-shaped ones which look like they’d do the trick.

Right now, I’m playing Wynton Marsalis’ Blood on the Fields, a live jazz performance. The sound quality is astonishing. “Computer speakers” have a bad name for audio quality. The Audioengine A2+ speakers utterly defy that.

Now, I shall confess that while I spent about ten days running these speakers, I listened to them in their native state for only about half that time. The other half I supported them with a subwoofer.

The sub is the one that belongs to my desktop system, the exceptionally fine Krix Seismix 1. Mine is a few years old, so its 200mm downwards-firing driver gets “only” 200 watts. The current model is up to 350 watts.

I just plugged the two RCA outputs of the Audioengine A2+ speakers into the two RCA inputs on the Krix, turned the low pass filter setting of the sub to around 70 hertz, and balanced the level by ear.

Good as the Audioengine A2+ speakers sounded alone, they sounded so much better with the sub. The missing lower octaves were filled in.

That said – and I note that Audioengine says that these are third generation speakers – when Audioengine is planning a fourth generation, one useful addition would be to have a “Sub” switch on the back. And what would that switch do? It would switch in a high-pass filter on the signal going to the main drivers at, say, 100 hertz, or perhaps even 120 hertz. That would relieve them of the responsibility of handling even mid-bass, let alone deep bass. And that would mean that they could cleanly go significantly louder with bass-heavy music since they wouldn’t be wasting their capacity on handling all that 70-ish hertz stuff.

That they do handle those deeper frequencies quite well on their own is a remarkable achievement. If you aren’t using a sub, they are impressive. But they could be much more impressive than they presently are when supported by a subwoofer.

You can see how much work they’re doing with the woofers visibly flinging themselves to and fro at times. There’s often a fair bit of air pumping through the bass reflex slots.

The shape of a bass reflex port has no effect on bass tuning as such. Square, slot, round, whatever, it’s all the same. The important thing is the area of the outlet and the length of the tube, and thus the contained volume of air. The shape and finish of the outlet can have other effects, such as creating noise as the air pumps in and out. Sometimes slot-style ports can produce “chuffing” sounds due to turbulence at the port mouth, but I did not experience any of that with these speakers.

I measured the bass response both up close and at a distance. Up close the bass output diminishes from around 150 hertz to be down by 6dB at 85 hertz. Back where my ears were, it maintained a better level out to 100 hertz and then fell away sharply. That was less bass than my listening impressions had suggested.

The fact is, the Audioengine A2+ wireless speakers are lovely sounding little things, true high fidelity loudspeakers, so long as they are used within their limits. And those limits are quite high. If it were me, I’d be looking to add a neat subwoofer. I’ll be seeing if I can get ahold of the companion Audioengine S8 subwoofer – $499 – to see if that will do the trick.

You can read more about the Audioengine A2+ speakers here.