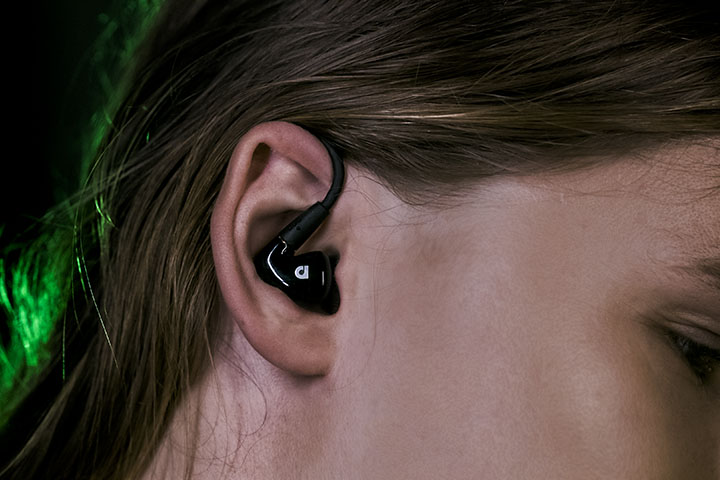 Do you prefer over, on or in? I’m talking about your wired headphones. Well after some quality time with fine over-ear headphones, I’m now spending time with the Audiofly AF-180 MK2 in-ear monitors.

In-ear monitors are what used to be called earphones. They have little buds wired to a 3.5mm plug. You can use them with your phone if your phone still has an analogue output.

But the Audiofly AF-180 MK2 IEMs are designed for better gear than that. Actually, they are at least in part designed for musicians to use on stage as “foldback” monitors. That’s the background of this Australian firm. But IEMs good for that purpose should be good for other listeners as well.

As it happens, we’ve reviewed some of Audiofly’s previous IEMs, including the MK1 version of the AF-180. But a fair bit has changed since then.

The Audiofly AF-180 MK2 IEMs consist of small buds with gently formed ear hooks to secure them. They’re attached to 1.2 metres of cable. There’s no inline remote-control pod, just Cordura fibre insulation around the twisted cable. The cable is attached via MMCX connectors, so it is removable and thus replaceable. Fatigued cables are the most common failure point in earphones, so that’s welcome. The whole thing, including cable and plug, weighs 16.9 grams according to my scales.

The Audiofly AF-180 MK2 IEMs are three-way units. All the drivers are a balanced armature design. Each bud contains a tweeter, a midrange and two bass drivers. Also somehow tucked in there is a passive three-way crossover.

Audiofly rates their frequency response at 15 to 25,000 hertz.

They come with a gold-plated 3.5mm to 6.35mm (quarter inch) adaptor plug, and a two-prong plug for airplane use. Also provided is a little cleaning brush with a tiny metal rod on the other end. That can be used to clean out any ear gunk that makes its way into the earphones.

And they come with a travel case. No, seriously, it’s a sturdy, hard plastic thing like a Pelican instrument case. It’s lined with some kind of velvety material to protect the earphones. It’s quite large for the job: 130mm by 100mm by 50mm.

The Audiofly AF-180 MK2 IEMs are provided with nine different sets of tips. Most of them are silicone: in a dome shape or “tri-flange”. But Comply Premium memory foam tips are included.

My wife complains about the ring on my phone. The ring tone is something I scavenged from the Internet, a recording of an old-fashioned phone ring. You know, from the days when they had a real, physical bell and hammer inside of them. It’s loud. And it’s long. The original file only repeated a couple of times. I’ve edited it to repeat more than a dozen times. I have it so because I don’t want to miss calls when I’m out in a noisy place and the phone is tucked away in a pocket.

Well, it turns out that someone called me twenty minutes ago. I completely missed it, even though the phone was sitting on my desk, right next to me. Yes, music was playing, but it was middle-of-the-road stuff playing at a modest level, since I was working on an article.

I was using the Comply tips in the larger size. They’re easy to insert: you just scrunch them down to a narrow fit, insert and wait ten seconds as they expand again to create a tight seal.

But they did tend to become loose on the earphones, so sometimes when I pulled them from my ears, the tip would remain or would fall out onto the floor. Indeed, they eventually became too much trouble to use so I switched over to silicone tips. These weren’t quite as good at isolation, but still worked quite well.

As I’m writing, I’m listening to the song “Cadence and Cascade” from King Crimson’s In the Wake of Poseidon. I don’t think I’ve ever heard Michael Giles’ drum kit presented by in ear monitors so tangibly, so realistically. Especially the kick drum, striking with a controlled, deep but thoroughly balanced thump as the cymbals swirl around over the top. Meanwhile Gordon Haskell’s vocals come through the mix so clearly that I could, if necessary conduct a forensic examination of them.

I’m using that track as an example, but it was the same with everything. “Hi-De-Ho” by Blood, Sweat and Tears, recorded in a naively unprocessed way back in the late 1960s had a wonderful dynamic liveliness, while all the little details were in full evidence. The bass on The Marshall Mathers LP was as powerful as it ought to be. The vocals on that can be a bit sibilant with some ear gear. None of that here; it was full and detailed but not excessively bright.

The Audiofly AF-180 MK2 IEMs present the music with an open accuracy that is everything for which high fidelity should strive. It isn’t the job of earphones to make the sound “better” in some way. Boosting the bass does make a lot of music more enjoyable. But it also means messing up some other music. Accuracy is where things ought to be.

And the Audiofly AF-180 MK2 IEMS are accurate. Even at high levels there was no discernible distortion. And I’d note that quite high levels are achievable. They are rated at a nominal impedance of 16 ohms and a sensitivity of 104dB (by which I assume they’re using the industry convention of the figure produced by 1mW of power). The little Apple Lightning to Analogue headphone adaptor will drive these earphones to 118 decibels, as would the last iPod Nano. Want more? The FiiO Q1 Mark 2 portable DAC and headphone amplifier – which is quite the bargain at $149 – would push the Audiofly AF-180 MK2 IEMs to more than 123 decibels.

Not that I recommend listening at those levels. Certainly not for any length of time. European rules aim to limit portable music player outputs to just 85dB, with an option to switch them (for a limited period) to 100dB.

The important thing here is that you can go loud if you want to. And because they’re so sensitive, if you’re listening to material with a low average modulation, you can raise it to a satisfying level.

I’m presently doing my listening on a Pioneer high resolution portable audio player, but I also gave the Audiofly AF-180 MK2 IEMs a workout on my usual DAC/headphone amplifier plus some other equipment. Both of those have a low output impedance so they can’t modify the earphone’s tonal characteristics.

But I also tried them out with a $5,000 headphone amplifier with ten ohms output impedance, and with a $1,300 network streamer with more than 90 ohms output impedance. Neither did noticable damage to the earphone’s frequency balance. So then I tried a home theatre receiver with an embarrassingly high output impedance of 480 ohms. And it did affect the sound somewhat, pulling back the bass a little while adding a little more “presence”. It was not an unpleasant listen with most music.

These earphones deserve to be used with good gear, but it’s nice to know that they can cope well with less good gear. They even sounded okay playing from the headphone output of my Microsoft Surface Pro 2017. (Well, I thought they did until I played some pipe organ with really deep bass. It was too quiet. I plugged in a high-quality portable headphone amplifier/DAC and the bass was back.)

The Audiofly AF-180 MK2 in-ear monitors are easily my favourite IEMs, the best I’ve ever heard. They’re so good, I’m even happy to substitute them from time to time for my favourite over ear headphones.

You can find out more about them, and purchase them, here.