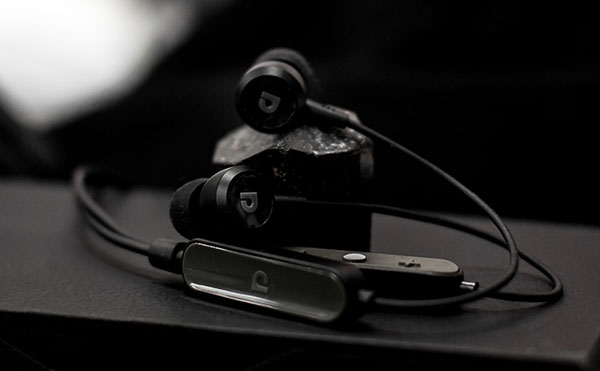 The Audiofly AF33W earphones are less than one-third of the price of the AF100W (which we reviewed here). They are conventional in design. A short cable connects the two earpieces.

Near each end of the cable, there’s a 40mm long pod. The one on the right has three press buttons, the Micro-B USB socket for charging and a pinhole for the microphone. The buttons are the usual multifunction ones. In normal use, the middle one is play/pause while the other two are volume controls.

I guess the other pod just holds more battery. (There would be some in the control pod as well.) The two of them, combined with a cable clamp that allows you to adjust it for the best length, made for comfortable, balanced wear.

Also making things comfortable was the low weight. The whole Audiofly AF33W, earbuds, cable and pods combined, weighed just 11.9 grams. The buds themselves are rather small, their round bodies only 13.5mm in diameter. Neither do they stick out very much. The bodies are less than 11mm long. That makes them quite inconspicuous, especially with the black finish of the review models. Also available are white ones with rose gold colour trim.

They are rated IPX4, which means that they can cope with splashes of water. So they ought to be okay out in the rain and survive a little sweat. Audiofly includes three different sizes of silicone tips.

Inside each earbud is a “custom voiced” 9mm driver with a neodymium magnet. “Voicing” is something you generally only hear about in connection with real high fidelity brands. It is the final adjustment by ear of prototype headphones and loudspeakers so that they sound just right. Production models carry that tuning.

Audiofly specifies the frequency range as 20 to 20,000 Hertz. It seems that the Audiofly AF33W earphones only support the standard Bluetooth SBC codec.

The charge time is one hour, and battery life is … Um. The specifications on Audiofly’s website say 3.5 hours. The box says 5 hours. As always, it really depends on how you use it. If you play the Audiofly AF33W at full power, it’s going to run out more quickly.

For me? I’d split the difference. I typically got between three and four hours. The first time I charged them up took a bit more than an hour.

I approached this review with a little trepidation. The Audiofly people seem to be nice people, and I hate writing negative reviews about products from nice people. But what, I thought, can you expect from $59.99 Bluetooth earphones?

I needn’t have worried. The sound was quite listenable. Surprisingly good, in fact. The one obvious weakness was that there was audible white noise produced by the earphones. It was at a low level and you don’t notice it at all when the music’s playing, but it is there when the music stops.

As for the music itself, it was almost fascinating. I hate earphones which are excessively bright. The Audiofly AF33W earphones weren’t. The first music I put on was Deep Purple’s classic Live in Japan album. That’s potentially rather screechy, but the earphones kept things under control. The cymbals had plenty of upper frequencies, but also an unusually full body of a kind normally heard only with more expensive headphones. The earphones delivered the bass guitar in full, with a strong grinding rhythm that matched the music perfectly, while the drum kit had full impact. As I turned up the volume things could become a bit confused. That was only a problem at excessively loud levels. Normal listening levels kept things in order.

For podcasts, the voices were clear and coherent and easy to understand. Handsfree calls worked well too.

The earphones don’t power down automatically if no music is playing. Initially, I could imagine them draining while doing nothing much,  so I took to powering them down manually. But then reconnecting to the iPhone 8 on powering up again could take up to ten seconds. That seemed unusually slow.

When I had a look at the specifications, I saw that these earphones have a standby time of 200 hours. I concluded that it was silly to switch them off. And as time went on, it was clear that doing this had little impact on their run time.

The control pod was well designed. I found it easy to identify the buttons by touch. Their springs required just the right amount of pressure. They were easy enough to press, without being susceptible to being accidentally pressed when brushed with the fingers.

There are voice prompts to tell you what’s happening with regard to the connection. As the batteries ran down, there was an insistently recurring “battery low” announcement. I couldn’t ignore it because it muted the music each time for a couple of seconds. The earphones announced that four or five times. Then, in less than two minutes, the earphones went dead.

The Bluetooth connection was adequate. It began dropping out as I walked away from the phone well before I’d gone ten metres. You should keep your phone around your person when using these.

So, it turns out that it is possible to have decent Bluetooth sound at a relatively modest price. The Audiofly AF33W certainly proves that. Just keep them close.