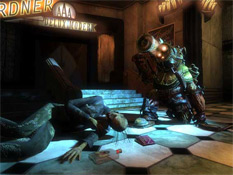 BioShock is now available in Australia  for the Xbox 360 Games for Windows. Developed by 2K Boston and 2K Australia, BioShock is a “genetically enhanced” first person shooter that lets players do things never before possible in the genre.

Gamers enter the game as a castaway in Rapture, an underwater utopia torn apart by civil war. Caught between powerful forces and hunted down by genetically modified “splicers” and deadly security systems, players have to come to grips with a deadly, mysterious world filled with powerful technology and fascinating characters. No encounter ever plays out the same and no two gamers will play BioShock the same way.

In the decaying art deco underwater city of Rapture, players can turn everything they encounter into a weapon, biologically modify their body with plasmids, hack devices and security systems, upgrade weapons, craft new ammo variants, and experiment with different battle techniques.

Make meaningful and mature decisions that culminate in the ultimate question: Do you exploit the innocent survivors of Rapture to save yourself, or risk it all to become their savior?

BioShock is rated MA 15+ in Australia.