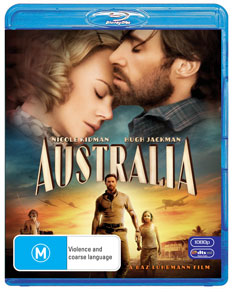 The film that hardly needs an introduction in this country, Australia’s main female star, Nicole Kidman, claims to have signed on the dotted line without even reading the script. Received well over here but not so enthusiastically over, you know, there, the self-proclaimed epic adventure is now available on a 50GB Blu-ray disc.

But with the potential to pack it full of bonus content, there’s only one ‘featurette’, a paltry two deleted scenes and a bunch of ‘behind the scenes’ short pieces on such subjects as sound, visual effects and costume design. Which, with a large-scale production like this, with over two-and-a-half-million feet of film shot, very much suggests that there are a few ‘special’ or ‘limited’ edition versions of the movie set for milking in our future, too.

Worse, good ol’ Baz Luhrmann is extremely patronising when talking about post-production – why on earth should anyone know, or care, what it is, anyhow? – and when he gets to extemporise on “the film is being born, and starting to have its own life”, it’s time to skip the chapter. But steer clear, if you do, of his life partner’s segment on costume design, which turns out to be scary and egg-sucking in equal parts, although her use of ‘similarily’ is worth hearing for a chuckle.

The DVD gets only the two deleted scenes, which seems a bit stingy, even by movie house standards. Wait for the inevitable Christmas bonza version.

Featurette – Australia: The People, The History, The Location

Deleted scenes – What About the Drover? and Angry Staff Serve Dinner