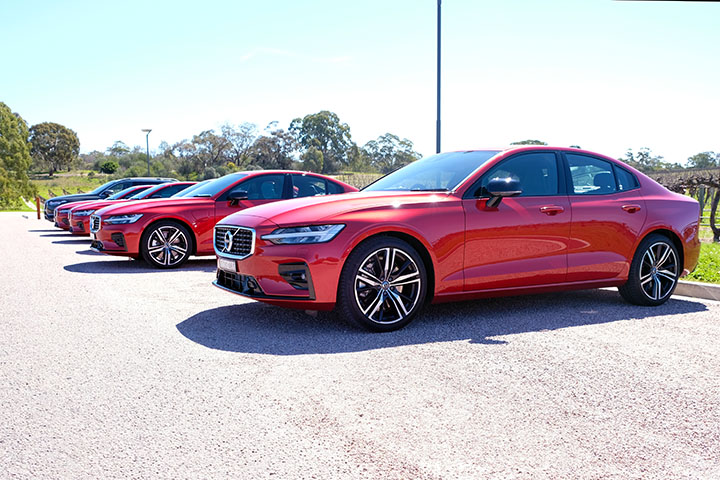 Barossa Valley – 11 September 2019 – Volvo Australia has released its latest sedan, the Volvo S60, with a lush drive through the South Australian countryside for a number of we writers and media types. As is the way of things, we got to experience the higher-level models, although these will be supplemented by some more affordable ones.

Now, before we get behind the wheel, I should outline the model structure. At the relative entry level is the Volvo S60 T5 Momentum, which is priced at $54,990. This comes with a turbocharged 2.0-litre four-cylinder motor which produces 187kW at 5,500rpm and 350Nm of torque from 1,500 to 4,800rpm. That runs through an eight-speed Geartonic automatic transmission to an all-wheel-drive drivetrain. Volvo specifies the acceleration at 6.4 seconds to 100km/h and the top speed at 240km/h.

The T5 Momentum has a host of standard features, such as:

And then there’s Volvo’s sportier R-Design range. These come in two levels too. The Volvo S60 T5 R-Design ($64,990) uses essentially the same engine. But it’s tuned up by Volvo’s Polestar performance arm. This bumps up power to 192kHW at 5,700rpm and torque to 400Nm, albeit over a more restricted 2,500 to 4,000rpm range. That pushes the car to 100km/h a tenth of a second faster. It comes with mostly the same features as the T5 Inscription, but a whole lot of sportier R-Design trim highlights, including racing-car-look pedals. It also has gear shift paddles for those who want better control over their car’s transmission.

Remember, though: eight gears. That’s a whole lot of paddling.

Finally, at the top of the heap, is the Volvo S60 T8 R-Design ($85,990). This one isn’t just trim and frippery: the motor is very different. It still has the two-litre four-cylinder petrol motor (there is no diesel option in the latest S60 range; it’s on the way out). But this Polestar optimised engine is both turbocharged and supercharged, pushing its power to 246kW at 6,000rpm and its torque to 430Nm at 2,200 to 5,400rpm. Plus, the car is a plug-in hybrid. The electric motor provides a further 65kW (at 7,000rpm) and 240Nm of torque. As is the way of electric motors, that torque is available all the way from zero to 3,000rpm.

That makes for an enormous boost in acceleration. The 0-100km/h time falls from 6.3 seconds to just 4.3 seconds.

Finally, for every Volvo S60 there’s a Volvo v60. They’re just the station wagon versions. Each costs $2,000 more than the similarly-equipped sedan.

The bunch of us writers and presenters had the opportunity to drive from Adelaide Airport through the winding hills of the wonderfully picturesque Barossa Valley to a lunch venue, and then back – the quick way down the motorway – to the airport. I drove about half the way to lunch in a Volvo S60 T5 R-Design, and about half of the way back to the airport in a Volvo S60 T8 R-Design.

The T5 has fine balance and more than ample performance. We were on regular roads, subject to the usual road rules, so I had to be somewhat restrained. Nonetheless on some of the windy stuff quite thrilling legal speeds could be achieved, while the car remained steady, stable, secure. And it really did push me in the back. At one point I overtook someone and, being used to a much slower car, I was almost stunned by how quickly I was had passed by the other vehicle.

The ride was firm but not uncomfortable. There was very little body roll.

Within the car there was a feeling of refinement. The side windows don’t tilt in as much as many other cars, giving a real sense of space. The centre console is high. The car waistline is high. The seat is low. I felt quite cocooned, yet there was still plenty of elbow room.

The 9-inch centre-console display is clear and, unlike some car interfaces, has a touch panel about as effective as an iPad. Swipes to one side disclosed the various driver assist controls. The other way showed entertainment options. I plugged in my Android phone and played music from TIDAL via the car’s Android Auto capabilities. The other person was driving at that point, of course. But the car nonetheless insisted that we stop and engage the handbrake while I connected my phone for the first time. Yes, there is a bit of safety-first insistence in the design.

When in navigation mode, that display – by default – only gives a medium scale view of the route, although you can manipulate it, including zooming in, as though it were Google Maps. But a finer, closer view is provided on the dash between the electronic speedometer and tachometer dials.

The car looks for speed limit signs and puts them on the dash display, as well as placing a red tick-mark on the speedo dial. It worked well with standard signs, but it often failed to spot electronic speed limit signs.

The head-up display is easily visible but not distracting. I didn’t even notice it for a while. Most of the time it shows the car’s speed and the speed limit. If the former exceeds the latter, the speed limit indicator starts slowly pulsing. When navigation is on and an upcoming turn is approaching, that also pops up in the display.

Of course, there’s a reversing camera image on the centre console display when R is engaged. But this one synthesises the image. It uses the camera to show the surroundings, but turns it into a view from above. And it imposes an image of the car on that so you can see where you are. I found it more intuitive than the usual system.

At one point in the hills I started poking at the controls on the steering wheel, seeking to control the sound system volume. Both cars were specced up with a 15-speaker Bowers and Wilkins system. It sounded magnificent but added $4,500 to the cost. The controls are all marked with incomprehensible international symbols. So rather than turning up the sound, I managed to turn on the “Lane Assist” part of pilot assist. That looks for lines on the road to either side of the car and tries hard to make sure the car stays fairly well-centred between them.

And that started the struggle. First, with the system trying to override my steering. To be fair, it wasn’t trying very hard, but it was disconcerting to feel a nudge in the steering wheel as the car tried to exercise its own judgement. The second struggle was with trying to work out how to switch it off. That was entirely due to my lack of familiarity with the controls. You can turn these things on and off in several different ways, not just on the steering wheel controls. But the quickest, clearest way was a left swipe on the centre console display and a tap of the button (this one has text, so you don’t have to guess at the meaning of icons.)

In the real world, one will very quickly learn what everything does and use it surely.

Back on the motorway returning to town, the adaptive cruise control proved to be a beauty. It controlled the car’s speed quite precisely and slowed it when it approached a slower vehicle in front and then maintained a fixed, safe distance. When I changed lane, it accelerated back up to the set cruise speed.

All these cars are available now. You can check them out further at Volvo’s website here. They certainly look cool.