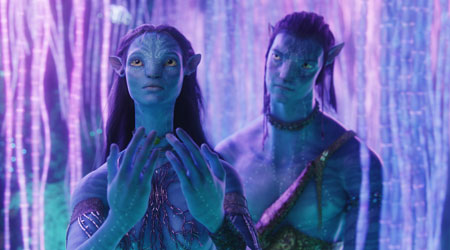 Ambitious, visionary and finally technically possible, Avatar hardly needs further introduction. Even your grandmother will have heard of this extraordinary film with its masterful direction, interwoven brilliance of animated and live-action actors and its (welcome) moralising tale of the dangers of blind hegemonistic ignorance and the imperative for indigenous respect. The story of the Na’vi clan is almost overwhelmingly beautiful, sad and ultimately uplifting, but the same most certainly cannot be said of this first Blu-ray release of the movie. We say ‘first’, because apparently an ultimate edition is planned, as well as the 3D version, and that smacks of pure greed, I’m sorry to say.

Pick up the Blu-ray version of the film right now and you’ll be greeted with a nice, video backdrop to the menu and three solitary, woefully inadequate buttons labeled ‘Play’, ‘Setup’ and ‘Search’; that last giving you the option to select a scene or view bookmarks. Whoopy Doo. It’s too late to tell you but I say wait for the proper, non-exploitative version around November.