Avoiding grief with the Cloud 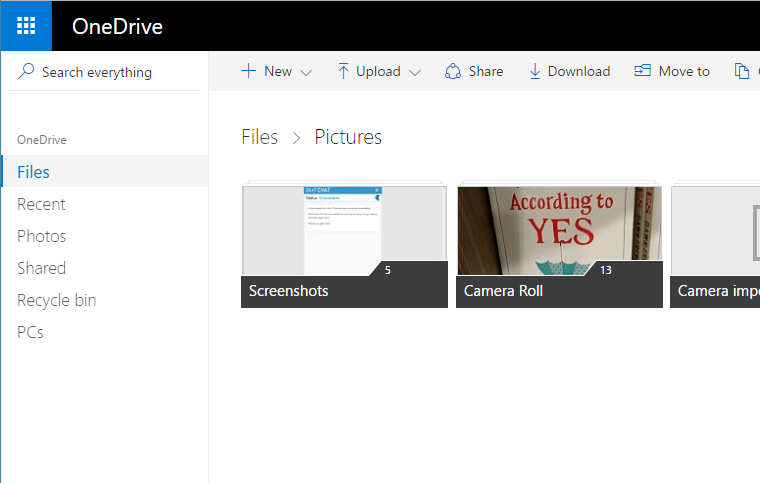 I mentioned in the previous article (on transferring from Android to iOS) that somehow the iPhone 7 started filling up with photos which I’d thought that I’d previously deleted from OneDrive. It was worse. Those photos not only started loading into the iPhone folder, they gradually started reappearing in the OneDrive folder on my Windows computer along with several other devices.

What was going on?

The problem wasn’t iOS or iCloud. Nor was it OneDrive alone doing weird stuff. It was an interaction between the two. Somewhere during the setup I must have told the iPhone to sync photos with iCloud (or perhaps it’s a default that I missed). Either way, I had photos syncing to two separate cloud services at the same time.

Now, there were already 300+ photos in iCloud. They consisted of a small number of screen shots from my iPad Mini (which I use pretty much exclusively for testing apps), plus a few hundred photos from my various Android phones; ones I’ve owned, ones I’ve tested.

So how did those Android photos get into Apple’s iCloud? Well, I’d take a photo on an Android phone. OneDrive would upload it to the OneDrive patch of the cloud. Next time I switched on the iPad Mini, usually to take a few screenshots of some app in operation, OneDrive would sync the photos with the Mini. That would mean uploading the two or three screenshots, and downloading a dozen photos from OneDrive. Which I typically didn’t notice because I wasn’t using the iPad Mini to look at photos, or indeed to do much at all.

A few weeks ago I decided the Camera Roll in OneDrive was unmanageably large, so I moved almost all the photos to other folders, but occasionally, unexpectedly, one or two of them would reappear. Now I know why.

It was because I’d switch on the iPad Mini occasionally and it would start syncing itself with iCloud photos, downloading some which OneDrive would identify and upload to the OneDrive cloud.

That’s also what happened with the iPhone, except in a big way. Instead of having it on for just a few minutes, as I normally used the Mini, it was on for ages because I was trying to set it up.

So all these photos which had started life on an Android phone as far back as 2014 had first been uploaded to the OneDrive cloud around the time I took them. Then back down to the iPad Mini over time whenever I happened to switch it on. Then up to the Apple iCloud from the iPad Mini. And then down to the shiny new iPhone.

But because I had OneDrive sync switched on in the phone, it started uploading them again to the OneDrive cloud, and one drive then synced them again back to my Android phone, my Mac Mini, my desktop and portable Windows computers, my Android tablet.

Meanwhile, my bit of the Internet slowed to a crawl while all those megabytes of photos were being pushed hither and thither.

And the moral of the story? Don’t auto-sync anything with more than one cloud service at a time! Who knows what kind of feedback loop you might inadvertently create, especially as I noticed that at some point, some of the Android photos had been renamed by iOS (with the insertion of “iOS” into the filename), which would lead to duplicates? Could there be triplicates. Quadruplicates? When might it ever stop?

As for me, I’ll be sticking with OneDrive because I’ve got a terabyte of space there and Apple will want its iPhone 7 back in a few weeks. So I’ve got photo sync switched on in OneDrive, and off in iCloud. If I were an Apple only person, though, I’d probably opt for iCloud.