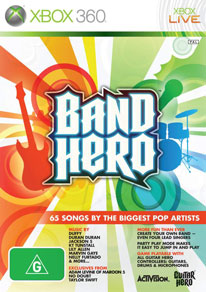 Music participation games, where you hold a replica instrument and try to press the various buttons in time with an onscreen sequence, have proven to be massively popular over the past few years, creating a gaming category of their very own and generating all sorts of fanboy fervor on a new release – witness the incredible and largely inexplicable furore from excitable non-musos when EA put out a Beatles version of their game, Rock Band. So here’s another one. It’s from Activision, yet again, and is a ‘re-skin’ of their immensely popular Guitar Hero 5 game. As the name of the new game suggests, if you buy the full shebang, you get a pretend guitar, drum set and microphone, so everyone in the family or on your friends list can have a go.

This time around, however, the songs are more pop oriented and the entire game is geared towards more family-friendly fun. Given the nature of these kinds of games, however, you don’t spend too much time staring at the visuals, such as they are, but rather focus on the particular ‘track’ relevant to your instrument so you can make sure you hit all the right notes.

The instruments themselves are pretty impressive for fakes – a substantial and really rather great guitar replica and a solid-feeling drum set make you feel your significant cash purchase is justified, and since everything is wireless (apart from the mike), if it’s the first time you’ve invested in the full gear, you’ll feel like you got your money’s worth. We had a bit of trouble getting the drums to respond properly and they seem to often fall out of proceedings entirely, warranting some frenzied fiddling mid-way through a song to try and get back into the action, but on the whole, the instruments responded well.

Most of these games are really only as good as their track list, and the one in Band Hero is a pretty unsatisfactory mix that appears to favour the singer’s role and, if you’re a drummer, may leave you twirling your sticks and attempting to remain looking cool while the rest of your buddies whale away in time with the onscreen prompts. This is doubly frustrating if, like me, you were trying to use the game to get your younger kids interested in music and playing together, because frustrations loom large very quickly and interest wanes as a result.

I realise that this will be as welcome as a fart in a sleeping bag, but I’ve always thought that there’s something pointless and a little pathetic about watching grown adults pushing buttons on pretend, plastic instruments to sing along to songs, particularly if taken too seriously. Sure, it’s an evolution of air guitar and karaoke but that itself is a bit tragic, and higher difficulty levels certainly present a huge challenge regarding dexterity, but at least with karaoke the instrument, your voice, is real. So music games never really do it for me.

That’s just my opinion, of course, and clearly millions of videogamers don’t share it, which is perfectly understandable and good. And when Band Hero going well – which in our case involved having to pay for and download some additional, more recognizable, songs for the littlies – the game can be great for little kids, to teach them the principles of rhythm and melody, and huge fun watching the younger members of the family crashing away on the drums, steadfastly picking on the guitar and banging out vocals on the mike. It’s a serious outlay to get going but if it’s your first time and you’re looking for a lightweight music game that will involve your whole family, Band Hero is a decent pick up.

The price listed above, $89.95, is for the game software only, for the Xbox 360, PlayStation 3 and Wii platforms. The Nintendo DS version includes a peripheral attachment for the drum kit, and sells for $89.95 RRP.

If you want to buy the game and all the instruments, the full Band Hero packs with guitar, drum set and microphone, then it’s $329.95 for the Xbox 360, PlayStation 3 and Wii platforms, and $299.95 for PlayStation 2.