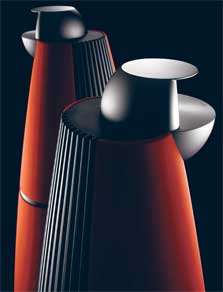 I approached the review of the Bang & Olufsen BeoLab 9 stereo speakers with some trepidation. The last time I reviewed something from this illustrious Danish company was rather a disappointment, failing to provide some of the most basic features needed for decent performance.

But that was several years ago. What we have here, instead, in the BeoLab 9 is a pair of stereo loudspeakers. Not just any loudspeakers, but powered ones.

Sometimes B&O is accused of offering more style that substance. We shall get to the latter shortly, but there is certainly plenty of style here. The speakers I received were finished in black cloth, but dark grey, blue and red are also available. Atop their conical structure is a unique aluminium tweeter assembly, in which a 19mm tweeter points directly upwards, and has its sound deflected into a 180 degree horizontal arc, eliminating the need for a ‘sweet spot’ for the best stereo imaging.

Underneath that, concealed behind the cloth, is a 125mm midrange driver, while below that is a mighty 250mm bass driver. Each driver has its own amplifier: the tweeter and the midrange each get a 100 watt conventional analog amplifier, while the bass driver is powered by a 400 watt ‘ICEpower’ Class D module. This amplifier is a B&O development and has been licensed to manufacturers all over the world, since it provides prodigious qualities of power from a small, cool-running module.

Within a concealed cavity at the back are the connections. This was somewhat of surprise: there were no RCA sockets for connecting the signal. Instead there were old-fashioned DIN-style sockets, of the kind I used to see on some European equipment back in the early 1970s, except with eight rather than five pins. There were two of these connections per speaker, providing a lot of flexibility. You can run cables directly to each speaker from your B&O source device, or you can daisy-chain them if that makes wiring easier in your environment.

If you want to use these speakers with a non-B&O system, you will need to purchase optional adaptor cables ($18.60 each for five metres).

So, are these speakers a triumph of style over substance? No way. Stylish they may be, but they also deliver the goods.

I used the B&O BeoSound 4 CD/tuner to drive these speakers, and the results were excellent. They had, as claimed, an extraordinarily wide ‘sweet spot’ for stereo imaging. The stereo images were deep, rounded and precise.
The tonal balance was excellent. The speakers were not of the quiet, retiring kind. Their sound was quite up-front, a touch pushy — aggressive, even, when called for. And they certainly went extremely loud. I accidentally advanced the volume control rather too far during a brief pause in the music and got a genuine fright when it resumed.
The bass balance was magnificent, too. In fact, the frequency response of the system was very wide, with little in the way of significant fluctuation between 28 and 20,000 hertz.

Incidentally, each speaker uses, according to my power meter, just 0.1 watts in standby. The BeoSound 4 switched the speakers to this mode whenever it was switched off.

If you are buying these speakers, you can use those adaptor cables to make them work with your regular system. However B&O seems to prefer that you go the whole B&O hog. They are probably right with that.