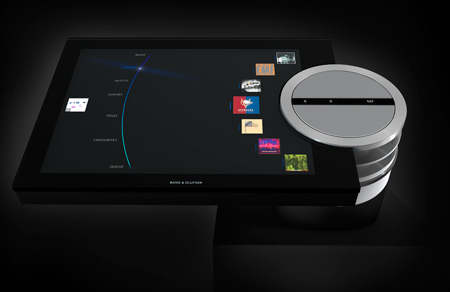 Bang & Olufsen is not your regular consumer electronics company. Positioned comfortably in the upper echelons of hardware providers with imaginative industrial design that at once distinguishes it from the competition and defines an instantly-recognisable identity for its wealthy owners, B&O dares to be different.

Very often, the company’s innovative ideas are emulated and the imitations may even become better known than the original, so it’s rare to find the Danish company playing catch-up. However, with the BeoSound 5, there’s an element of that, because this strikingly designed system is intended for digital music lovers.

Not your teenager iPod fanatic, mind, but a more serious, cashed-up music lover who has lately come around to the realisation that, like it or not, music in digital form is here to stay, and that there are many conveniences in that development. B&O seeks to bring these folk into the 21st century but aim, in doing so, to create an entertainment system that could elegantly grace the smartest of homes.

In essence, the BeoSound 5 is an MP3 jukebox, but that rather tawdry description doesn’t do it justice. Crafted by Anders Hermansen, designer with Bang & Olufsen since 1990, the system comes in two parts, but it’s the controller element that immediately attracts the eye.

A 26.4 cm high resolution LCD screen with a cylinder attached to one side, it’s unexpected but unusually glossy and appealing; something that wouldn’t look out of place on the Enterprise’s bridge in the new Star Trek movie.

The controller can be placed on a side table, mounted flat against the wall with the included bracket or given pride of place on a dedicated aluminium pedestal, for maximum eye-candy effect.

As with all B&O products, there’s always the option to have professional installers visit your home and do the installation for you and, with the BeoSound 5, this may be more attractive because the second part of the setup – the heart of the system – is the BeoMaster 5, an unattractive black box housing a 500GB hard drive and plenty of AV connections that can, thankfully, be secreted away out of view while still connected via Ethernet and AV cables to your PC and TV.

The BeoSound system deals with all the popular digital music formats including MP3, AAC, WAV and WMA files and up to 28,000 lossless audio tracks will fit on the BeoMaster’s hard drive. If that’s not enough, you can squeeze on a whole lot more compressed tracks – 80,000, in fact, at 196kbps. Although capable of outputting photos and video to a connected TV, this is not a feature B&O is promoting with the system, hence the current lack of DVI/HDMI compatibility. And despite its lovely screen, the BeoSound 5 controller doesn’t display either, so won’t double as digital photo frame when not in use.

Album covers are displayed on the 1024 x 766 LCD screen in vivid colour and selected by turning the heavy, high-grade aluminium navigation wheel and attached handle. Moving the handle swings a selector beam up and down in the macro selection menus (such as ‘albums’ or ‘artists’) then you spin the wheel to scroll within that selection and use the ‘back’ and ‘forward’ buttons on the wheel itself to dive deeper into your chosen listing and select a specific track.

Once it’s playing, push the handle all the way down and MOTS (see below) kicks in, instantly. The intent, says B&O, is to give the user the feeling that they’re actually physically delving into the equipment with their fingers, for a more experiential, tactile experience, and it should be easily operated with one hand.

Now before the Apple brigade get all fired up about copycat controls, it’s worth nothing right away that B&O, and not Apple, devised the first-ever ‘wheel control’ interface with the BeoMaster 6000 from 1974 and followed that up with the first product to use the wheel to ‘scroll’ through menus and options in the BeoCom 6000 cordless telephone in 1998.

Naturally, in the interests of professional investigation, we tested the ‘single handed’ theory with a decent glass of pinot noir, carried aloft as we manipulated the swish wheel mechanisms, then for reasons of due diligence did the same with a 15-year malt whisky a refreshing G&T and lastly, should the hoi polloi ever save up enough cash to grace a B&O showroom with their presence, a good old stubbie. In each case, the controls were easily manipulated – and, given the ubiquity of the iPod, certainly familiar – but it’s not immediately obvious, or easy to recall, what does what and really no more tactile than anything else we’ve encountered.

But what’s MOTS? Well, MOTS is an acronym for ‘More of the Same’ (sounds better in Danish, we’re assured) and describes an automatic playlist-creation function. The product of extensive research B&O conducted with AI specialists OFAI – the Austrian Research Institute for Artificial Intelligence – MOTS, Bang & Olufsen claims, is more sophisticated than Apple’s ‘Genius’ software, analysing the tracks you’ve selected on the basis of musical qualities such as “rhythm, syncopation, key tonality and vocal harmonies”, rather than the conventional tags of artist name or genre. So there. It then immediately compiles a listing of ‘more of the same’ music for you to enjoy.

Start with AC/DC, for instance, and the BeoSound 5 doesn’t serve up other ‘rock’ tracks, such as those from Crosby Stills and Nash, but musically similar tracks that cross genres and genders. The link between tracks isn’t always obvious, but as one segues into another you’re aware that the playlist isn’t totally random either. In short, MOTS facilitates a kind of musical ‘six degrees of separation’ that makes for an intriguing journey through your collection.

If that kind of trip doesn’t suit your mood, however, the The BeoSound 5 allows you to choose playlists according to more conventional album, genre and artist tags.

The BeoSound 5 frees you from having to create a whole heap of separate playlists, as you’re compelled to do with other MP3 devices. Oh, and it looks amazing.

To get the most from this setup, however, and avoid the abrasiveness of compressed music played back at high volume – because you will want to turn this rig way up – you need ensure you’re transferring only lossless tracks to maintain the highest quality. Do this and reproduction is superb.

Unfortunately, you have to use the B&O software via a PC to download music files to the BeoMaster 5 unit, not a USB drive in one of the USB ports, otherwise the MOTS system doesn’t work and, at time of testing, B&O has no wireless Ethernet solution for the connection to your PC, so trailing wires it is.

The LCD really should be a touchscreen, if B&O is aiming for true ease of use and, given the deluge of finger-activated gear from every bandwagon-hopping consumer electronics company these days, that’s a seriously missed opportunity.

Lastly, you need to add a pair of speakers to the BeoSound 5 system if you want to actually hear what it produces. Proprietary connectors at the rear of the BeoMaster 5 indicate Bang & Olufsen active models as a best-fit and, although adaptors for non-B&O powered speakers and amplifiers are available, the typical B&O customer will choose to keep it all in the family.

Overall
Features
Value for money
Performance
Ease of Use
Reader Rating0 Votes
Attractive design, particularly if professionally mounted; Excellent build quality; Near-instantaneous playlist creation
Flywheel control not as intuitive as it could be; No option to expand storage capacity; Not designed to pair easily with non-B&O speakers
3.2