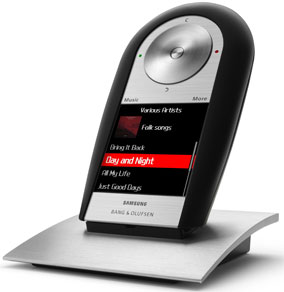 The latest entrant into the growing fashion-mobile ring, the Serenata combines the mobile phone prowess of global 2nd-runner Samsung with the sleek design sensibilities of home audio specialists Bang & Olufsen.

Easily one of the most innovative and unique designs for a mobile in years, the Serenata has been made for the music purist with a taste for luxury brands. But does the Serenata fall into the same trap as so many high fashion, high-price phones have in the recent past?

The Serenata is the fashion-accessory attempt to marry a music player with a phone, from one company with a strong reputation for high-quality music systems and another for mobiles. Unlike many other mobiles with music players, the Serenata does not marry the two well. There is no number pad, requiring an iPod-style click wheel or occasional touchscreen input. As a phone, it is light on features and at times barely useable. Text input, even with predictive text, is agonisingly slow. Entering numbers is not much better.

As a music player, the device is workable. The wheel and menu interface will be familiar to any iPod user, and the inclusion of album covers with music is easy to use and easy on the eyes. Syncing music and album art using Windows Media Player is a breeze. 4GB of storage space is good for a small pile of CDs, but nothing exceptional compared to other music phones.

A nifty slide-out speaker is a great addition – while speakers may be commonplace in mobiles, this speaker makes the device a true music-lovers delight. Great sound, great bass. The lack of a 3.5 mm headphone jack is a glaring omission from a phone which is dedicated to music, but B&O’s included headphones are both attractive and functional.

Like similar ‘designer’ mobiles (think the Porsche Design P’9521, or LG Prada), the Serenata has a very niche target market which throws any normal definition of “value” out the window. Value to some means exclusivity. Or rarity. Or fashionability. The Serenata has all these things. But if value means useability, or even usefulness, or features, the Serenata fails miserably. The eye-wateringly expensive asking price for this device will be just fine for those who have money to burn, but the reality is it will never suffice as an everyday mobile phone, for any user. It’s sexy and chic, but will only ever be a secondary mobile to whip out to impress onlookers (which it will).

As a stand alone music player without the mobile phone, the Serenata actually stands up in its own right. Design-wise, the slide-up speaker is sexy and gives impressive sound quality – head and shoulders above the tinny speakers found in your average mobile phone. The included headphones are also top-notch, in both form and function. But the Serenata will still not replace your iPod – 4GB of storage is a bit on the slim side and puts this device more in the league of the iPod Nano rather than the iPod Classic or Touch. The beautiful and slick metallic click-wheel will be pleasantly familiar to iPod users, as will the simple menu system.

It’s rating as a music player alone would be 3 stars.

As a music player, the Serenata is simple to use with an effective in-built speaker and standard storage space. As a phone, it is bad. The click wheel has been tried before – and failed before – by bigwigs like Nokia who abandoned the horrific input method.

Basically, it is unusable as a day-to-day mobile when it comes to simple tasks like text messaging. But if you have a spare two grand to splash around on an unusual MP3 player that nobody else has, this is… unique.