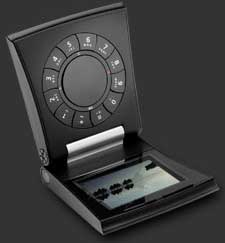 We all know someone who complains that they can never find a phone that just lets them make calls. It’s all megapixel camera this and 3G connectivity that. Fortunately, B&O has just released a phone that offers a clean, elegant and basic design. Unfortunately, it’s extremely expensive and doesn’t always put ergonomics ahead of style.

Designed by B&O and engineered by Samsung, the Serene has a reassuring pedigree. But the design is just this side of radical. Using the popular clamshell form-factor, the phone has the display in the lower half and the unusual circular keypad in the upper.

The hinge is also motorised – exert a suggestion of closing pressure and the phone folds itself up with a quiet whirr. The exterior is almost completely featureless, wrapped in silky, matt black plastic that has a slight rubber feel.

The stainless steel hinge does carry B&O and Samsung branding, but only B&O is visible when the phone is opened.

It’s not possible to upload new ringtones, but there are 12 to choose from that all work on a variation of a tick-tock theme. One set is called Wood, the other Bronze, and so on. There’s a vibration alert as well.

When a call is missed or an SMS received, there’s no external display on the phone of course, but after a short while a tiny green light on the edge opposite the hinge starts blinking to let you know the phone wants to tell you something.

B&O ships the Serene with a docking station that looks like a stainless steel ornament. When the phone is docked, it “flips” so the display is at the top. The phone will open automatically when it is docked an a call comes through.

Using the Serene is a mix of frustration and delight. It’s lovely to hold, open or closed, and the crisp, clear display is refreshingly minimalist. There’s an iPod-style scroll wheel in the centre of the circular keypad with four-way button functionality, which is elegant and effective.

The circular number keys are mostly okay to use, except it’s easy to confuse the 6 and the 9, especially since the 9 is more or less where the 6 would be on a regular keypad.

B&O believes the inverse layout, with the keypad on top and the screen below, is more ergonomically sensible, but it’s difficult to agree with this since the side of the thumb does cover a small part of the display when reaching to dial 7 or 8. However if you prefer your keypad in a more conventional position, you can hold the phone ‘upside down’ so that the keypad is in the bottom position, and the screen will automatically rotate to suit the new orientation.

Apart from ergonomic issues, the functionality of the phone is basic but excellent. Voice quality is very good, although some receivers complained the Serene’s microphone distorted the voice somewhat. It’s also not effective in moderate windy conditions.

The Serene is a beautiful object that looks its best in an executive or designer setting, docked atop a sophisticated hall table, perhaps. It feels beautiful in the hand and the minimalist functionality is refreshing in the current market. The included camera, mounted in the hinge and at right-angle to the display, is almost impossible to use, however.

The Serene’s biggest problem is simply its price. This is an incredibly expensive bit of kit, but the phone really is a cut above even Nokia’s “design” series. So for the right user, the price premium could be worth it.

Overall
Features
Value for money
Performance
Ease of Use
Reader Rating0 Votes
Fabulous to hold and touch. Looks like an elegant ornament when docked. Stands out from the generic crowd.
Can be difficult to use. For users who only want basic functions. Extremely expensive.
2.6