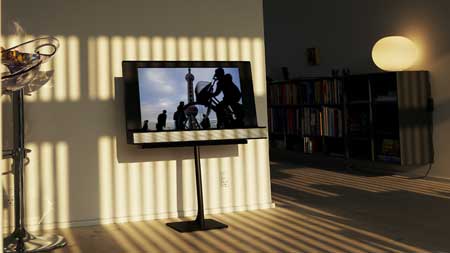 The sound produced by flat screen TVs is just as flat as the screen, according to Bang & Olufsen, which has developed the Vision 8 series of LCD TVs to address the problems.

Available in 26 and 32 inch diagonals, for $4,380 and $6,090 respectively, these integrate front speakers specially tuned to reproduce human speech. “We’ve moved the sound forward and up, like a proper stage with a real orchestra pit”, says designer David Lewis. “This ensured the sound is truly in synch with the image, rather than a distraction from it.”

An additional down-facing bass loudspeaker provides the extra impact needed for reproducing film soundtracks and music videos and, picture-wise, the TVs offer HDMI connectivity, a response rate of 6 milliseconds and a contrast ratio of 1200:1.

Bang & Olufsen maintains that the benefits of high definition video are realised only on screens larger than 40 inches, so the BeoVision 8 models integrate only a standard definition tuner. With a screen resolution of 1366 x 768 pixels and compatibility with 720p video signals, however, the sets are easily mated to an outboard HD source such as a digital TV set-top box or a Blu-ray player.