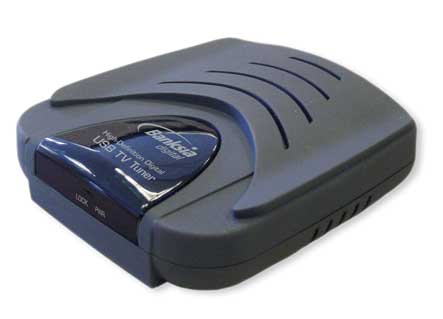 The Banksia High-Definition Digital USB Tuner certainly delivered on its promise of allowing you to enjoy digital television in four easy steps. Installation was a simple matter of plugging the unit into a spare USB slot, installing the software, plugging in the antenna (supplied) and running the television software.

As with any digital set-top box, the first thing you need to do is to scan for available channels. Provided the antenna is aligned correctly and you are located in a good signal area, this process is automatic with the tuner finding all of the channels the first time around. Once the channels have been tuned you can use the computer keyboard, mouse or supplied remote control to select channels and control the unit.

The supplied television software effectively turns your computer into a PVR (personal video recorder) that can record, time-shift and play back television recordings as well as DVDs and other digital video files. The software is highly intuitive so that once you familiarise yourself with the icons and controls, using it is easier than programming your VCR.

The Banksia Tuner supports SD (standard definition), HD (high definition), digital radio and teletext as well as an EPG (electronic program guide) and multi-channel preview. Television can be displayed in a window or full screen.

The picture quality has no noticeable glitches, even when the computer is being used for other tasks (such as work) at the same time. Capturing television for time-shift or recording did not seem to consume excessive computing resources although Banksia recommends at least a 2GHz processor for HD viewing.

Since television is captured as standard MPEG 2 video streams with MPEG Layer 2 audio, recorded files can be easily edited using most video editing packages and burnt to DVD using appropriate software and a DVD writer. The software also allows you to record HD video to your hard disk, but given the enormous amount of storage required and the present lack of Blu-Ray or HD-DVD writers that can store that amount of data, this function is of limited value for now.

Watching HD television on a 15 inch notebook screen does seem a little overkill. While you can see a difference between HD and SD on the small screen, you probably would not obtain the full benefit unless you have a particularly large computer monitor or some way of sending the HD pictures to a widescreen television.

The main problem I ran into is that the unit is quite fussy on signal quality. Even when the indicators show full signal strength and good RF quality, we experienced drop outs when using the supplied antenna in a poor inner city reception area.

Overall my experience with the unit was quite positive. It was easy to install and use, provided great pictures and sound. As long as you’re in a good digital TV reception area, glitch-free recording is also on the menu.