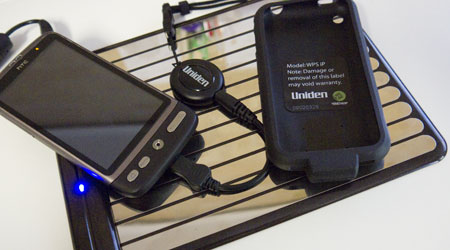 Smart shoppers looking for expensive goods for not a whole lot of cash would be wise to check out Officeworks stores this week.

A quick search on the website yields the Uniden Wireless Power Pad Deluxe Kit for $20, a huge cut in the original $180 price the pack fetched. This shift in price makes it a great gadget gift before it sells out.

Induction charging hasn’t been the huge success everyone thought it would be, partly because mobile manufacturers haven’t gotten behind it and started integrating the technology into the back of various phones. Uniden isn’t the only company making one, with both Duracell and Powermat releasing induction chargers.

To recharge with these devices, you’ll need to plug in an either a small docking connector accessory or attach a skin if you’re using the iPhone. Users of the iPhone should note that not only are most of the skins designed for iPhone 3G/3GS devices, but the skin also plugs into the docking connector and blocks it, making syncing impossible unless removed.

iPhone users will be forced to charge using Uniden’s skin, something we wish was supplied in the form of a small plug tip like it is for microUSB.

After trying this out over the weekend, we’re wishing the iPhone dock connector was available in a plug tip similar to what microUSB has instead of the obtrusive case that we’re never going to use. Still, if you know someone who wants a no-fuss way of charging their phone, this could be the ticket.