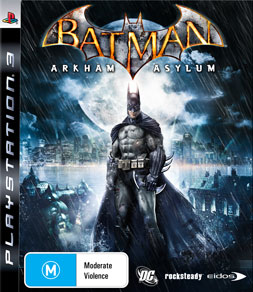 Hammering another very singular nail in the coffin of the truism that all games based on superhero properties are rubbish, Eidos has been fortunate enough to team up with super-talented developer Rocksteady Studios and the result, Batman Arkham Asylum, is a nearly perfect Batman game. Not strictly a ‘superhero’, on account of being a regular, albeit strong and highly-trained, guy rather than some unfortunate bitten by an insect or dropped in a vat of some suspect liquid, Batman is nevertheless very super, and there’s little doubt that a lot of his popularity stems precisely from his brave, ‘stand-up guy’ persona. Fortunately, he has some superb gadgets.

From your very first encounter with the Batman, it’s clear that a multitude of design choices have been carefully made to maintain the fiction and keep the player immersed in the game world. They’re present from the first footsteps you take in the game, playing out in the most literal sense: a lack of onscreen ‘furniture’ or displays for a minimum of distractions; the realistic banter between the guards and their charge; the way that game information is displayed up on screen, with a fluttering of bats which then disperses as unobtrusively as it came; and even the manner in which the game pauses when you hit the ‘Start’ button, freezing the image you see into ‘bas relief’ and thereby preserving continuity perfectly, keeping you in the game even when you’ve stopped for a moment.

Another element of the game that’s with you from the outset is the extraordinary stream of quips issuing from the Joker. They’re extraordinary because they’re accurate, because they actually reflect what’s happening – to the extent that if you linger too long at the start in walking through an entrance, the Joker immediately notices: “You’re not coming with us, Batman?” in his trademark mocking tones. The commentary streams throughout your time with the game, keeping you engaged and significantly enhancing the overall experience.

Arkham Asylum plays out as a fairly free-roaming action adventure in ‘third person’, so you always see the Batman on your TV. This ensures you get to see all the good stuff – just as Batman is described as the world’s greatest detective, so the player is required to engage in as much sneaking around as he is combat. Your new best friend, then, is a kind of thermal vision mode, effected with a single tap of a controller button, which gives you an x-ray view of your surroundings, providing useful information as well as alerting you to the most immediate threats.

You’ll spend a lot of your game time in this mode, which sadly means you’ll sometimes miss some great visuals, but you’ll probably be having too much fun to notice. Fittingly, combat is nearly always conducted at very close range, with a hugely satisfying array of martial arts-style moves at your disposal and a dizzying number of animations to accompany your prowess. We swear that, even by the end of the game, we were witnessing moves that looked totally new.

Every environment is very dynamic, painting a convincing picture of the Aslyum and its surroundings – detail like tiny blinking lights on electronic door locks, gyrating fans, humming generators, a spinning wheel on an upturned wheelchair. You’re always totally immersed in the action – action that we won’t describe here and ruin your fun – but the combination of great writing, superb characterisation, extraordinary graphics and those really fun gadgets all conspire to deliver an absorbing and incredibly entertaining game play experience – not just for a ‘hero’ game but for any kind of game.

The only small downer is a lack of imagination when it comes to ‘boss battles’ – the climactic fights with the big, bad guys at the end of each episode – which mostly follow an identical theme and attempt to overwhelm with numbers rather than tactics and therefore detract from the overall challenge. But, as we said, you’ll be having far too much fun the rest of the time to notice, and away from the main story-driven game, there are all sorts of minor distractions, such as the excellent ‘Riddler trophies’, that task you with exploring the game world to its fullest in their pursuit, and a separate ‘challenge’ game mode, allowing players to brush up on their stealth and combat skills, and post the results live to online leaderboards for bragging rights.

With a game this strongly focused on delivering an engaging narrative, longevity is always a challenge. While there seems like little point playing through the entire game a second time, you’ll almost certainly have some ‘mopping up’ of Riddler trophies to do, and even some revisiting of early areas to see if your shiny, new gadgets can help you reach areas that were tantalisingly visible but out of reach before. And there’s an enticing ‘downloadable content’ option in the menu, so perhaps Rocksteady is preparing some new content, although our guess would be that it comes in the form of challenges rather than new areas or ‘missions’.

Still, Batman Arkham Asylum is not only a huge credit to the UK developer Rocksteady but testament to the fact that it is entirely possible to produce a brilliant superhero game. We’re willing to bet Warner is breathing a massive sigh of relief, too. Hopefully, they haven’t broken the mould and other media conglomerates will trust Rocksteady with some other projects – Disney, with their recent acquisition of Marvel, should be taking note, as they need all the help they can get with new gaming versions of Iron Man, Hulk and X-Men.