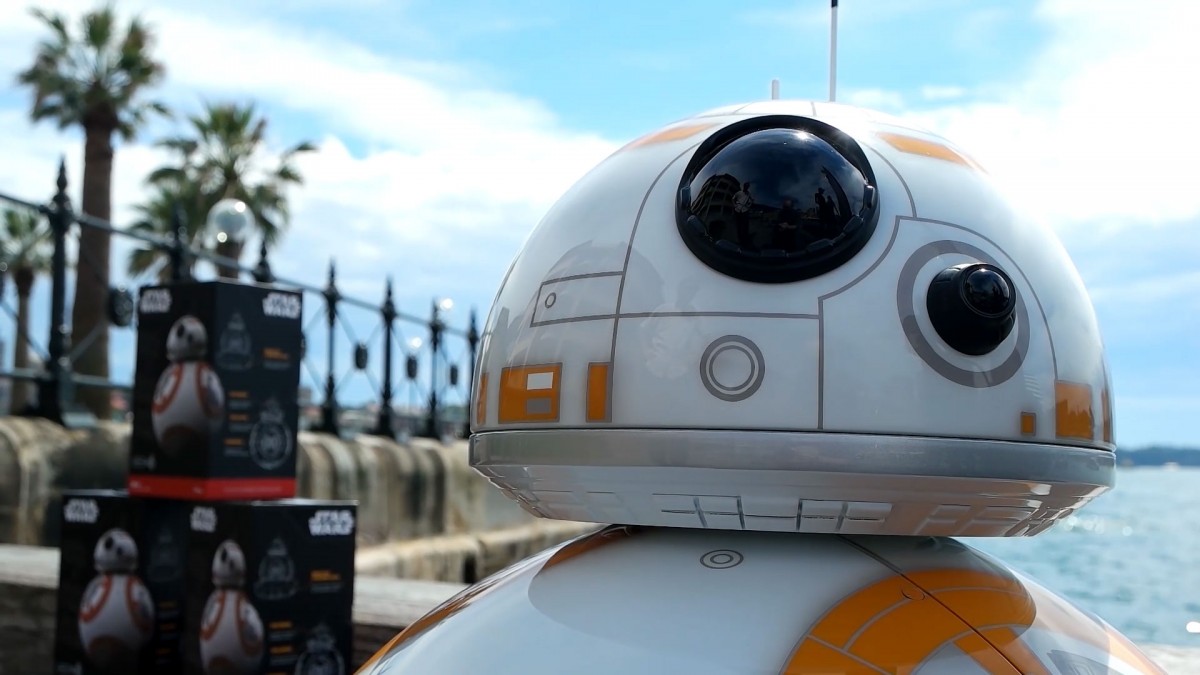 BB-8 lands ahead of Star Wars The Force Awakens

You don’t have to look far to know there’s a new Star Wars movie on the way, and ahead of its release, the official astrodroid in the film has rolled into Sydney.

Star Wars fever is about to quite literally grip the world (if it hasn’t already), and ahead of what promises to be the biggest movie release of the year next week, Disney has decided to show off one of the stars of the film.

He’s not a well known actor yet, and technically, he’s not even a “he”.

It is BB-8, the astrodroid set to basically be the new lovable robot from the film, taking point from R2D2 from the original movies, and finding a way to roll into hearts and minds.

And when we say “roll”, that is precisely what he’ll do.

The version that has been flown in for the special fan celebration this week in Sydney is a life-size version of the spherical BB-8 movie robot, which in the film isn’t so much a robot, but a highly developed prop controlled by effects wizards on the set.

Apply a few sound effects and some expert manoeuvering and you basically have a character with its own life and personality, which is what BB-8 is.

In the real world, though, BB-8 is a prop, which is why Disney and Lucasfilm have tapped spherical robot maker Sphero to build a real life version, which we met in Sydney.

This robot isn’t super different from his pint-sized sibling that was launched earlier in the year in September, though it is bigger. Much bigger.

It speaks the same language of bleeps and bloops and blurbs, and twitches its head as it looks around the place, absorbing the Sydney harbour and, for the most part, staring at the Opera House, before coming back to let this journo have a quick selfie in a Wookie hat (as you do).

Life-size BB-8 doesn’t roll around, with this model being made for the promotional tour. In fact, it’s not even the same unit used in the movie, with Sphero’s Paul Beberian telling GadgetGuy that this BB-8 is more of a “fun way to tell the story”.

“The creature shop built the props,” he said, “and they built the ones that move around. We’re not a prop shop, and that’s why the painting on this one is different.”

That’s clear, too, even without the movie being released, because Sphero’s BB-8 looks like the Star Wars character with a clean paint job, compared with what the promotional posters are revealing which is a more weathered look for the droid.

For the most part, life-size BB-8 is an awesome prop that exudes an almost human sense to him, because it is quirky, playful, and there’s something instantly friendly about it.

You want to sit next to it and treat it like a pet, and given that it will just sit there taking it, that would probably be fine, too.

You can also do the same with pint-size BB-8, which will be the one most people will get to play with since it is available in stores across Australia.

Set to be the hottest toy this year, it’s about the closest thing to owning a virtual equivalent of R2D2 from when many of us were kids, and when Star Wars was the in-thing and the dream of bringing toys to life was just that: a dream.

Fast forward a good 30 years or so (a little more, actually), and that dream is one that can be made into a reality, with a toy that not only works as a remote control droid, but also as one that can patrol and do his own thing.

His sounds will be updated shortly to sound more like the movie, and Sphero is in the process of rolling out updates to the augmented reality holograms which allow a phone or tablet to simulate that “help me Obi-Wan Kenobi” moment from the first movie, albeit with with less emphasis on Obi-Wan because the new movie takes places decades after his death.

And Sphero will continue to make updates to his programming as time goes on, bringing more life to the character, and that tiny robot that kids of all ages can already get their hands on and play with.

Does that make it a living entity? Not really, but until robotics makers work out a way to deliver droids that feel like they can be our independent friends and coworkers, it will do nicely.

Sphero’s BB-8 is available now in stores for $249 ahead of the release of “Star Wars: The Force Awakens” on December 17.