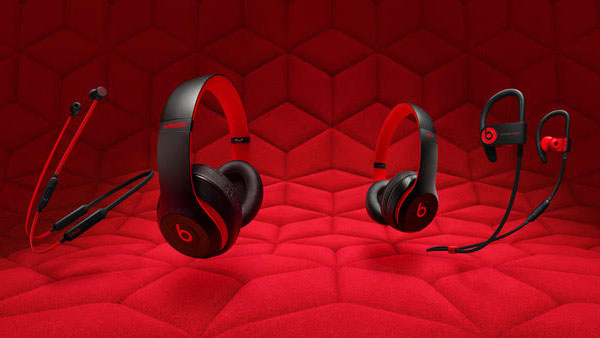 Apple reminds us that the then-new headphone brand, Beats by Dr Dre, was launched ten years ago, in 2008. To celebrate, it’s going red. (And black.)

Let us be clear, I used to hate Beats by Dr Dre headphones. When I reviewed the Beats Solo years ago, I found that they were so tight they squeezed my head uncomfortably, and the sound was awful. All bass. No treble or midrange. Since moving to Apple’s ownership, Beats by Dre has become first class. You can see our review of the current model Beats Solo3 headphones here. And our review of the BeatsX wireless earphones here. They are impressive.

Despite our distaste for those earlier models, Beats apparently dominated the US market for headphones costing more than a hundred dollars. By dominated, we mean 64%, or nearly two thirds, in 2011. By 2013 the company was valued at $US1 billion. The following year Apple reportedly paid $US3 billion to take it over.

Currently, there are four Beats by Dr Dre models available, although with a range of colours. The celebratory set is called the “Decade Collection”. Beats has selected a new colour scheme: “Defiant Black-Red”. That is, black with red highlights. They are the same price as the regular versions. All models use Apple’s W1 chip for long battery life and improved Bluetooth reliability.

For more active use are the Powerbeats3 earphones, priced at $259.95. These have over-ear hooks to ensure stability. They also have what must be a class-leading battery life of up to twelve hours. Finally, the entry-level BeatsX earphones — $199.95 – still manage an impressive eight hours of battery life.

You can buy Beats by Dr Dre headphones at various retailers, or directly from Apple here.